Early on in "Nappily Ever After," an adaptation of the first installment of Trisha R. Thomas’ eight-book series, Violet Jones (Sanaa Lathan) sits outside with her two best friends, and can't enjoy herself because she's convinced it's going to rain (even though the sun is shining). She keeps interrupting the conversation with the increasingly anxious question, "Are you sure that's not a raincloud?" Her anxiety comes from the fact that her hair is straightened, and she spends her life avoiding anything that will destroy the perfection of her hair. Late in the film she expresses exhaustion at how much time her hair upkeep has cost her. With humor and honesty, and grounded by very strong performances, "Nappily Ever After" (screenplay adaptation by Cee Marcellus and Adam Brooks) is the story of Violet's gradual—and sometimes painful—embrace of her natural hair.

Choosing to go natural involves breaking away from the exacting expectations of her mother Paulette (the wonderful Lynn Whitfield), whose obsession with appearances has dominated Violet's life forever. Mother-daughter bonding involved Paulette straightening Violet's hair at the kitchen table. Violet is now an advertising executive, living with a gorgeous doctor named Clint (Ricky Whittle), whom she hopes will pop the question soon. Everything is lined up in accordance with Paulette's wishes for her daughter, and Violet's wishes for herself. When Clint fails to propose, Violet calls him on it, and he tells her she's too concerned with being perfect, and—more brutally—"Being in a relationship with you is like being on a two-year first date." You can see what he's talking about, though, and you can also see what it costs her. Even during sex, she is concerned he will mess up her hair.

After Violet and Clint break up, she pendulums from rage to hurt to fear, each phase reflected in a new hairstyle (the film is broken up into different "chapters": "Straightened," "Weave," "Blonde," etc.) She throws a tantrum in a hair salon, getting the attention of the owner Will (Lyriq Bent) and Will's young daughter, Zoe (Daria Johns). Zoe is an independent young girl with natural hair, who sees right through Violet. She speaks her mind. Violet is so used to living in a world that rewards her for straightened hair she's not sure how to deal with people who don't care, who encourage her not to care. Violet's entire identity cracks apart. Paulette is there to remind her of her obligations, to make it work with Clint, to maintain perfection. No wonder Violet is a late-bloomer.

Years ago, an editor at Glamour gave a presentation at a New York law firm called the "Dos and Don'ts of Corporate Fashion," in which she told African-American women to avoid "political" hairstyles in the office ("political" meaning natural hair, and, God forbid, dreadlocks). (Jezebel covered the controversy heavily.) "Nappily Ever After" is a strong reminder of what straightened hair "signals." When Violet struts across a plaza to work, hair flowing in the breeze, she is rewarded with appreciative looks and double-takes from men. Once her straightened hair is gone, nobody looks at her. "Nappily Ever After" attacks this attitude from all sides. After she drunkenly shaves her hair off (in an extraordinary scene), she is invited by a well-meaning woman to attend a cancer support group. Hair, or lack thereof, is fraught with meaning.

Director Haifaa Al-Mansour is famous for being the first female director in Saudi Arabia, whose film "Wadjda" was the first film shot entirely in the Kingdom. "Wadjda" was about a little girl who wants to get a bicycle, and is told by her mother she can't because riding a bike might break her hymen. A radical film, especially considering the circumstances in which it was made, "Wadjda" brought Al-Mansour international attention (and a visit to Ebertfest, where "Wadjda" was screened). For her English-language debut, Al-Mansour directed "Mary Shelley,” a film that didn’t quite work although its themes of female oppression were an obvious dovetail with "Wadjda." In "Nappily Ever After," particularly in the mother-daughter scenes which echo the mother-daughter scenes in "Wadjda," Al-Mansour is on firmer ground.

Sanaa Lathan (who also produced) has been doing good work for years now, getting a lot of attention first for her performance as the tomboy-athlete in Gina Prince-Bythewood's "Love & Basketball." She was wonderful in "Something New," directed by Sanaa Hamri (if the world were fair, Sanaa Lathan would have moved into above-the-title leading lady status on the basis of that performance alone). In "Something New," she portrays an uptight woman who surprises herself by falling in love with her white gardener (Simon Baker). There's a painful scene where, after having sex for the first time, he asks about her hair. "This isn't a wig, right?" She flips out, traumatized by his cluelessness, by a lifetime of being worried about her hair. A couple of scenes later, she gets the weave taken out, shocking her appearance-conscious mother (Alfre Woodard). "Nappily Ever After" covers similar territory, but brings it front and center.

And about that scene where Violet shaves her hair off: Here’s where actress and director come together, where Lathan is truly a co-creator. A lesser director might have edited the scene up into small fragments, showing Violet going from a full head of hair to no hair in a montage, holding back the "full reveal" until the end. Instead, Al-Mansour places the camera in one spot, and Lathan stares right into it as though it's a mirror. She then shaves her entire head. It takes a while. Al-Mansour is not impatient. Violet goes through every emotion under the sun as she shaves her head. She weeps. She gasps with terror as she watches her hair fall away. She bursts out laughing. Sometimes she laughs and cries simultaneously. She's also wasted. She goes through a catharsis so extreme that by the end of it, she is wrung dry. So are we.

Not every actress is capable of pulling off what Lathan pulls off in this scene. She's fearless.

There are some plot elements which stand out as self-conscious literary devices, like her new love interest being a man who's developed a product line for natural hair, as well as her advertising job selling impossible beauty ideals to women. But "Nappily Ever After" is as much a polemic as it is anything else. In a confrontation with Clint, Violet says she is sick of how much brainspace is taken up with her hair. "It's like having a second full-time job," she exclaims, exhausted. The ending, when it comes, is not what one might expect, but it feels right. 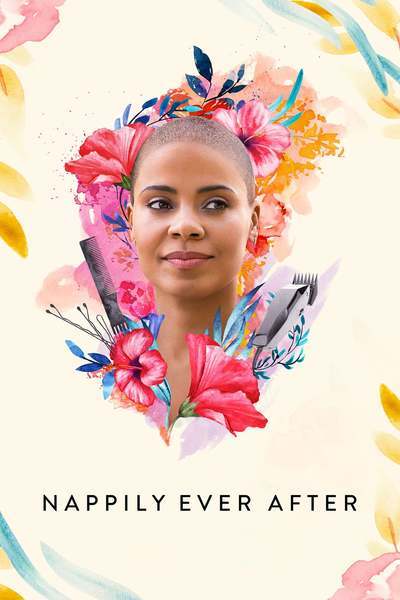 Lyriq Bent as Will

Writer (based on the novel "Nappily Ever After" by)