My Name is Emily

Watching a film, or I should say successfully watching a film, usually requires a willed suspension of disbelief. I’d say the same thing goes for making a film. In spite of technology that assists creative artists in getting more technically credible results with less work and for less money than in the past, making a film is still such an illogical process that successfully completing one requires a faith that passeth understanding.

“My Name Is Emily” is in many respects an average and in several respects a kind of clichéd and frayed coming-of-age movie. The protagonist, Emily, kicks off the film by speaking to the audience, relating her quirky childhood as the only child of an eccentric academic who becomes a best-selling author and a mother who dies too soon. She repeats apercus from her dad along the lines of “If you hide from death, you hide from life” and contributes cranky questions of her own to the narration like “Why do we smile in photographs?”

The best thing about Emily is that she’s played by Evanna Lynch. Lynch, who played the charmingly abstracted Luna Lovegood in some of the Harry Potter pictures, has grown into a young woman who looks like a rougher-edged Saoirse Ronan, and she brings a gritty conviction to the antisocial tendencies that Emily cultivates after her beloved dad, played by Michael Smiley, is carted off to a lunatic asylum. Now with foster parents, she immediately alienates her new schoolteacher with a biographical approach to literary criticism, disclosing to her classmates that all that talk in Wordsworth about “splendor in the grass” is about sublimated sexual transgression and guilt. This and more put stars in the eyes of her handsome, upper-crust classmate Arden (George Webster). Emily couldn’t be less interested. But then she does not receive her customary birthday card from dad, and Emily is forced to solicit her only potential friend on a mission to drive to the institution and confront the old man, and maybe even break him out of the joint. She calls on Arden at home just as he’s getting a snootful from his awful dad, and before Arden can even say to dad “Next time you hit me, you better knock me out,” you’re thinking “Road Trip!”

And off they go, abetted by a kindly grandma and her vintage auto (and its attendant eight-track player, and John Dankworth tape, even). Their exchanges, given Emily’s emotional blockage, are predictably prickly. “You make me feel stupid,” Arden helplessly protests to Emily at one point. “Sorry … ” Emily responds, “that’s the nicest thing anyone’s said to me.” I guess the point where I lost patience with the movie was when the duo finally made it to the asylum, and Arden decided to distract the inmates by doing an amateur pyrotechnics show on the roof of the drab facility. Your mileage may vary.

What all this has to do with my ruminations at the beginning of the review is this: “My Name Is Emily” was made under more-arduous-than-usual filmmaking circumstances. Its writer/director, Simon Fitzmaurice, is afflicted with motor neuron disease, a condition similar to ALS, which is famously suffered by physicist Stephen Hawking. Mr. Fitzmaurice is confined to a wheelchair and can write and communicate with the assistance of a computer that he interacts with via the movement of his eyes. So, for him to have completed this feature, almost a decade after a diagnosis that at the time had him living for only another four years, makes “My Name Is Emily” a miracle in a way that most other movies aren’t, even if you allow that all successfully completed movies are some kinds of miracles. It also means that if you’re a human being you have a rooting interest in Mr. Fitzmaurice.

What’s the line between “I wish I liked this movie better?” and “I wish this movie was better?” That’s a knotty question. I will say that one aspect of this film for which I have unqualified enthusiasm is the way Mr. Fitzmaurice and his cinematographer Seamus Deasy shoot the various Irish locations, and how they place the characters therein; the effect is often beautifully picturesque without being in the least bit touristy. The sense of place is so palpable you can almost feel the raw wind going through the characters’ hair in the seaside-set scenes. It represents the movie’s most seductive achievement. 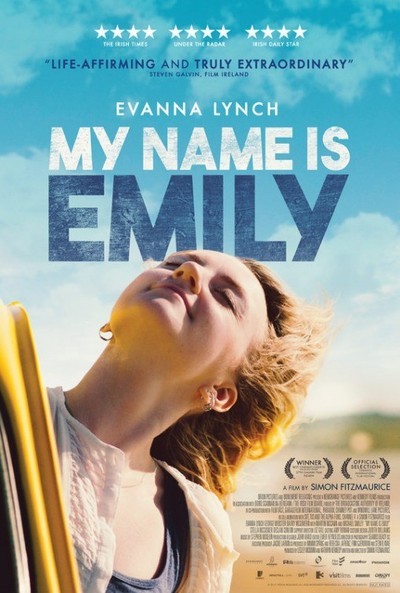