My Days of Mercy

The meet-cute (AKA when two characters first start a romance) that kicks off “My Days of Mercy” has to rank as one of the oddest ever put before a movie camera—it may not be humorous or cute, per se, but it is certainly one of the most unusual that I can recall seeing. Unfortunately, the rest of the movie never comes close to approximating the sheer audaciousness of this bit, instead squandering it on a well-meaning but increasingly contrived melodrama that is hardly believable or meaningful.

As the story opens, we see Lucy (Ellen Page) on what appears to be a road trip in a dilapidated Winnebago with her older sister Martha (Amy Seimetz) and much younger brother Benjamin (Charlie Shotwell). It turns out that they are anti-death penalty activists who travel to protest at the sites of imminent executions in opposition to the pro-death penalty forces that have also turned out. After arriving at their destination, she catches the eye of a young woman on the other side of the protest named Mercy (Kate Mara), a budding lawyer who is there because the man being executed killed her cop father’s longtime partner. Before long, Lucy finally admits that her anti-death penalty stance is even more deeply personal than Mercy’s position—her own father (Elias Koteas) is facing his own imminent execution date for killing her mother.

Despite the enormous gulf between them on this particular issue, there is an undeniable spark between them that continues on as they meet up at various stops on the execution circuit and chatting online before the relationship inevitably, if secretly, blooms into a full-blown romance. While Martha has effectively dedicated her entire life to proving her father’s freedom—her only other activity seems to be sometimes sleeping with the lawyer (Brian Geraghty) who has taken the case—and Benjamin is too young to remember his father as anything but a prisoner that he has hardly seen, Lucy is a little more conflicted and this unexpected relationship with Mercy offers her a genuine taste of freedom for once. Alas, things prove to be not that simple after all. It eventually transpires that Mercy may not have been completely forthcoming regarding certain aspects of her life. Another problem arises when Mercy offers to help Lucy with her family’s case by pointing them in the direction of new tests that could be applied to the old evidence that could prove that her dad is innocent—the flip side to that being that the very same test could also conclusively prove his guilt.

In case you hadn’t figured it out by now, “My Days of Mercy” is an Issue Movie but while most films of that type are satisfied with focusing on one key issue, Jim Barton’s screenplay tries to cram so many of them into 108 minutes that the late Stanley Kramer, who spent nearly his entire career on making issue-oriented projects as a producer and director, might have advised him and director Tali Shalon-Ezer to ease up a bit. Perhaps there is a way of taking all of the various story points of the sort on display here and transforming them into a convincing narrative but that has not happened here. Instead, the narrative feels more like a checklist than anything else, and contains too many scenes that exist simply to move the story along even though doing so requires the characters to act in sometimes befuddling ways.

What is especially frustrating in the case of this film is that it is just good enough at times to suggest what might have been accomplished with a more plausible screenplay. The performances by Page and Mara are strong and convincing and generate real heat between them, at least during the scenes where they are able to break free of the machinations of the screenplay; the same thing goes for Amy Seimetz’s turn as the older sister. Making her American debut, Israeli director Shalom-Ezer demonstrates a good eye and a nice feel for character work that eventually gets subsumed beneath all the murky melodrama and emotional cop-outs. There are even brief moments of humor that cut through the gloom—after catching the lawyer leaving after spending the night with Martha, Lucy snark-bombs him with a comment about his “pro-boner” work—and a running bit about prisoner last meals that has an unexpectedly moving payoff.

“My Days of Mercy” has an undeniably intriguing premise, but does not have any strong ideas about how to bring it to life. As a result, it quickly becomes a crashingly obvious (right down to actually naming one of the characters Mercy, a move so remarkably unsubtle that the film itself actually winds up commenting on it) and dramatically implausible work that cannot even be saved by the contributions of such talented actresses as Page, Mara and Seimetz. Ironically, it is a film that could actually unite people on both sides of the death penalty issue, nearly all of whom will probably come away from it thinking that it is a film with a interesting premise that really deserved, no pun intended, a much better execution. 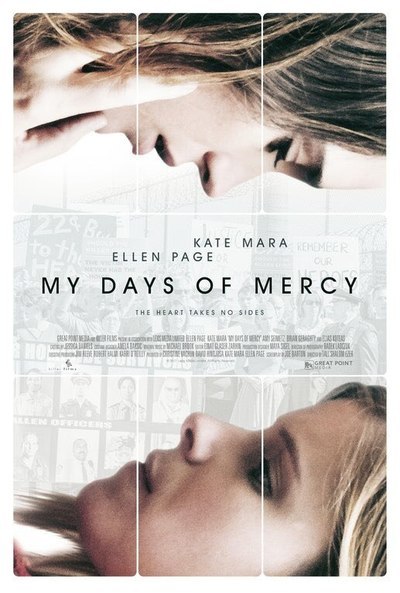