This movie begins with a few noncommittal scenic shots of rural England and a man saying in voiceover, “Did she? Didn’t she? Who’s to blame?” Hearing this, I thought, “Well, that’s no ‘Last night I dreamt I went to Manderlay again.’” Not fair, maybe, but “My Cousin Rachel” is, like Alfred Hitchcock’s “Rebecca,” based on a novel by Daphne du Maurier, master of the moody semi-Gothic romantic thriller.

As it happens, du Maurier’s novel “My Cousin Rachel” has an entirely different and hookier opening line: “They used to hang men at Four Turnings in the old days.” One feature of this movie, written and directed by Roger Michell, is—I’m assuming here—a new conception of its protagonist, the novel’s unreliable narrator. His name is Philip, and after wondering who’s to blame, he gives a brief accounting of his life. Orphaned, brought up by an adult cousin named Ambrose, sent to school. Philip cops to not having liked books. He cops to not liking much of anything, besides hanging out with Ambrose in a dusty manse whose interior looks like the gatefold sleeve picture of a mid-70s Jethro Tull album. Ambrose runs some kind of land-based business—he has a lot of workers walking around wielding scythes. It’s all very pre-Victorian man-cave like, and Philip insists that’s what he likes, but then, oh no, cousin Ambrose falls ill and gets sent to Italy, because that’s what you did when you were sick and lived in England. From there Ambrose writes letters detailing his recovery, and the TLC he receives from yet another cousin, a young woman named Rachel. But then comes news of Ambrose’s death. Philip is both heartbroken and indignant, and blames this Rachel person. To his godfather and estate lawyer, and his daughter Louise, who clearly pines for the young now-master-of-Ambrose’s-estate, Philip vows revenge. Then Rachel shows up.

And she’s played by Rachel Weisz, so, you know. Nevertheless, the speed with which Philip transforms from would-be avenger to slack jawed google-eyed “let me give you all my mother’s jewelry” dope is kind of astonishing. First he insists that she stay in the mansion, which he and Louise have managed to clean up so it’s more Jane Austen than Jethro Tull. Then he gives her access to his accounts. Eventually, he decides to turn over all his worldly goods to her on his 25th birthday. In return, he wants … well, he’s not quite so indelicate as to articulate it.

This is an arguably juicy narrative, especially when intercepted letters and other items start to cast suspicions on the seemingly pure-and-true Rachel, and after Philip contracts a nasty virus that could in fact be related to the herbal “tisanes” that Rachel concocts and practically force-feeds the fellow. But “My Cousin Rachel” is an impossibly turgid film. From the moment it opens, it’s constantly indicating menace and heightened emotion, but never doing anything to genuinely evoke it. Rael Jones’ music is the main culprit here, but the film’s most blatant disaster is Sam Claflin’s performance as Philip. From the first minute Claflin presents the character as a kind of period bro, albeit one whose default mode of dealing with his environment is a sneering entitled truculence.

The character’s ingenuousness is meant as a kind of virtue, at least I think it is, but Claflin’s sneering, furniture-smashing, and banality make Philip impossible to care about. As for Weisz, she’s not given much to do besides be tender and/or affronted; the plot, such as it’s been adapted for this film, hinges on her character being kind of unknowable, so we’re left with a good-looking cipher, through no actual fault of Weisz’s. And Michell’s direction is both overstated and incoherent. Plot threads are inexplicably left to hang, only to be picked up at a later point when the viewer has pretty much been obliged to move past them. Focus tricks in individual shots, and unwarranted camera movements meant to create a sense of unease merely elicit the response “what’s THAT about?” Michell has made watchable films in the past—you may like “Notting Hill”; I was more partial to “Venus”—but this literally looks like a picture made by someone who’s forgotten how to direct.

Incidentally, the du Maurier novel was made into a picture years ago, with Olivia de Havilland in the title role and a young Richard Burton as Philip. Big shoes to fill, but I honestly don’t even think that was an issue (the movie is not well-remembered today except by devoted fans of its stars) in the creation of this movie. One of the problems with this “My Cousin Rachel” is that it’s hard to come up with any issue or reason relative to its creation, I’m afraid. 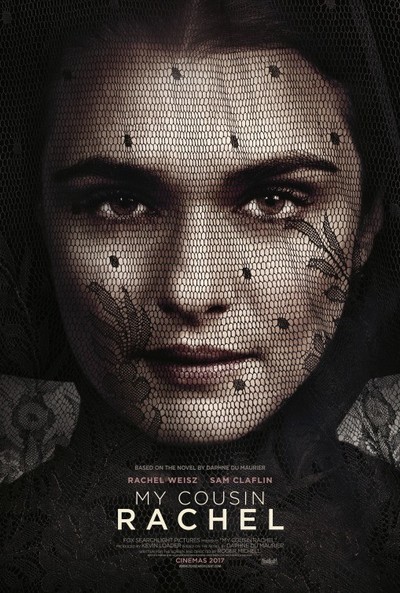 Rated PG-13 for some sexuality and brief strong language.