Bill (Nick Kroll) has been overshadowed by his brother Robbie (Adam Scott) since a childhood accident resulted in Robbie becoming blind. Robbie took his disability as a motivation to prove that he could rise above it. Bill has been supporting his brother's efforts, which involve displays of physical endurance to raise money for a charitable organization for the blind. In the process, Robbie has become a local hero, while Bill works at a dead-end job at a printing shop when he isn't helping his brother train for the next event.

Lest the setup of "My Blind Brother" begin to sound too inspiring in terms of overcoming physical limitations and sacrificing one's own desires for a loved one, it must be pointed out that neither Bill nor Robbie particularly seem to like each other. Bill hates to exert himself physically. He also resents that Robbie uses him as something akin to a guide dog and that no one seems to notice his role in Robbie's efforts.

As for the brother's feelings toward Bill, Robbie gives a big speech after a marathon-length run. He builds up to thanking the one individual who has been with him through it all—the voice in his ear telling him to keep going. That's when he acknowledges the big guy upstairs. The wording of the build-up seems to take Robbie's omission beyond forgetfulness or ignorance and into the realm of intentional slight.

Writer/director Sophie Goodhart opens the film (her first feature, based on her short) on these specific notes of conflict. That turns out to be vital to the success of the film, which quickly becomes a situational comedy about a scenario in which a little bit of honesty from any of the involved characters probably would resolve the plot in an instant.

Even the brief time Goodhart spends with these characters before the beginning of the plot's conflict is enough to establish the reason that such a quick, simple resolution is impossible for these people. They are inclined to lie—to each other, in order to keep their relationships relatively nice and calm, and to themselves, in order to keep up the other lies. These lies aren't malicious. These are fairly decent people, and they lie because they want to stay decent—or at least to keep up the appearance of being good people.

The plot involves a romantic triangle of sorts, although it's probable that there are no romantic feelings on the part of Rose (Jenny Slate), the woman who becomes involved with both brothers within a short span of time. She meets Bill at a bar where there's a memorial for her late boyfriend, who was hit by a bus while running after her. He was running because she had just dumped him, and Rose blames herself for the guy's untimely demise.

She and Bill have a one-night stand. He wants more, but she turns him down, saying that any relationship she might have now would be doomed.

Feeling a need to make up for "killing" her boyfriend, Rose volunteers to help Robbie prepare for a swim across a lake for charity. Robbie misinterprets Rose's helpfulness as something more. When she corrects him, he's embarrassed, and wanting to save him from that embarrassment, Rose kisses him.

The two start dating. Bill, of course, now has another reason to be jealous of his brother.

The comedy here goes deeper than the awkward situation or the ways in which Bill and Rose try to hide their recent entanglement from Robbie. Goodhart allows her characters to be a bit pathetic, to possess some despair, and to have qualities that don't exactly endear them to us.

Bill is lazy and unmotivated, and whatever drive he has left revolves around his need to one-up his brother. The joke is that there's no way he can win. Robbie is an inspiration because he is everything that Bill isn't. Bill won't call out his brother for his negative qualities because he doesn't want to be the guy who would shame his blind brother (There's also some guilt on Bill's part, hinted at early in the film and made explicit by the end). Bill's only recourse is to offer immature, sarcastic snipes when nobody is paying attention to him (which is often).

Rose has a co-dependent streak. Her entire sense of self-worth is based on what other people think of her. When the parents of her dead boyfriend run into her and Robbie at a restaurant, she finds herself trying to apologize for how she has started dating again, and then she has to apologize to Robbie for the other apology.

In a rather daring turn, Goodhart makes Robbie the most irksome of the bunch. He's spoiled, self-absorbed, and superficial. He worries that Rose doesn't live up to his standards of physical appearance, and at one point, Bill nearly sabotages his brother's romance by lying that Rose has an unsightly birthmark on her cheek. There's an occasional sense that Goodhart has tipped the scales against Robbie on the personality front, if only to justify a few jokes that depend on his disability and, mainly, to excuse Bill for what happens during the climactic swim. Scott's performance leans perhaps a bit too heavily toward Robbie's jerk side, although, as written, there isn't much more to the character.

Kroll and Slate, though, give performances that have the opposite effect. They aren't the best people, but the relative goodness of their intentions is never in doubt. "My Blind Brother" puts these characters through the comic wringer, but the humor is founded on the characters and their flaws, not the circumstances. 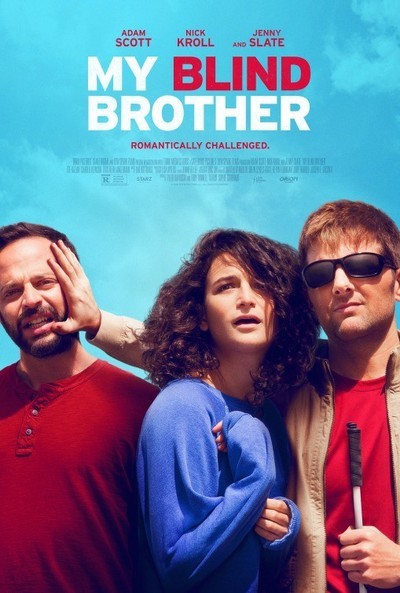 Rated R for language, some sexuality and drug use.