Bollywood musical "Munna Michael" is too many movies crammed into one. This formulaic but satisfying crowd-pleaser shifts its focus from one protagonist to another so many times that it's hard to tell whose story and emotions matter most. It only begins as a "Saturday Night Fever"-style celebration of lead protagonist Munna Michael (Tiger Shroff), a talented, self-absorbed dancer who hustles less-talented dancers by betting that he can out-dance them. The kicker is that all of Munna Michael's dance moves—and some of the film's song lyrics—are inspired by Michael Jackson.

But soon enough, Munna Michael gets banned from local Mumbai dance clubs, and moves to New Delhi. While there, Munna Michael's story turns into a lumpy action-comedy: he tries to teach gangster Mahindar (Nawazuddin Siddiqui) how to dance. But Mahindar only wants to dance so he can impress night-club dancer Dolly (Nidhhi Agerwal), who immediately becomes the object of Munna Michael's affection. He then tries to helpt Dolly realize her dream of winning the top prize on "Dancing Star," a "So You Think You Can Dance"-style competition show. Which brings us back to Munna Michael, a character who hides his dancing career from his sick father (Anupam Shyam), a former Jackson-inspired dancer.

At this point, Munna Michael stops being the lead of his own film, and starts looking like a cliche-dispensing Swiss army knife. How many masters can one man serve? He's proud, and independent, like his idol, so his inability to dance out in the open automatically hobbles the film's plot. Munna Michael's also a foil for Mahindar, and his earnest quest to win Dolly's affection, which is sometimes annoying since Mahindar is simultaneously depicted as a clueless nebbish, and a raging brute. And then there's Dolly's story, a largely uninspired "putting on a show"-style musical that only comes alive when Munna Michael and his crew of back-up dancers hit the dance floor.

Thankfully, the film's set pieces are a treat. At this point, "Munna Michael" stops being held back by inconsistent characterizations, and cuts loose with derivative but viscerally satisfying musical numbers. Munna Michael's style is a mix of break-dancing spins and jumps and Jackson-style joint-bending, limb-twirling, gravity-defying showmanship. When Munna Michael hits the dance-floor, viewers can enjoy Shroff do his thing thanks to the use of wide-angle lenses, lavish sets, and talented back-up dancers. These are moments where logic, as we know it, stops being important, and back-up dancers materialize out of nowhere. Not even a bullet can stop Munna Michael: he leaps, jumps, and pirouettes his way around in an infectiously joyous way. You've probably seen dancers that are at least this good before on "So You Think You Can Dance," and Shroff is admittedly not the most charismatic Bollywood leading man. But Shroff does well within the limited range of his character's "Tony Manero: show-stopper" style.

Shroff is also good enough to make slow-motion-intensive action scenes work. These scenes are not the most well-choreographed fight sequences you're likely to see. In fact, they're just a touch over-edited, and feature too many scenes that emphasize the blunt impact of flying into bicycle kicks and/or windshields, concrete roads, glass windows, what have you. That having been said, there are several moments of cocky joy during these scenes, like when Shroff glides across the hood of an off-road vehicle in order to emphasize the car's brand. It's such a brazen move pulled off with such winning dickish-ness that I almost stood up and cheered. Moments like these are the real reason to see "Munna Michael," a collage of superior films' better ideas that works best when its characters are flexing their muscles, and acting like they're as talented as they are boastful.

Unfortunately, only Shroff gets to look really good. Mahindar is embarrassed repeatedly whenever he tries to dance: his childish dance moves prove what Munna Michael tells his competitors early on in the film: some people just can't dance very well. That hint of elitism is fascinating, but not particularly well-developed. If anything, that mentality is underwhelmed by Aderwal's first solo dance number, the one that's supposed to catch Munna Michael's eye, and win him over. It's also evident in the scene where Munna Michael and Dolly serenade each other ... in the middle of the desert? This probably seems more out there than it actually is since there's an unwritten rule that requires most contemporary Bollywood films to include at least one desert/ancient ruins-set slow dance/serenade. Still, in this specific case, the scene undermines the suggestion that some people are just born to dance while others can train constantly without ever becoming great.

"Munna Michael" is not always great. It constantly fluctuates from being the kind of film I want to like to a giddy popcorn flick that doesn't know its own strengths. Still, "Munna Michael" has enough high points to make it the kind of film I'm glad I saw on a big screen. It's noisy, silly, and sometimes rather fun. I just wish it weren't such a hot mess. 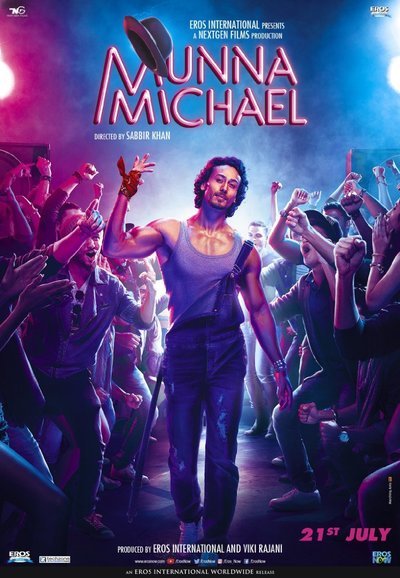