The British WWII drama “Munich - The Edge of War” starts off as a prim spy thriller and ends as an insufferable civics lesson. And while most of the movie (an adaptation of Robert Harris’ novel Munich) concerns two fictional diplomats from opposite ends of the Axis/Allies divide, the plot of director Christian Schwochow's movie centers on real events, particularly the 1938 Munich conference and its thwarted peace agreement between Germany and England. The film also features a few scenes with British Prime Minister Neville Chamberlain (Jeremy Irons) and oh yeah, German Führer Adolph Hitler (Ulrich Matthes).

Once Hitler enters the picture, “Munich - The Edge of War” inevitably flirts with the old thought experiment about whether or not you would go back in time to kill a genocidal fascist. This movie’s tempered, heavily qualified answer is not only upsetting, but also built up to in such a way that, even when the movie’s not a stuffy kind of historic fan-fiction, it’s still presented with drab cinematography, insistent dialogue, and contrived dramatic twists. “Munich - The Edge of War” would still be charmless and drawn-out even if its pleas for down-to-the-wire tolerance weren’t made by polite gentiles who are constantly shown to be thinking about their responsibilities to their country (however that’s defined), without addressing the Jews who were threatened, demonized, and then exterminated by the Nazis.

But it was a different time, you might say even before seeing the movie’s leaden introductory flashback: we join three college buddies at Oxford University in 1932 as they drink champagne, gawk at fireworks, and declaim about their “mad generation.” It’s the end of an era for these kids since their comfy bubble is about to go pop. Proud German transplant Paul (Jannis Niewöhner) yells about the German “identity” to his unconcerned British friend Hugh (George MacKay) and his soon-to-be ex-girlfriend Lenya (Liv Lisa Fries). Six years later, Paul, now working in the German Foreign Service office, covertly schemes to expose Hitler with some colleagues while Hugh, a secretary at the British Foreign Ministry, bonds with and eventually tries to advise Chamberlain on how to negotiate with Herr Hitler.

Most of the plot twists in “Munich - The Edge of War” serve to frustrate viewers’ expectations and rarely in productive ways. There’s some engaging ticking-clock suspense whenever Hugh tries to show the PM vital information, including a top secret document that reveals Hitler’s real intentions. There’s also a few entertaining scenes where Irons holds court and, while in character, repeatedly gives Hugh what Chamberain, in a later scene, calls “a lesson in political reality.”

But generally speaking, the plot and characterizations of “Munich - The Edge of War” are defined by an academic sort of contrarianism. For example: Paul starts off as a card-carrying nationalist, but soon reveals himself to be a militant anti-fascist. And while the Jews are represented in a few token scenes, their fate’s never really considered since, again, the movie’s protagonists are all very goyish.

The stakes could not be lower: in one scene, Chamberlain emotionally confesses to Paul (while restocking a bird feeder with bread crumbs) that he wants to avoid war at all costs because he considers the peace won by WWI to be “sacred.” And while we know that Paul is right when he says that Hitler won’t be stopped by a peace treaty, we’re also meant to respect how much work Hugh puts into facilitating a covert meeting between Paul and the PM. It’s an unheard of consultation, the results of which only force an increasingly desperate Paul further down a dead-end path of historic speculation.

The movie’s hyper-qualified and ostentatiously balanced conclusion might not be enough for some viewers who are tired of seeing their humanity reduced to abstract thought puzzles. But that’s essentially why “Munich - The Edge of War” is, both formally and ideologically, too conservative to be an appreciable centrist parable—if we can only play with the political cards that we’re dealt, then why bother using the past to play out “What If” scenarios involving Adolf Hitler in the first place?

“Munich - The Edge of War” challenges viewers to accept some harsh truths about the “political reality” of war, but its creators never stoop low enough to earn our trust or sympathy beyond the protagonists’ mildly tense hypothetical circumstances. The movie strings viewers along with its placid tone and superficially compelling situational drama right until it asks us to respect its convoluted logic, and then brusquely shows us the door. 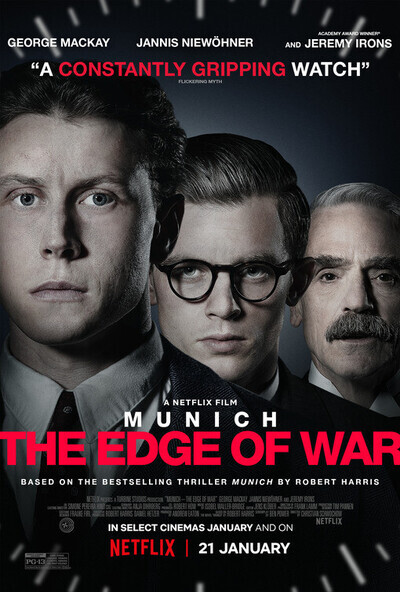