Slow-burn horror-thriller "Most Beautiful Island" is sadly most frustrating when its creators are slowing down long enough to make you care about Luciana (writer/director Ana Asensio), a Spanish immigrant living in New York City. Asensio spends a lot of time trying to make viewers appreciate the day-to-day headaches, and upsets that lead Luciana to a shady party, where she's promised $2,000 just for standing around, and looking attractive. But many of the scenes that contextualize Luciana's desperation are so shrill, and so dramatically threadbare that one can't help but feel like you're being confronted by a homeless person who won't take no for an answer. Luciana is a sympathetic character, so denying her humanity feels tacky. But, until her plight becomes emotionally engaging during the film's creepy finale 20-30 minutes, watching "Most Beautiful Island" is an unproductively unpleasant experience.

To be clear: Asensio is not a lesser filmmaker for trying so hard to get viewers to like Luciana. Rather, the way that she depicts Luciana's pre-horror-party life is regrettably wearisome. It's a perfect storm of flat line-readings, blunt dialogue, and monotonously exhausting pre-party scenes. Eventually, I stopped feeling bad for not caring enough about Luciana's plight, and started waiting for Asensio's story to either end, or get more interesting. Thankfully, the latter happens before the former can.

So, yes, Luciana does eventually attend a sketchy party, because she needs money to make ends meet. But until then, we watch her life spiral out of control, and repeatedly hit rock-bottom. Because Luciana has no options at this point, so she has to barrel through several nightmarish experiences, any one of which could sink someone's day. She runs out of money on the pre-paid phone card she calls home with. This is after she has a trying phone call with her mother, who begs her to return to Spain, and tries to convince Luciana that people have forgiven her for an unexplained trauma. Still, Luciana presses on. Because her rent is due, as her roommate's passive-aggressive fridge post-it note insists. And Luciana's barely scraping by with her two jobs: costumed mascot for a fried chicken restaurant, and baby-sitter for two bratty children. She always runs late for her baby-sitting job, so her two pint-sized charges walk all over her, demanding ice cream, running off, and threatening to tattle on Luciana.

And through it all, Luciana never has any money. She barely skates by thanks to the kindness of strangers, and the eternal promise that she'll be able to pay them back tomorrow. Which, again, is theoretically sympathetic. But after a certain point, watching "Most Beautiful Island" really does grind away at you.

The storyteller's manner of address is assaultive, and lifeless. Asensio won't take no for an answer, and she just keeps piling on scenes that demand viewers not only understand her character's dilemma, but appreciate that there are very real conditions that could lead an unattached female immigrant to agree to attend a creepy party in an undisclosed basement. There are many warning signs that Luciana willfully ignores, particularly the fact that fellow chicken mascot Olga (Natasha Romanova) does not provide many details when she offers to hook Luciana up with this seemingly easy, one-off gig. But Luciana has to go, and viewers must understand that.

Still, Asensio puts words in her character's mouth that a more experienced filmmaker wouldn't, like when Luciana wanly laments to Olga that "I'm sick of the possibilities." And there are several scene that just feel too long, and pushy, like the protracted scene where Luciana struggles to find the first mysterious location where she thinks the party is being held, only to be ferried to another location, get into a low-key altercation with a cabby, and then finally arrive at the creepy basement party. There's also the overlong scene where Asensio bullies, pleads, and screams at a pair of children because, again, she has no other options. These are sympathetic problems. But Asensio gracelessly pelts viewers with her character's problems, and demands that we passively accept the horror of this experience.

Thankfully, the creepy party that Luciana attends is actually creepy. Its industrial/wine cellar dungeon vibe is relatively quiet, and therefore atmospheric enough that you want to like Luciana again. Your imagination starts to work overtime, asking questions like Why are none of the other party guests talking to each other, Why are guests being filed into a sealed room one-by-one, and What's behind that door that's making paid guests look like they just survived a great ordeal? The answers to these questions are engaging, albeit in a pulpy, over-the-top way. I wish Asensio went further over-the-top, but she stages her party scenes so well that I was drawn in regardless. "Most Beautiful Island" may take a while to get going, but once it does, you'll be eager to see what Asensio does next. 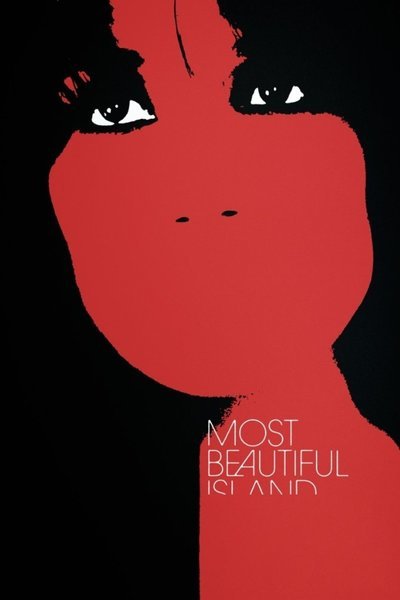 Miriam A. Hyman as Bikie

Fenella A. Chudoba as Alina