Almost 30 years after “Mortal Kombat” changed the fighting game landscape forever, a reboot to the film franchise based on these brutally violent games arrives in theaters and on HBO Max for 30 days. Here’s the important thing for fans to know: it’s as R-rated as the games themselves. For the first time really, the truly gruesome appeal of “Mortal Kombat” makes it to the big screen, complete with some combo fighting moves pulled directly from the games, certain character-based catch phrases, and even a few famous fatalities—the finishing moves that included spines being ripped from bodies through the top of your opponent’s head. There are some showdowns that will appeal to people who have played all of the “MK” games (which includes yours truly, believe it or not), including match-ups that involve now-classic video game characters like Sub-Zero, Kano, Raiden, and many more. While the film comes to life in ways that video game flicks often fail to do in its action scenes, it grinds to a halt during a deadly long training/destiny centerpiece that drags the film out to almost 110 minutes, and then it ends with a whimper, setting up what feels like a franchise instead of providing a satisfying finale. Sure, video games aren’t exactly known for closure, but so much of “Mortal Kombat” feels like set-up that you’ll just wish someone could have ... finished it.

Simon McQuoid makes his directorial debut with “Mortal Kombat,” which has basically been in production for a quarter-century given there was supposed to be a third film from the ‘90s series that launched Paul W.S. Anderson, but fell into development hell after the failure of 1997’s abysmal “Mortal Kombat: Annihilation.” McQuoid works from a script by Greg Russo and Dave Callaham that’s clearly familiar with the source material, dropping in fan favorites like Raiden and Liu Kang but also digging a little deeper to bring to life characters like Mileena and a truly dodgy CGI version of Goro.

An effective prologue opens the film in 17th century Japan as Lin Kuei assassins led by Bi-Han (Joe Taslim) attack Hanzo Hasashi (Hiroyuki Sanada) and his family, killing Hanzo’s wife and son with his, shall we say, freeze power. The choreography in this first scene is surprisingly strong, blending moves familiar to “MK” fans with a level of intense combat that you don’t really see made by Hollywood anymore—think blades stuck through the tops of heads. Hanzo is killed by Bi-Han, but his spirit is taken to the Netherrealm, where he will become ... well, fans of the games know but the movie keeps it a secret long enough that I won’t spoil it here.

The film then jumps forward to reveal that Outworld has won nine out of ten tournaments in Mortal Kombat, meaning one more will spell the end of Earthrealm. Because villains never play fair, Shang Tsung (Chin Han) decides to rig the final tournament in a sense by preemptively killing the champions of Earthrealm, sending his fighters to dispatch them one by one. An MMA fighter named Cole Young (Lewis Tan), a new character to the MK universe, has always wondered what his dragon birthmark means, and discovers that he’s one of the aforementioned champions when Sub-Zero comes for him and his family. Jax (Mehcad Brooks) tries to warn him of his destiny before getting his arms frozen and ripped off by the classic video game villain. It may not be for those easily turned off by violence, but the truth is that “Mortal Kombat” really comes to life in these fight sequences and their fatalities—finally putting on film what fans of the games have loved for so long in a way that most people thought they would never really see. You'll wish there were more of them. After a strong first act of MK one-on-one combat, it becomes less of a focus, much to the detriment of the movie.

Cole finds his way to Sonya Blade (Jessica McNamee), who, along with a wisecracking Kano (Josh Lawson), takes our truly bland protagonist to Raiden’s temple to train for the upcoming tournament. And here’s where “Mortal Kombat” grinds to a halt, where each character has to spar to learn their “arcana” or special powers and the self-serious dialogue spins its wheels around destiny and responsibility. It’s a shame that the producers of “Mortal Kombat” movies are convinced that there needs to be long training/prep sections in the middle of their stories. No one wants to play a tutorial an hour after they’ve started the game. And the wheel-spinning here drains all possible momentum for a movie that runs close to two hours. It should really be illegal to make a video game film that’s almost as long as "Judas and the Black Messiah."

“Mortal Kombat” recovers a bit with some climactic fights, including a pretty strong one between the two most legendary characters in this franchise. But long before then, fans will probably know how they feel about this flick, one that’s undeniably better than “MK: Annihilation” but feels unlikely to me to maintain the same nostalgic kick as the original Anderson film. There’s enough strong choreography and direct appeals to the fan base to keep them just barely entertained long enough to go back and play one of the excellent recent editions of this series (2019’s “Mortal Kombat 11” is stellar, by the way). Maybe that’s all that matters. But it sure doesn’t feel like the cinematic fatality that fans truly deserve after all these years of fighting.

In theaters today and on HBO Max for the next month. 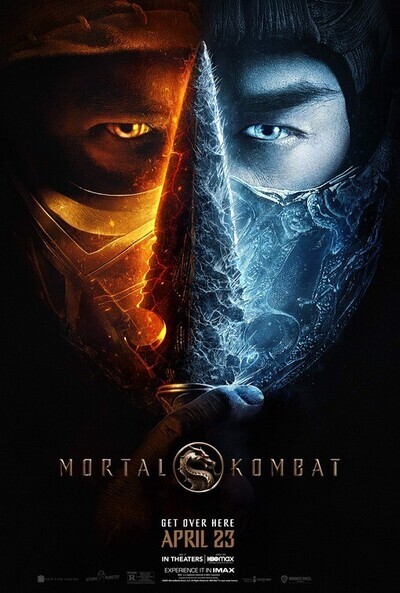