Imagine rummaging around a flea market and finding a slightly worn-out VHS tape of one of those Amblin kid wish-fulfillment adventures from the ‘80s and ‘90s—“E.T. The Extra-Terrestrial,” “Gremlins,” “The Goonies,” “Batteries Not Included” and the “Back to the Future” trilogy. You know, the type of fantasy where the youngsters discover that something weird and wonderful lurks in their midst while the preoccupied adults have no clue what is going on.

That is the way it often feels like to watch “Monster Trucks”—an attempt to recapture this old style of storytelling, now boosted by 21st-century special effects—but without having to excavate that dusty VCR from the basement. This first live-action effort from animation director Chris Wedge, whose Blue Sky Studios are behind the “Ice Age” franchise, arrives in theaters with a somewhat battered reputation after Paramount delayed its release several times and then took $115 million write-down against expected losses on the estimated $125 million family film. Not exactly a vote of confidence.

And yet a scrappy underdog status might actually benefit this vintage vehicle about small-town truck-obsessed high-school senior Tripp (Lucas Till, Havok in the “X-Men” series whose mechanical ingenuity shown in the recent “MacGyver” TV reboot comes in handy here), class brain Meredith (Jane Levy of “Don’t Breathe” and sitcom “Suburgatory”) who harbors a crush on him and an oil-guzzling, octopus-like creature that acts like a super-charged engine under the hood of his pickup built from spare parts. “Monster Trucks” (yes, a pun) never approaches the soaring moon-glow heights of "E.T."’s Elliott and his adorable alien buddy. And, based on the early word, I came into it with fairly low-octane expectations. But at least it never made me want to sink ever deeper in my seat with despair at every plot turn as some flat-out lemons do.

The main problem of “Monster Trucks” is how content it is to take its sweet time before shifting into high-action gear, including some not-bad vehicle stunts that feature the sight of a 4X4 somehow clamoring up the side of a building and speeding across rooftops, as it engages in pokey exposition and introduces numerous characters. We meet the shady oil company boss (a duly slick Rob Lowe) who badgers a corporate scientist (Thomas Lennon, amusingly underplaying his part) into giving his approval to drilling in a lake, even though there are signs that a thriving ecosystem exists down there that might get harmed. As a result, a fiery explosion releases a squishy aquatic beast with long tentacles, shark-like teeth and a Flipper-like smile that finds its way to the local junkyard run by a kindly Danny Glover that serves as Tripp’s refuge.

While Tripp gets to know Creech, the name he gives to his new pet, we learn this teen outsider has a rocky domestic situation. His mom (a blink-and-she’s-gone Amy Ryan) has been hanging with the local sheriff (Barry Pepper, who does what he can as a neat-freak law enforcer) ever since her sad-sack hubby (Frank Whaley) left her and their son behind. But Creech doesn’t just allow him to go on joy rides. It turns this rebel into an eco-warrior as he and biology-loving Meredith try to save their multi-legged pal while the bad guys see Creech as evidence of their wrong-doing that needs to exterminated.

“Monster Trucks” isn’t built to be a cool deconstruction of Reagan-era entertainment like the Netflix hit “Stranger Things.” Its high points instead rely on modest retro charms, such as the cameo appearance of a Simon computer game (which actually gets more screen time than Amy Ryan) or the use of bombastic music themes to heighten tension and the occasional golden oldie such as Heart's “Barracuda.” When "Monster Trucks" finally unleashes its crash-bang-boom chase of a grand finale that somehow seems both overly violent and yet benign, it’s a relief that it isn’t silly or stupid. As for the good-looking Till, he fulfills his function as a throwback to a Kevin Bacon-Patrick Swayze hero type. Wedge is also fond of sight gags, such as the microwave door that pops open at an inopportune time.

Some parents might actually be pleased that the film promotes scientific thinking and environment-protecting regulations, even if Tripp commits vehicular mayhem, endangers the lives of others and skips school with no repercussions. But I doubt anyone will jump at the chance to claim an old Blu-ray of “Monster Trucks” decades from now—or be inspired to do a big-screen homage. 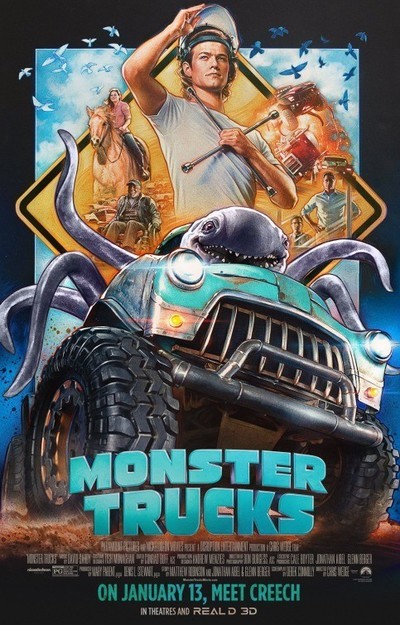 Lucas Till as Tripp