The story goes that Paul W.S. Anderson has been trying to make a film version of the video game series “Monster Hunter” since 2012, but one would never guess this after seeing the end result. Say what you will about the often critically derided films in the “Resident Evil” series, there’s at least a sense of style behind them that’s entirely missing for the first hour of “Monster Hunter.” That hour is bafflingly incompetent, failing to give viewers even the basic action they presume comes with a purchase or rental of something called “Monster Hunter.” At around the 70-minute mark, the Anderson who knows how to use excess for entertainment wakes up, but it will be too late for most people, who will either be asleep or figuring out if there’s a way to get a refund on their VOD rental. And then Anderson sabotages any goodwill he could have left with his viewers by dropping a non-ending designed purely to tease a sequel that seems unlikely to ever be. When it was announced, the hope was this could launch another series like “Resident Evil.” Sadly, this is going to be closer to “Soldier” on Anderson's resume. Maybe they could get the gang together for more zombie dogs?

“Monster Hunter” opens in a vast desert in country with a group of U.S. Army Rangers on patrol, led by Captain Natalie Artemis (Milla Jovovich). What looks like a combination sandstorm/thunderstorm rises on the horizon, and Natalie and her team are suddenly thrust into an alternate universe alongside ours that is basically more desert, but with giant, terrifying creatures. Instead of world-building, which has defeated some of his most enjoyable escapism, Anderson goes for a vast desert wasteland aesthetic, and it’s a fatal flaw. You can’t make a movie called “Monster Hunter” that’s boring to look at it, and this is one of Anderson's flattest films in every way.

After Anderson dispatches with most of Natalie’s crew, he unites his heroine with someone from this world called “The Hunter,” played by Tony Jaa. If you’re thinking, “Oh, cool, a Jovovich vs. Jaa fight has some potential,” I was on the same page, but Anderson can’t even pull that off. Working with editor Doobie White, he cuts every sequence in “Monster Hunter” into a hyperactive cinematic gruel so everything just looks and feels the same, at least for the first hour. Even when Jaa gets to show off some of his notable skills … we barely get to see them because of the choppy filmmaking.

What about the monsters? Shouldn’t a movie called “Monster Hunter” that’s co-produced by Toho scratch that itch for fans of “Godzilla” movies? Again, that mark is missed. The creature design isn’t even as elaborate or detailed as the games, feeling like the bare minimum required to satisfy a memo to an effects studio that says “make a big monster.” Some of the creature design in the “RE” movies can be grotesquely creative, but the decisions here in terms of monsters feel safe and boring.

And then something very bizarre happens. About two-thirds of the way into “Monster Hunter” it’s almost like Anderson and Jovovich get so bored that they just decide to start the wackier sequel earlier. Spotted briefly in the prologue, a scenery-chewing Ron Perlman drops into the action accompanied by a team of hunters that includes a giant cat who acts like a human. And in this moment you realize that all of “Monster Hunter” needed to be this weird. It’s not a great film at any point, but there’s style and creativity in the last act that’s a stark contrast to the dull noise that came before. If you’re gonna transport a star like Milla Jovovich to a land of monsters, why strand her in the desert for an hour and then basically become a different, more stylish movie in the final act? By the time Anderson figures out the right tone for this project, you’ll be hunting for a better movie. 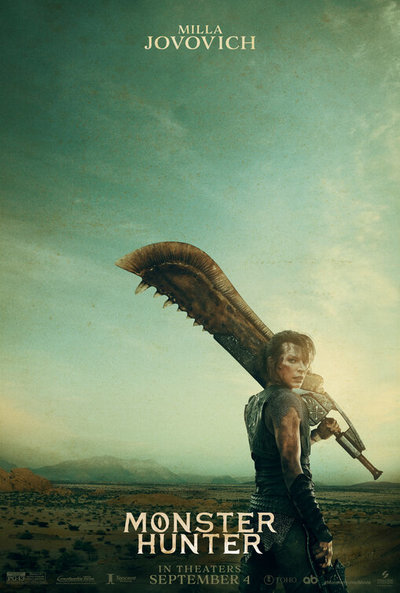 Rated PG-13 for sequences of creature action and violence throughout.

Tony Jaa as The Hunter