The entirety of Netflix's “Miss Americana” yearns to continue the feeling of how we first see mega pop star Taylor Swift—sitting cross-legged in overalls, reading from her teenage journal, and talking about different realizations she’s had about the kind of woman she wants to be. It's far removed from her sold-out shows, but only by so much. Lana Wilson's doc is engineered to appease her fans and promote Swift's self-awareness, and yet it leaves one feeling that there is still so much more to be discussed about what makes Taylor Swift who she is.

Swift has reinvented herself many times over, and “Miss Americana” finds her before the birth of her 2019 album Lover, and after 2017’s Reputation didn’t hit as well as her previous. (There’s brief footage of her reacting to not getting any Grammy nominations for Reputation, and it’s a striking moment.) This is also around the time of when Swift became more politically involved, and against conservatives like anti-feminist Tennessee senator Marsha Blackburn and Donald Trump. The movie seeks to detail what lead to that transformation, but also makes sure to pat her on the back for getting active.

Wilson’s mostly chronological depiction of Swift’s rise goes to different chapters that even casual pop culture viewers will recognize, while offering the emotional subtext fans might not know about Swift’s many personal and public experiences. For example, Swift looks back on the incident at the 2009 MTV Video Music Awards, when Kanye West stormed the stage after she had won the award for “Best Female Video,” and declared that “Beyonce had one of the best videos of all time.” She talks about how the boos that followed West’s actions felt like they were for her, and how that shook her, especially in her long-held values to be nice and to be liked.

Wilson frames Swift’s chronological rise in pop music largely as the very public story of someone who worked hard to fit into ideals for women—which created a body image insecurity that led to an eating disorder—and now seeks to not let such forces control her. The doc also touches upon the slut-shaming she has faced for her public relationships, and the damning accusation of being branded as "fake." In between all of the behind-the-scenes footage that millions of Swift fans will no doubt enjoy is a narrative of someone navigating her career in a ruthless business that, according to Swift, “puts women in an elephant graveyard when they’re 35.” She’s also, as the doc reminds us in a powerful passage, someone who did experience sexual assault, and was close to having her story silenced. Only Swift speaks about these concepts, and it’s like watching a woman trace her awareness. It becomes a bummer that this compelling approach has to fight so much against briefly amusing fan service for screen-time.

Fan service is not an inherently bad thing, especially when a star is as charismatic as Swift. She can show a witty, loose side in candid footage, whether taken in-studio or at home. But the movie limits itself to such a narrow focus in how it challenges this pop culture titan, or her actions, and constantly touts her as the hero. In the movie’s clear intent to uphold and protect her, it only makes Swift seem even more out of reach.

It’s easier to connect to Swift, and her life story, when she speaks transparently about a deep need for approval, and wanting to be what she calls “a good girl.” In turn, whenever Wilson can use that relatable quality, and then make us contextualize Swift’s arena concert footage as an isolated art spurned from an insecurity of not being enough, the documentary goes beyond well-intentioned hagiography. But too much of “Miss Americana” plays like we should crane our necks back and look up to one of the most popular people on the planet, and just appreciate them for reminding us that they too are human. 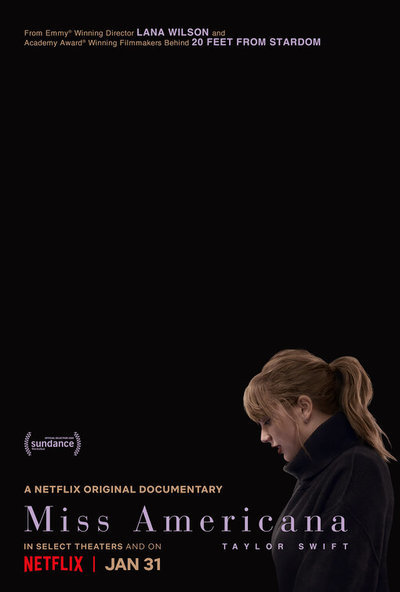 Taylor Swift as Herself