Lee Isaac Chung’s “Minari” casts a spell from its opening moments, a Terrence Malick-like evocation of human beings trying to stay in harmony with the natural world. As a family car travels through a green American landscape, the earth itself seems to be speaking to the characters, and through them, to us.

It is a classic immigrant story with specific, often unique new details. A Korean American family headed by a father, Jacob (Steven Yeun) and mother Monica (Yeri Han), came from Korea in the 1980s and spent time in California working as chicken sexers, separating baby chicks by gender. Now they have moved with their two American-born children, a serious and mature girl named Anne (Noel Kate Cho) and a six-year-old named David (newcomer Alan S. Kim), hoping to start a 50-acre farm in a small Arkansas town.

Culture clash is the unifying subject here, though not the only one. Chung, who waited to make this autobiographical drama until he had several acclaimed films under his belt, knows exactly the story that he wants to tell and how he wants to tell it. Monica and Jacob fight over their shared goals as a couple and their ambitions for their children. The tension of assimilation versus independence underscores every exchange, whether it’s intimate and private or connected to the larger community that they are tentatively getting to know.

It’s clear that Jacob has bought into some version of "the American dream" and carries himself like a prototypical mid-20th-century white American farmer, complete with gimme cap, terse speech, breast pocket cigarette pack, and ambling gunfighter walk. Monica seems more torn, and it is obvious from seeing the two of them interact that she comes from a higher social class and is more comfortable in the cities. As the story goes on, we begin to wonder if she regrets having moved to America in the first place. Even though she’s game, it’s a tough road that never seems to get easier.

Ordinary rituals become fresh and alive when a different frame is put around them, and this is the case in Chung’s film. The couple talks about whether to get a small farm in a community with a larger Korean American population or stick where they are and tough it out in relative isolation, a conversation many couples might have in a similar situation, here it is with all sorts of secondary challenges. What church do we go to? Should we go to church at all? How forward should we be in trying to make new friends with people who do not share our cultural heritage? These are problems that individuals raised in a monoculture don’t think about often, or at all.

The movie loses tension at certain points, relying a bit too strongly on atmospheric nature shots and a haunting score that seems to be performed on a slightly out-of-tune upright piano, and sometimes punting conflicts down the timeline when the viewer may want a bit more examination of them at that moment. But Chung’s grip as a storyteller remains sure. There is a ring of truth to every moment and conversation. The best of these are imbued with a complexity and contradiction that suggests that there’s more to human interactions than whatever advice we were given as kids. A moment after church when young David is casually racially insulted by a young white boy who then immediately speaks to him as a friend, and invites him over to a sleepover, will ring true to anyone who has been on the receiving end of that type of behavior. Everyone in this movie is still learning the right way to behave, including the adults.

The supporting characters are vividly drawn. The great American character actor Will Patton is superb as an evangelical Christian farmer who praises Jesus every minute and is glimpsed in one scene carrying a big wooden cross on his back as he walks along the country road. (Jacob asks if he wants a ride and he says no, he’s got this.) But the best performance belongs to Yuh-Jung Youn as Soonja, Jacob’s grandmother, who is brought in from the old country to provide advice and childcare help. She is a live wire—a cosmopolitan who always speaks her mind and is at ease with profanity, practical joking, and making moral/ethical decisions that could have major repercussions without consulting Jacob or Monica. (When Monica puts a $100 bill in the church collection plate, presumably to make a big impression during their first visit, grandma deftly removes it.)

Chung has a knack for capturing those moments when people behave according to their own internal compass, in ways that may not make sense to an outside observer. And it’s impossible not to appreciate the deep understanding of human behavior, as well as the way that ordinary objects and situations acquire symbolic meaning when we think about them in relation to the characters. This is a lovely, unique film.

Opening today, December 11th, for a limited release qualifying run before a wider release in 2021. 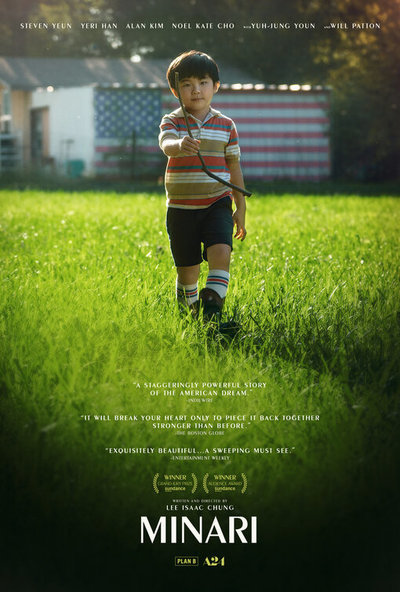 Will Patton as Paul