Roland Emmerich’s “Midway” is not the first movie to cover the battle widely considered as the turning point in World War II’s Pacific Theater. Back in 1976, Charlton Heston and Henry Fonda headlined a prior film of the same name, this one presented by Universal Pictures in their patented sound system, Sensurround. For the young folks in the audience, Sensurround was like 3-D for your ears. Speakers were placed under the seats at selected movie theaters, originally to give the impression that viewers were experiencing the earthquake scenes in 1974’s disaster epic “Earthquake”. Heston’s “Midway” was the second feature to utilize this gimmick as an immersive audience experience, but as theatergoers and theater owners soon realized, the experience was a little too immersive. The rumbling sound caused plaster to fall from the ceiling and bolts to come out of the seats. Sensurround also had the unexpected though welcome effect of feeling really, really good on your NC-17-rated body parts.

Compared to the recent addition of 4DX theaters that shake your seat to the point of nausea, Sensurround sounds rather quaint. But I bring it up because the sound mix is the only part of the new “Midway” worth championing. It made me nostalgic for Universal’s speakers under my seat. Several times, I felt the sonic effects of plane engines, explosions and aircraft carriers pulsing through my torso, rattling me with a giddy sense of aural joy. Director Emmerich is no stranger to the types of movies that require perfect storms of loud noises—he made “Independence Day” and “2012”—nor is he a stranger to excessive use of CGI. The overabundance of CGI is one of the bigger problems with “Midway” because, far too often, it feels like you’re watching a video game or an F/X highlight reel. By virtue of the PG-13 rating, the carnage is largely bloodless, adding to the uneasy sense of fakery. Outside of an effective sequence involving a charred body, this is a virtually gore-free war movie. This is safe enough for a middle school history class screening.

The film’s toned down violence would be easier to ignore if its characters were compelling. The real-life players are embodied by a group of up-and-coming actors and a few veterans. For the latter team, we have Dennis Quaid, Aaron Eckhart and a startlingly white-haired Woody Harrelson. The gung-ho young pilots and servicemen are embodied by Ed Skrein, Darren Criss, and Nick Jonas. Everyone stalks around like a cliché from a 1940s studio system war movie minus the charisma and presence of the actors who originally held those roles. We never get close enough to any of them to feel genuine emotion. Perhaps “Midway” is going for the kind of enforced distance Christopher Nolan brought to the far better “Dunkirk,” but Nolan is a master of cinematic coldness. Emmerich is too sentimental to reach for that goal.

However, Emmerich definitely goes gunning for his contemporary, Michael Bay, by recreating the attack on Pearl Harbor. The staging is full of extremely large explosions, planes disintegrating in large chunks and last-minute escapes and demises. As an effects-laden spectacle, it’s a rather effective set piece. But Bay was smart enough to include a scene showing the heroics of African-American messman Dorie Miller and, before Disney scrubbed the film, was unafraid to bloody up the proceedings. As with the violence, Emmerich sidesteps the discomfort of representing the segregation of Black soldiers who fought at Midway by eliminating them altogether. The director does to WWII what he did to Stonewall.

“Midway” splits its scenes between the Americans and the Japanese, taking a cue from Richard Fleischer’s “Tora Tora Tora”. The Japanese are as clichéd as the Americans; they’re stoic and ramble off comments about honor while making thinly veiled threats. There’s even the famous line that also appeared in the 1976 “Midway” about “awakening a sleeping giant.” I know this line reportedly was spoken in real life, but it’s presented in a very hokey fashion here. The Chinese are also represented in a subplot featuring James Doolittle (Aaron Eckhart) that feels imported from a different movie. Considering that several logos for Chinese companies appear during the opening credits, these scenes must have been a prerequisite.

As daredevil pilot Dick Best, Skrein has the lead role. You can predict like clockwork that his wicked, untamable ways will be tempered with a newfound sense of maturity before fade out. Skrein is at least somewhat humanized by his wife Annie (a wasted though watchable Mandy Moore) and a rising sense of guilt over losing a fellow pilot he took under his wing. His co-stars aren’t so lucky. As Ed Layton, the military strategist that no one listened to when he correctly predicted Pearl Harbor would be a target, Patrick Wilson is reduced to a poorly written oracle role. Quaid’s Admiral Halsey, subject of that obnoxious Paul McCartney and Wings song, spends his screentime growling about not giving up before being overtaken by shingles. And the most memorable thing about Harrelson’s Admiral Nimitz is his hair, which draws your attention every time he’s onscreen. Wasting a gruff Quaid is as sinful as wasting a smartass, worrywart Harrelson.

I admire screenwriter Wes Tooke’s attempt to stick to scenes of military strategy and process, as well as Emmerich’s glee in wanting to show us what his F/X team can do. But the combined effect of a dull script and repetitive battle sequences lulled me into a state of boredom, so much so that at times I had my eyes open yet my consciousness had drifted elsewhere. I wasn’t asleep; I was just missing. You know what would have guaranteed my undying attention? A better movie. Or Sensurround. 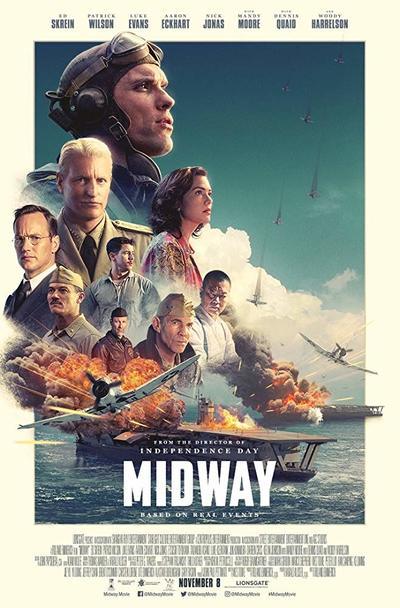 Rated PG-13 for sequences of war violence and related images, language and smoking.