The first 40+ minutes of the heavy-metal-themed, coming-of-age comedy “Metal Lords” are pretty generic. These early scenes do a fine enough job representing the movie that follows. They also don’t have the charm—or the patience and emotional generosity—that defines the rest of the movie. But the script by D.B. Weiss, co-creator of HBO’s “Game of Thrones,” does take a moment to establish some canned fraternal tension between Kevin and Hunter (Jaeden Martell and Adrian Greensmith), two high school buddies who struggle to form a bitchin’ metal band in time for their high school’s Battle of the Bands competition.

Thankfully, during the movie’s back half, director Peter Sollett (“Raising Victor Vargas,” “Nick & Norah’s Infinite Playlist”) often slows down long enough to sell this very Gen X fantasy about the enduring appeal (and character-developing side benefits) of being a teenage metalhead.

In “Metal Lords,” Kevin and Hunter’s friendship is tested by Emily (Isis Hainsworth), a Scottish-American cellist that Kevin likes, but Hunter does not, because, ew, girls. This sort of feel-good/formulaic progress narrative already seemed quaint by the time that “Wayne’s World” director Penelope Spheeris revived the He-Man Woman Hater’s Club for her Amblin-produced “Little Rascals” revival. Still, Hunter does inadvertently school autodidact Kevin on the true meaning of metal.

“Metal Lords” eventually focuses on all three lead protagonists instead of their limited roles in pushing the plot towards its foregone conclusion. The film may be cinematic comfort food, but its creators do earn our trust and nail all the essential beats they need to along the way.

That said: Hunter’s loud personality dominates the movie’s uninspired first half. He eventually becomes more interesting as a foil for other characters, but Hunter initially (and repeatedly) steamrolls over Kevin, his best friend, to overcompensate for his own (relatively mild) daddy issues. Because while Hunter gets almost everything he wants in life, he just can’t relate to Dr. Sylvester (Brett Gelman), his bougie divorcee father. Thankfully, Hunter’s relationship with Dr. Sylvester develops a lived-in tenderness that makes even their most shrill disagreements seem convincing.

For a while, Hunter is defined by the proliferation of band posters that line his basement walls, including formative metal bands like Judas Priest and Anthrax, and newer acts like Amon Amarth and Opeth. It soon becomes clear that Hunter has an outdated view of what’s cool about metal. Fortunately, he’s neither shamed nor indulged as a result of his callow behavior. And Emily and Kevin’s awkward courtship does eventually become a major part of the movie’s story and not just a plot device.

A definitive turning point comes about 43 minutes into “Metal Lords,” after Emily and Kevin have sex in the back of her family’s van. Kevin joins her in her bedroom where Emily gets to take the lead a little: they have a staring contest and, at her suggestion, he lies down on top of her. Emily’s still essentially a stock character, but the sincere and convincing expression of her puppy love crush on Kevin proves that the movie’s creators know when to slow down long enough to ease into some familiar plot contrivances. Even Dr. Sylvester and Hunter’s dysfunctional relationship develops nicely thanks to the movie’s strong ensemble cast and the comic timing in a few key scenes that are affectionate, funny, and well-paced enough to sell the movie’s otherwise canned drama. In this way, Sollett and Weiss do a fair job of representing teenagers as we (or really, some of us) would like to imagine them instead of how they actually are.

You might be wondering what any of this has to do with heavy metal music. “Metal Lords” is thankfully not so much about the true meaning of metal, as Linus might say, but rather how to enjoy being in a band since liking your bandmates tends to inspire good performances (among other things). The climactic Battle of the Bands scene is satisfying despite everything because the kids not only really can play their instruments: the song that they perform is a genuinely catchy and unabashedly juvenile metal anthem, with lyrics by Weiss and music by executive music producer Tom Morello. This song is appropriately named “Machinery of Torment.”

Morello also has a cameo later on in the movie, playing one of the celebrity angels and demons perched on Kevin’s weak shoulders. It’s a good bit and not because of any individual cameo appearance, but rather how long the scene goes on and how funny it is to see a bunch of rock gods reimagined as role models. That’s hardly an original conceit, but it’s expressed well enough here, so yeah, sure, why not? 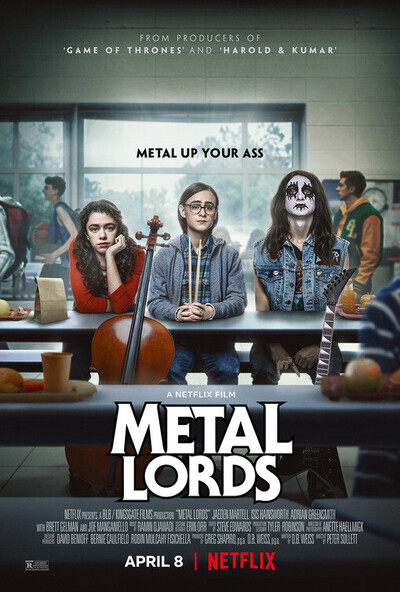 Rated R for language throughout, sexual references, nudity, and drug/alcohol use - all involving teens.