Memory: The Origins of Alien

"Memory: The Origins of Alien" is one of the best documentaries about a single film that I've seen. It is reductive to call it a "making-of" documentary, because the phrase conjures images of the weakest of those supplements that used to appear on DVDs—the ones where filmmakers and actors sat in chairs in front of a poster for the movie, calling each other geniuses. In contrast, while this movie by Alexandre O. Philippe does go in-depth about how Ridley Scott made the original 1979 sci-fi/horror classic, this is not a collection of fawning, repetitious war stories. It has a complex and rigorously argued set of theses that all come together at the end. And it weaves every detail—whether provided by an on-camera witness, a document, a drawing, a painting or a photograph—around that set of intertwined arguments, which are too complex to explain in this review, but come across powerfully by the time the credits roll.

It's not a making-of documentary, it's a thinking-of documentary. Like a mesmerizing presentation by a teacher who knows their stuff, watching "Memory" is nearly as intellectually stimulating as re-watching the work that inspired it, because you get to see arguments being introduced, fortified with evidence, then set up to segue into other, separate-but-related arguments, so seamlessly that the transition seems invisible and inevitable.

It's all heading toward an extended consideration of that still-shocking dinner table scene, when the baby xenomorph bursts out of John Hurt's infected crewmember Kane. Both the story of "Alien" and the documentary about "Alien" observe a monstrous seed that was implanted inside of someone and gestated until it was ready to come out. The monstrous seed of “Memory” is the movie itself, or aspects of the movie. It has many mothers and fathers, all of whom help nurture it.

Phillippe is one of the great practitioners of what might be called the feature-length video essay, a format that uses new and old interview footage (including bits that appeared on home video editions of "Alien") as scaffolding to support a series of arguments about what a film is doing and how it's doing it. This is not a "how did they make it" film. It's about why they made it the way they did. It's surely no coincidence that his last film, "78/52: Hitchcock's Shower Scene," focuses on the last groundbreaking movie shock prior to the "Alien" chest-burster. Both films are about medium-altering moments of horrendous violence that have implications beyond "isn't this scary/gross." Both place their scenes in context, not just within a particular film and its genre, but within decades of national and international history, and millennia of thought.

To that end, the film gathers marvelous, you-are-there details, such as costar Veronica Cartwright recalling the awful smell that greeted the actors when they arrived on the set on that day, due to the fact that Hurt's prosthetic chest cavity had been stuffed with offal that had putrefied beneath the lights. And there are countless, character-revealing throw-aways—such as the tidbits that co-writer Dan O'Bannon, was inspired to invent the story of "Alien" because he was obsessed with insects on the farm where he grew up as a poor boy in Missouri while suffering from Crohn's disease, a chronic gastrointestinal disorder that finally killed him. (O'Bannon's wife Anne is movie's single best source, practically our sherpa through the decades.)

Material such as this is rich enough to form the center of a satisfying documentary on its own. But Phillippe goes further, encouraging participants in the production as well as present-day buffs, scholars, and mythology aficionados (including actor Tom Skerritt, genre film master Roger Corman, film journalist Axelle Caroline, genre movie expert Clarke Wolfe, and TCM host Ben Mankiewicz) to go beyond "Alien" and the works it inspired, and think about where all the influences and allusions came from—not just in terms of film history, or even art history or literature, but humanity itself: our needs and fears, dreams and nightmares.

At various points, the story, direction, and production design of "Alien" are convincingly tied to mythology, religion, dream analysis, then-current developments in politics, the long history of colonialism (which links "Alien" to another 1979 blockbuster, "Apocalypse Now," both of which acknowledge the fiction of Joseph Conrad) and Egyptian art and architecture. H.R. Giger, who designed the creatures and planet where the Nostromo crew discovers them, was hugely inspired by the latter; so were Alexandre Jodorowsky, whose aborted 1970s adaptation of "Dune" brought together O'Bannon and Giger. Right up until production started, the astronauts were supposed to find the egg chamber in an ancient city oriented around a set of pyramids—a notion that would find its way into Scott's "Alien: Covenant" decades later. (The city was replaced with a spaceship in the 1979 film for budgetary reasons. But decades later, the so-called "space jockey" would become the Engineers in "Prometheus"—a film which, like "Covenant," doubles as Ridley Scott's consideration of his role as a kind of Dr. Frankenstein in two genres, horror and science fiction.)

Philippe's direction, far more imaginative than the norm in a movie about moviemaking, is very much in the spirit of Scott's original vision for "Alien." Every detail of cinematography and design dovetails with the images and stories being presented, from the chiaroscuro lighting and black backgrounds that make the witnesses' recollections seem to be occurring in dream space, to the way Philippe plays previously-seen snippets of interview footage on squarish monitors embedded in control panels that look like items on the bridge of the Nostromo.

Every detail, whether journalistic or aesthetic, is building towards an extended consideration of the "birth" scene at the dinner table. When it arrives, Philippe finds a way to draw everything together into a unified statement that is dazzling its clarity as well as its cleverness. This is a movie about impregnation, gestation, birth, and transformation. That's why it doesn't go through the plot of "Alien" chronologically, but instead weaves its strands around the idea of ancient, terrifying forces gathering power over many centuries, concentrating themselves in the minds of all of the people who worked on this movie, then exploding into the world.

As of October 31st, 2019, "Memory: The Origins of Alien" is available on many VOD platforms, including iTunes, Amazon Prime Video, Google Play, VUDU, and more. 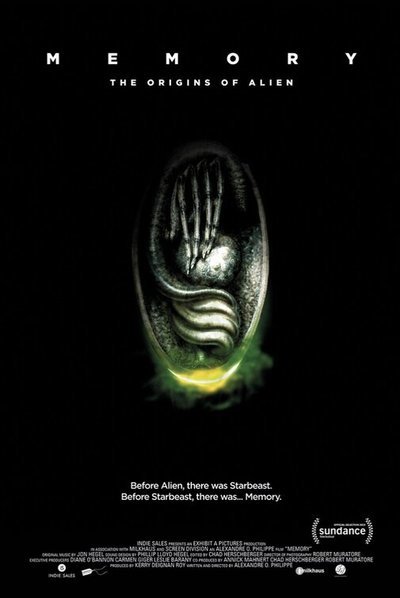 Ronald Shusett as Himself

Roger Christian as Himself

Ivor Powell as Himself

Terry Rawlings as Himself

Tom Skerritt as Himself

Veronica Cartwright as Herself

Roger Corman as Himself

Gary Sherman as Himself

Clarke Wolfe as Herself

Diane O'Bannon as Herself

Adam Egypt Mortimer as Himself

Ben Mankiewicz as Himself

William Linn as Himself

Henry Jenkins as Himself

Axelle Carolyn as Herself

Tim Boxell as Himself

Bijan Aalam as Himself