Now that Nicolas Cage has had his stock upgraded as of late (thanks to his lovely performance in “Pig” and his self-aware turn in the recent “The Unbearable Weight of Massive Talent”), and Bruce Willis has retired, I suspect that Liam Neeson is going to be the next actor who finds himself in the critical crosshairs for doing far too many forgettable movies. His latest, “Memory,” is already his second such film in 2022, and since his list of upcoming projects on IMDb mentions titles like “Retribution,” “In the Land of Saints and Sinners,” “The Revenger” and “Cold Pursuit Sequel Project,” it doesn’t appear that he will be disembarking this particular gravy train anytime soon. To his credit, “Memory” is at least slightly more ambitious than most of the similar films Neeson has done recently. But it's certainly not enough to make you overlook how one of our most powerful actors is again wasting his time on the kind of half-baked thriller Charles Bronson used to crank out with depressing regularity during the waning days of his career.

The time around, Neeson plays Alex Lewis, another expert hired killer with a particular set of skills. As this film opens, he's considering leaving the life behind after seeing signs of the Alzheimer’s that has already claimed his brother. Nevertheless, Alex accepts one final job in El Paso, in which he has to bump off two separate people and recover some important flash drives from the first victim. He pulls off the first hit easily enough but when he discovers that the second victim is a 12-year-old girl (Mia Sanchez), Alex refuses to pull the trigger and keeps the flash drives for himself as an insurance policy.

Unfortunately, the girl had been pimped out by her father to a number of wealthy and powerful people, including the depraved son of powerful real estate developer Davana Sealman (Monica Bellucci), who put out the original hit in order to help her child evade justice. After tying up that loose end, she also calls for Alex to be killed. But even though he's slipping mentally, he's still skillful enough to evade her hired goons and kill everyone remotely connected to the crime. Alex also plants enough clues for an FBI task force led by Vincent Serra (Guy Pearce), who also tried to help the girl and feels guilty about what happened to her, to pursue him while always remaining one step ahead of them.

If the basic story points of “Memory” sound familiar to you, it may be that you've seen “The Memory of a Killer,” the 2003 Belgian crime drama that has been Americanized here (with both films based on Jef Geeraerts’ novel The Alzheimer Case). Although this version more or less follows the same narrative path of its predecessor, the original film, although a perfectly good genre film in its own right, was more interested in its central character (played in a very good performance by Jan Decleir) as he is forced to reckon with both the weight of his past misdeeds and the cruelties of his present condition.

“Memory” does begin to work when Neeson gets a hold of script's more dramatically impactful moments, but these scenes are simply too few and far between to be truly effective. Dario Scardapane’s screenplay tends to put more of an emphasis on the big action beats, which are implausible enough as is and doubly so when you consider that they involve a character with deteriorating cognitive abilities. Although these scenes are handled with some style by director Martin Campbell, whose oeuvre includes one of the very best James Bond films (“Casino Royale”) and a lot of stuff that will be politely overlooked here, they wind up overwhelming the human drama involving Neeson’s character. This is especially evident during a new, less thoughtful finale in which one of the key villains is dispatched in an especially gruesome manner in order to give the gorehounds in the audience a final thrill before the end credits. Other than Neeson, the only performance of note here comes from Bellucci, whose casting here is unexpected, to say the least.

“Memory” is a little better than the majority of Neeson’s recent action excursions and there's a chance it may prove to be better than most of his future projects. However, that doesn't prove to be enough to make it worth watching, and those lucky enough to have seen “The Memory of a Killer” are likely to be disappointed as well. Yes, a little more effort has gone into the making of "Memory," so it's a shame—and an ironic one to boot—that the end results are so forgettable. 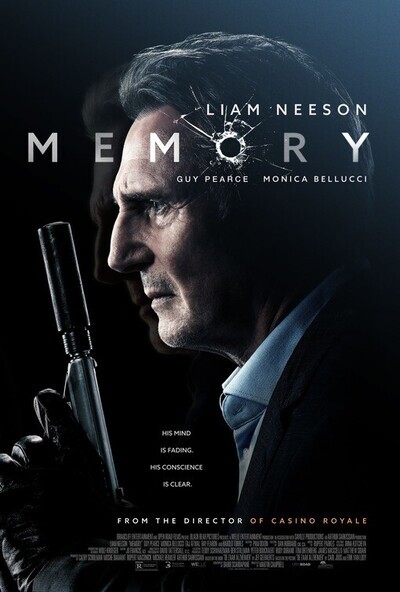 Rated R for violence, some bloody images and language throughout.