The setting for rural thriller “Mean Dreams” is a quiet slice of America, where a young woman named Casey (Sophie Nelisse) says with all earnestness, “It’s always been my dream to see the ocean one day.” She’s just moved to a small town with her single dad Wayne (Bill Paxton), a police officer who loves his daughter but hides something nefarious underneath his big smile, as markings on her body directly indicate. Casey is saved when she meets a good ol’ boy named Jonas (Josh Wiggins), who lives in a farm nearby. The two bond quickly. He finds a respite from tedious farm work assigned by his overalls-wearing Pa; she finds an escape from the abusiveness of her possessive father.

After Jonas witnesses Wayne’s abuse first-hand, there’s a brief showdown between the two men, with Wayne threatening to kill Wiggins’ character or use his power to ruin his family’s life. To make Wayne even more despicable, Jonas witnesses the unruly patriarch run away from a suspicious money exchange where everyone else is killed, sending Jonas on the run with Casey after Wayne realizes there was a witness.

"Mean Dreams” is motivated by themes as common as they are simple: the innocence of youth, the power of love, yadda yadda yadda. As Casey and Jonas flee toward the ocean that she's dreamed about, an anxious set of stakes does not come with them—it’s the kind of movie in which 15 minutes in you know exactly what you’re going to get for the next 90.

The script, written by first-timers Kevin Coughlin and Ryan Grassby, puts its weight on affable young performers who are inexperienced, which makes for numerous emotional scenes that alternate between being under- or overplayed. Everyone seems like a construct from a script that’s more than just a little deaf to teen speak. “I think God’s also a lie,” says Casey when just hanging out with Jonas. “Just something made up to keep us from being bad, like Santa Claus … or grown ups.” It’s like the story wants to be of an old soul when it’s just naively idealistic, especially when these humdingers are delivered with a straight face.

As for Paxton, he enters the story with an edge, establishing the authority and revealing sensitivity of a single father with a powerful job. It’s not a career-topping role by any means but it is a reminder of how the late actor could take on a role with sincerity and breathe some type of life into it. Even the goofy dialogue makes the most sense coming out of his mouth, like when he reckons out loud, “It’s a mean world and the angels left us to fend for ourselves.”

With a movie like “Mean Dreams,” there’s a clear line between who in the film crew was inspired to tell this story and who wasn’t. The latter category would be the two screenwriters, who present this tale of young adults—on the run with a giant bag of money and a gun—with every beat you’d expect and nary a surprise. But inspiration regularly bubbles up in the visuals, which sees cinematographer Steve Cosen composing numerous shots of sharp, striking lighting and natural full frames for images that are familiar on paper. Hell, even the location manager might have put in more work than the writers, given the numerous cinematic settings (a long drive, a remote landfill, a massive barn) that provide “Mean Dreams” its crucial visual context.

There’s a tentative innocence underneath the familiarity of “Mean Dreams,” as if it’s been made for people who haven’t seen this story a thousand times before—young adults like Casey or Jonas. Even with that in mind, “Mean Dreams” does stubbornly little. It ultimately becomes one of those sparse projects where you wonder what excited the filmmakers through each stage of the production process, and why the answer to that question isn't more obvious. 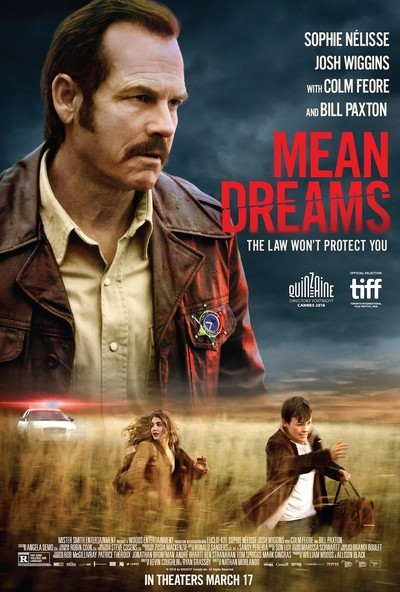 Colm Feore as The Chief