Written and directed by Robin Lutz, this is a rare feature that takes the trouble not just to understand its subject and communicate his significance, but find ways to show us, visually, how his style evolved, and the principles behind that evolution.

The tale begins with the standard-issue "This is a movie about a great artist, here are a few summary details abut his life and art," with some landscape and architecture shots and images of Escher's work. Then it becomes increasingly daring and fanciful, yet always remaining in service to the M.C. Escher, the Dutch draftsman and printmaker whose art became internationally famous during the post-World War II era.

Escher was a rare artist who managed to combine his influences into something genuinely new. His work is a geometric/mathematical surrealist vision of the objectively perceivable world, but also a subjective interior, evoking ancient Arabic-North African graphics; the Salvador Dali-Pablo Picasso-Georges Braque anti-realist sensibilities of the '20s and '30s, and computer models that would not become popular until decades after Escher’s own experiments.

Lutz and his collaborators, including a team of graphic designers and animators, make Escher's art come to life in surprising and amusing ways, from having one of his trademark salamanders appear in an otherwise "realistic" frame and travel across increasingly "unreal" panoramas until we're in an Escher print, to re-imagining intricately patterned Escher artworks so that we seem to glide along them, or into them/through them. This happens slowly enough so that we can appreciate how deftly the artist translated negative space into positive space, in ways that made the distinction seem arbitrary: for instance, the black spaces between joined silhouettes of lizards or amphibians might become black birds with white spaces between them, then go back again. Or people and animals might move along one stretch of diagonal stairs and jump to another, seeming to go upside down or sideways, in defiance of gravity, emphasizing the brain-teasing techniques Escher perfected.

Lutz and his team have found a cinematic analogy for the movement of the eye over static pictorial art reproduced in a book or hanging on a museum wall. The movie is especially good at evoking that "wow" moment when you realize that a thing you were looking at has turned into another thing. It's explaining the magic trick without ruining the magic, a magic trick of a different sort.

This approach is so dazzling that one wishes the filmmakers had pushed it a bit further, deploying it even more often, or in more and subtler variations—perhaps figuring out a way to have the film itself flip back on itself structurally at key points, or end precisely where it started, so that the project itself seemed to have no beginning or end. (There's a hint of this, but not much more.)

Musician Graham Nash, a devotee of Escher who contacted him late in his life, says Escher dismissed the idea that he was an artist. Throughout the movie, we hear Escher align himself with scientists and mathematicians, often trashing his own skills as a representational draftsman and speaking of his heroes and colleagues with awe.

This isn't to say that Escher was down on himself at all times, or that that he entirely rejected the notion he was making art. Escher's letters, performed in voice-over by actor Stephen Fry, make it clear that he challenged himself to improve his abilities and expand his vision and grew irritable when stuck in a groove. And yet there was always a sense—particularly once Escher hit his forties and realized he was indeed a global phenomenon—that a "real" artist wouldn't be as entertaining. This is the world's misconception, not Escher's, but it's still a shame that he let himself feel diminished by it. There's power and profundity in Escher's art, yet the puzzle-box aspect is what pulls you into it.

The movie makes a case that we should talk about Escher the way we talk about one of his inspirations, Johann Sebastian Bach, who like Escher was clever as well as substantive. Escher earned the comparison. Why do we resist it? Perhaps there's still something in us, even this late into human development, that worries that if you're having fun, it can't be art. Escher struggled with that misconception, too, right up to the end. 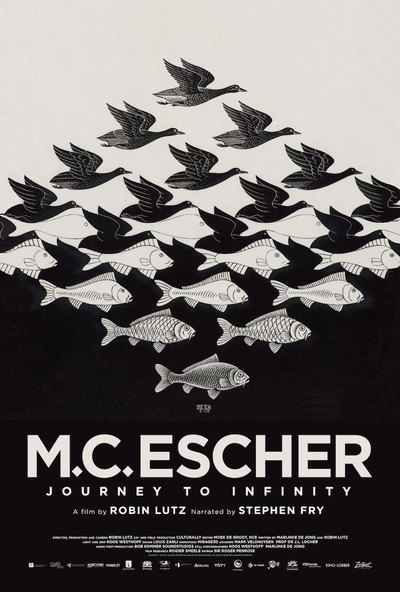 George Escher as Himself

Jan Escher as Himself

Liesbeth Escher as Herself

Graham Nash as Himself