Administrative duties are only one dimension of Musa Hadid’s job as mayor of Ramallah, the de facto capital and cultural center of the Palestinian State. Aside from putting out fires, sometimes literally, in a town with a large Christian population—a fact that may jump at those with reductive views of the fragmented country’s religious demographics—he also acts as ambassador for his people’s cause abroad. A suit-wearing and levelheaded liberator, Hadid is the subject of director David Osit’s engrossing documentary “Mayor.”

Unencumbered by explanatory title cards (other than one at the top of the piece for minimal context) or standard talking-head interviews, Osit’s on-the-ground diary of a series of events that transpired mostly in December 2017 elucidates the geopolitics of the Palestinian-Israeli conflict with humanistic immediacy. Similar to what Frederick Wiseman does in his non-fiction epics, the observational approach here interweaves macro concerns about sovereignty and human rights with the more trivial, but nonetheless meaningful to the citizenry’s morale, such as a Christmas tree lighting or the city’s marketing campaign.

Tracking Hadid’s industrious work from official meetings to more casual encounters with everyday folks, Osit simultaneously provides a lively picture of life in Ramallah, a modern land where KFC and other marks of American capitalism have a presence. Surrounded by threatening Israeli settlements and limited in the use of their own land (Israel won’t allow them to build a sewage plant), locals, Hadid included, feel suffocated but never defeated. The filmmaker often captures the mayor from behind, looking out into his domain, not saying much but undoubtedly thinking about the people that rely on him.

In one of the very few moments where Hadid addresses the camera directly, he wonders if Americans care at all about Palestine and its citizens being murdered and terrorized daily. That sentiment of abandonment intensifies as Ramallah erupts in protests following Trump’s malicious decision to recognize the highly contested city of Jerusalem as the capital of Israel by relocating the U.S. embassy there. Millions of Americans can relate to the chant of “Go to hell, Trump!” that inundate the streets.

The crisis demands an appropriate response from Hadid, one that exalts Palestine’s fight without causing uproar with allies. Indirectly, “Mayor” is also an indictment of the international community’s inaction towards the occupation and inhumane treatment of Palestinians at the hands of the Israeli government. Foreign diplomats urge Hadid to make concessions and to think of a “both sides” solution to a situation with a clear oppressor that shows no desire to relent.

“It’s about dignity,” Hadid empathically states at such an ill-advised and humiliating suggestion. Still, a visit from Prince William—ironic considering England is the former colonial power responsible for igniting the current issues in the Middle East—reminds him and his team of how important, though insulting, it is to maintain an image of openness to cooperation. A montage showing Hadid speak at numerous international events, one of them in Washington D.C., reinforces the distinct public relations aspect of his position.

As a character, Hadid exudes nonchalant determination and shrewd candor, which on more than one instance yields humorous zingers. Yet, though worthy of admiration for how seriously he takes his responsibilities as a government official and the lengths to which he goes to fulfill them, he stays at a distance emotionally. No photos of him as a young man or anecdotes from those who knew him in his early days in politics make their way to the screen. Snapshots from Hadid’s home life with his children, and his love for playing the piano, provide a small peek of the man off the clock. While likely by design to tacitly separate the professional from the personal, there's a lingering desire to learn more about who he is. Near the end of Osit’s astutely potent and structurally dynamic doc (thanks surely in part to editing by Osit and co-editor Eric Daniel Metzgar), an edge-of-your seat sequence involving Israeli soldiers and the mayor himself raises the stakes exponentially and places the viewer in the middle of an all too common occurrence for Ramallah residents. “Mayor” doesn’t feature an impassioned speech detailing the Palestinian people’s ardent plight for freedom because it doesn’t need one. Watching the confrontation in near real time, with lives on the line—a testimony to Hadid’s utmost commitment and hands-on leadership—conveys a forthright message. 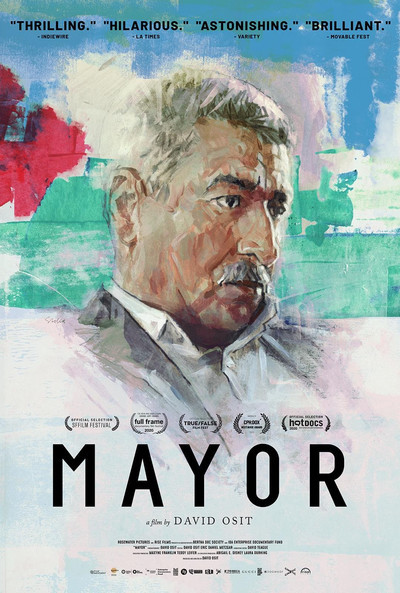