Joe Lynch’s “Mayhem” feels like a timely film in a way it wouldn’t have a couple years ago. Whatever your political party may be, anger has been a palpable emotion in this country recently—it was anger that got Trump elected, and it’s anger that opposes his administration. But what do we do with that anger? How long can we keep it down before it overwhelms us? With his best film since “Wrong Turn 2,” Lynch channels that national anger into a stylish, smart, propulsive gore-fest set in a corporate America that takes no prisoners. But when did it?

Not only is “Mayhem” a brutal, visceral gut punch at a time of the year when we typically drown in awards bait, but it feels like a movie designed to tap into a vein of frustration and anger at a corrupt system. Hate your boss? Can’t control your road rage? Want to push your co-workers down a stairwell? Thinking mean things about the President and his cronies? “Mayhem” channels rage at an unfair society and the bullshit that trickles down from the Powers That Be into a paean to uncontrolled anger. Much more tonally consistent than the similar “The Belko Experiment,” “Mayhem” isn’t as much about id run rampant as it is two people finally loosed from moral and societal constraints in a way that allows them to enact bloody, vicious vengeance. There are times when the whole thing feels like an extended version of that scene from “Kingsman: The Secret Service,” or, worse, the movie that would be the favorite film of the lunatic followers of Tyler Durden in “Fight Club,” but this weird little genre exercise works way more often than it doesn’t, and actually has something to say in the process.

The premise of “Mayhem” is simple in a way that I think a lot of horror masters would admire. There’s an airborne disease, referred to as “Red Eye” for the single red-eye it gives those who suffer from it, that removes all societal and moral governance. So those infected with it don’t just get mad, they get bloody. And it happens to infect a firm (and not just any firm but the one that set the legal precedent for "Red-Eye Defense" by recently getting off a murderer who was infected with it at the time) filled with the kind of well-tailored monsters who barely control their impulse for cruelty anyway. These are the kind of people who gleefully step on the little man in the pursuit of the almighty dollar, and one of the most interesting aspects of “Mayhem” is the choice Lynch makes not to infect “average Joes” but people who seem to have practice unleashing their inner monsters. When John Towers (Steven Brand), the boss of this loathsome company, says to someone beneath him that “You must protect those above you,” it’s the kind of human shield mentality that CEOs and executives have been using for scapegoats for decades.

However, the protection in this case is literal, and the man that Towers needs it from is Derek Cho (Steven Yeun, going from fighting zombies on “The Walking Dead” to maniacal suits here), a rising star who is about to be fired on the day the infection hits the company. Rather than take his corporate execution the way so many do, he picks up a hammer and a nail gun and goes after the people above him, assisted by a client named Melanie Cross (Samara Weaving), who was in the office that day fighting an immoral foreclosure. Caroline Chikezie, Kerry Fox, and Dallas Roberts co-star as corporate monsters at Derek’s company, but the movie belongs to Yeun and Weaving, who both get exactly what Lynch is going for here. They are fearless and intense in ways that other performers would have missed. Yeun proves himself to be a more engaging leading man than I would have expected and Weaving has the energy of Margot Robbie—captivating and a little scary at the same time. They're both really good, and it's their commitment that keeps "Mayhem" humming.

“Mayhem” is at its best when it channels relatable stress into utter genre insanity. It’s like “Office Space” if Michael Bolton went on a murderous spree with a nail gun, playing on workplace stress instead of pure id, and it has a violent momentum that’s hard to deny, well-directed by Lynch (who might use a few too many quick cuts but also stages a brutal scene to Faith No More, so all is forgiven). It can be such a relentless experience that it surely won’t be for everyone, but it works best when considered as a film that’s essentially about people willing to kill, bribe and offer power to anyone to not only save their own skins but also excuse their own horrors. Whether you would levy such accusations at Trump or the candidate he beat a year ago, there's something about watching a movie about unleashing repressed anger at injustice a year after Election Day 2016 that just feels right. 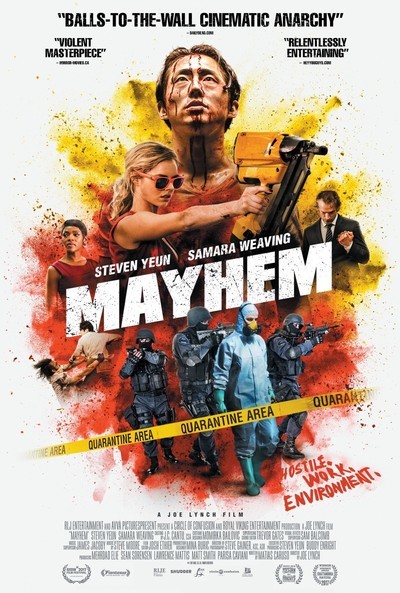 Rated R for bloody violence, pervasive language, some sexuality/nudity and drug use.

Dallas Roberts as The Reaper

Caroline Chikezie as The Siren