In writer-directors Zachary Cotler and Magdalena Zyzak's debut feature film "Maya Dardel," the title character is an internationally renowned poet who feels her best work is behind her. The three celebrated volumes she wrote in her 30s made her name. Now, moving into the twilight of her life, posterity is on her mind. She has no family, no husband, no children. All that matters is her work. Self-pity is not in her makeup, one of her most startling characteristics. Maya Dardel is played by the great Lena Olin, an actress of enormous power and intelligence, and her presence—prickly, intimidating, unpredictable, frankly sexual—is justification alone for the film's existence. Where "Maya Dardel" really works is when it sticks to being a character study. No matter what else happens (and quite a bit happens), it is Olin—and the questions her character provokes ("Who is she? What does she want? Did she really just say that??")—that lets this film off its pretty short self-imposed leash.

The opening scene shows Maya, calling into an NPR radio show from her living room to calmly announce that she plans to commit suicide, but before she does she needs to appoint someone executor of her literary estate. She announces that any young writer interested in the gig should reach out to her agent. "Women need not apply," she says, and then elaborates with eviscerating bluntness: "Because I don't like women's writing." It's a hell of an opening. Maya is not emotional about committing suicide. She doesn't even seem particularly depressed. Her voice is unbroken by softness or sentimentality. One of the biggest traps for actors is feeling sentimental about the characters they play. Lena Olin has never fallen into those traps. It's refreshing to watch an actress not care about being liked to the degree that Olin does.

Maya narrows down the candidates to two finalists: Ansel (Nathan Keyes) and Paul (Alexander Koch). Ansel is so shy he can barely speak above a whisper and seems chagrined that Maya is planning on suicide. He wants her to re-consider. Paul is a horse of a different color, a little bit older, arrogant, meeting Maya on her level. Paul is not easy to manipulate, so it's no wonder, then, considering what we have seen of Maya, that she is drawn to him. The film seesaws back and forth between quiet gentle Ansel and aggressive jerk Paul, somewhat tiresomely pitting them against one another.

There's an unbalanced effect here. Olin is better than the film she's in, and she dominates the other actors onscreen. She can't help it. The scenes with her shotgun-toting off-the-grid next door neighbor (Rosanna Arquette) are fantastic. The two women crawl into the motorboat that sits out in the middle of the woods, and drink vodka, talking about life, death, the world. Two cultural outlaws who have rejected the world's standards, maintaining their own course, however inexplicable to outsiders. These scenes have an untrammeled quality lacking in the rest of the film.

In 1988, American audiences were introduced to Lena Olin in Philip Kaufman's film adaptation of Milan Kundera's "The Unbearable Lightness of Being." In one famous scene, Olin, wearing black lacy underwear and a black derby, crawled on top of a full-length mirror lying flat on the floor, glancing up at her lover through the reflection. Olin was a powerful and unashamed erotic presence, spiked with intelligence, humor, knowingness. She was in ownership of her sexuality, which is why she was able to be so playfully performative with it. Kundera devotes pages of his book to that black derby, the sexual permission it symbolized. It's decades later now, and that scene still lingers like an afterimage. Nominated for an Academy Award for her beautiful performance in "Enemies: A Love Story," she is probably known by a younger generation for her recurring role in "Alias." (Most recently, she appeared in one memorable scene in David Fincher's Netflix series "Mindhunter.")

Despite my quibbles with the structure of "Maya Dardel"'s story, its unnecessary leashing itself to the "contest" between two candidates, the film has much to recommend it, in particular its lack of sentimentality about suicide, art, womanhood. What are we to do with a talent as ferocious and as individual as Lena Olin? Where to "put" her? She's a natural star, in the most old-fashioned sense of the word. If the world were just, the industry would have already figured her out, would have realized that she always belongs at the center of things. Cotler and Zyzak are to be applauded for creating a space where Lena Olin can roam free. 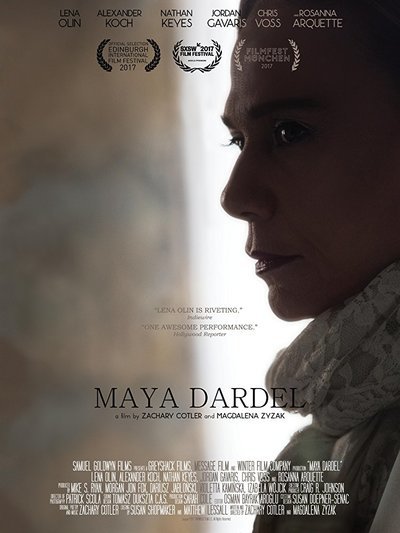