On any given day, an urban subway car stands as a fascinating miniature of society, enabling clusters of time-strapped people with unique battles to face one another. Every now and then, someone harmlessly breaks the unwritten social contract of anonymity with eye-contact or an attempt at a conversation. Sometimes, those attempts turn hostile in the hands of distraught individuals you are better off not engaging with. Debuting director David Gutnik’s partly gripping yet on the whole, wearisome, and aimless “Materna” finds its narrative anchor in one such disturbing incident in the claustrophobic New York City underground. An agitated guy (Sturgill Simpson), whose incessant talking is clearly unwelcome by his fellow passengers, can’t stop harassing those around him. You sense that things will escalate, but you won’t quite know how until the end.

What you will instead get in the meantime are mildly observant portraits of four women who have the misfortune of being in that very same subway car. In case the title isn’t enough of an insinuation, all these lonely females seem to have recent or ongoing stakes in motherhood—either through disputes with their own moms or as challenged parents themselves. Gutnik, along with his co-screenwriters Jade Eshete and Assol Abdullina (the duo also portray two of the principle characters), makes the curious decision of kicking off the anthology with the most ambiguous tale of them all, almost voluntarily distancing the audience from the get-go.

That initial yarn belongs to Kate Lyn Sheil’s moneyed yet vaguely employed Jean. She seems to be working on a high-tech VR project when we meet her, testing it in a form-fitting costume that captures her elegant moves. Not capable of being anything less than memorable, Sheil makes a miraculous impression in her aggressively underwritten segment, selling it almost like a spiritual offshoot of the existential psychodrama “She Dies Tomorrow,” in which she recently starred. Jean doesn’t exactly die here, but her text exchanges with her nagging mama—who cruelly interrogates her daughter’s childlessness and encourages her to freeze her eggs—certainly feel like a form of airless death to the young woman. Especially because Jean actually happens to be expecting in that moment, laying in a bathtub, with plans of her own around her unwanted pregnancy.

A far better-developed chapter that still leaves a lot to be desired, the second slice stars the expressive Eshete in the role of Mona, a struggling actress with a recently canceled TV show, trying to come to terms with the present draught in her career. But the more she yearns to hold onto her sense of worth and let go of her insecurities in the process, the more her mom emerges like the devil’s advocate. In dribs and drabs revealed through texts, we understand that there has been a fallout between the two, after Mona parted ways with her mother’s faith and activities as a Jehovah’s Witness. Eshete unearths tangible emotion and humanity in a rather broad scenario, especially as her Mona finds surrogate maternity under the wing of her older and more experienced colleague Wanda (Cassandra Freeman).

Perhaps the most absorbing (if not exactly the deepest) of the quartet of stories stars Lindsay Burdge as a rash, well-heeled conservative mom named Ruth. Her segment spreads its chips across a variety of hot-button social and political topics of our time, giving us a 101-level rundown of everything—from police brutality and BLM to the so-called cancel culture supposedly enabled by group-thinking mobs. Finding that her detached son Jared (Jake Katzman) got suspended from his school due his bigotry-fueled actions, Ruth questions her motherhood and enlists her liberal brother Gabe (Rory Culkin, absolutely terrific) to get the full story out of Jared. (The irritatingly entitled kid insists he can’t remember a thing.) What follows is an explosive scene set around a dinner table, where Ruth and her husband (Michael Chernus) disseminate their toxic views onto Gabe, who patiently—and with proof—disproves them all in front of a trio that have no use for facts.

The final installment is easily the most significant of “Materna,” with Abdullina in the lead as Perizad, a Kyrgyz woman who goes back to her motherland once her father unexpectedly and tragically passes. Here, the writers actually seem like they have something meaningful to say about three generations of women—Perizad’s mother and grandmother are poetically played by Zhamilya Sydykbaeva and the late Jamal Seidakmatova—all confronted by ghosts of the past while trying to move through their respective griefs in their own ways. This is a soulful, quiet, and very welcome diversion in an otherwise loud movie; a rich, lush oasis that begs for more screen time.

Also an editor by trade (though those duties are not handled by him here), Gutnik toggles between these four interludes a bit haphazardly, trying to arbitrarily connect them with scenes of the rattling NYC train and the occurrence that unfolds within it. The result is less an Alejandro Iñárritu-style collection of interwoven connections, and more something that feels way too happenstantial. After a certain point, the constant tease underground becomes repetitive (despite a strong vintage feel of the cinematography in these scenes), restricting the impact of the reveal in the end. But perhaps more problematically, what “Materna” tries to say on race, class, culture, and society remains all too vague and surface-level in the aftermath. The strongest point Gutnik makes with his film is that we all have a concealed story when we share common spaces in silence. But that sadly isn’t enough of a hook to carry out this scattershot effort.

Now playing in select theaters and available on digital platforms and VOD on August 10. 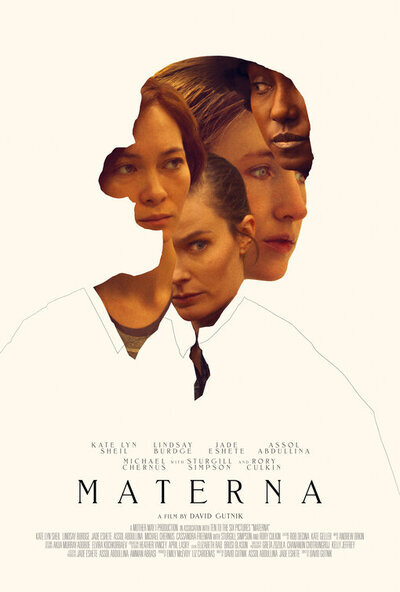