Despite its over orchestration, director Vanessa Roth’s slight, hagiographic documentary “Mary J. Blige’s My Life,” manages to provide profound truths concerning its self-admitted insecure subject. In 1994, Mary J Blige released what she considers her most personal album: My Life. Since the album’s release, the raw 17-song compendium about loneliness, depression, and pining lamentations has been hailed as a classic (the most recent "500 Greatest Albums" list from Rolling Stone listed the record at #126) and an emotional life raft for the artist and her adoring fans, namely Black women.

Coinciding with the album’s 25th anniversary in 2019—and executive produced by Blige and Sean “Diddy” Combs—the documentary is your typical artist-controlled puff piece. We first begin with the singer’s early life growing up in Schlobohm housing projects in Yonkers. There, Blige navigated the devastating crack epidemic ravaging her neighborhood, an abusive household, and a mother dealing with alcoholism. She explains how her tumultuous roots instilled a sense of inadequacy within herself, causing her to self-medicate with booze whereby her only guiding light became her ability to sing.

In chronicling the singer’s life, Roth breaks the major beats into digestible chapters introduced by pithy intertitle cards displaying lyrics from Blige’s songs. In personable sit-down interviews, Blige explains how she found stardom: she recorded a cover of “Caught up in the Rapture” in a mall studio booth, which through a family connection landed in the hands of Uptown Records artist Jeff Redd. Uptown Records founder Andre Harrell, whom this film is dedicated to following his 2020 passing, took an interest in the young phenom and attached Combs as her producer.

What follows after this basic rundown are the standard components of an artist-backed documentary: in highly vulnerable interviews Blige shares her insecurities wrapped in tears; family and friends provide supporting commentary; meet-and-greets with her fans show the connection between the artist and devotees share. Even in these commonplace stagings, the key to this doc, however, is the genuineness that flows from fan interactions. It’s a common cliche for performers to extol their supporters with phrases like “this is for them.” But with Blige, one totally believes it. To the point that I wished we received more intimate meetings with her supporters—there’s a moment where one grateful woman shares with Blige how her voice kept her from taking her own life—rather than repetitive concert footage whereby the singer showcases her seminal tracks to packed arenas.

The centering theme in Roth’s documentary is the quintessential power of music, and how a melody can be a balm in times of hurt, depression, and self-doubt. For Blige and her collaborators like Combs, record producer Chucky Thompson, and songwriter Big Bub, her sophomore album My Life became an outlet for pent up emotions during their respective dark chapters. Whenever they’re captured listening back to classic tracks like the cover of "I'm Goin' Down" or "I Never Wanna Live Without You," you can feel their embedded pains, the shared therapy in between the notes. Likewise when Blige recalls her heartbreakingly traumatic relationship with ex-boyfriend Cedric “K-Ci” Hailey, from the group Jodeci, one still senses the aching fissures that remain.

Even with the affecting recountings, however, the sheen of a highly controlled narrative glosses over this 82-minute documentary. Celebrity interviewees like Alicia Keys, Taraji P. Henson, and Tyler Perry provide very little context to the singer’s career. At other points, I so wished a more incisive hand delved into newer, emotionally precarious terrain, such as Blige’s childhood.

Nevertheless, an accidental kernel of sincerity is often customary in these documentaries of image management. At multiple points, Blige explains her habit of withholding, of sinking into “protection mode.” This film is an extension of said pattern, proving how these emotional focal points still follow this world-renowned artist who effortlessly melds soaring, coarse R&B vocals over infectious hip-hop beats. By falling into restrictive narratives and familiar tones, Roth’s “Mary J. Blige’s My Life” fortuitously provides a love letter to Blige’s fans that teems with the same truthful message as the singer’s best music. 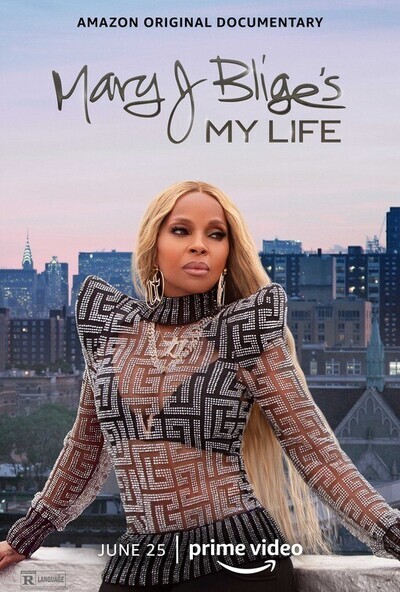 Mary J. Blige as Self

Sean Combs as Self

Taraji P. Henson as Self