On the back cover of Leonard Cohen's album Songs from a Room, there is a photograph of Marianne Ihlen. She sits wrapped in a white towel, fingers poised on Cohen's typewriter. Her hair is tousled, her grin wide. The windows are shuttered but there's a feeling of light, warmth, and breeze in the room. Ihlen, Leonard Cohen's muse/partner (one in a long list), lived with Cohen in the mid-1960s on the Greek island Hydra, where they met. She eventually traveled to join him in Montreal, New York. She famously inspired many of his songs, including "Bird on the Wire," which she suggested to him after seeing birds sitting on a telephone wire like musical notes. And then of course, there is "So Long Marianne," where Cohen sings:

I'm standing on a ledge and your fine spider web
Is fastening my ankle to a stone.

Nick Broomfield's "Marianne and Leonard: Words of Love" is meant to highlight the role of Ihlen in Cohen's life, using sun-drenched home movie footage from Hydra, showing Ihlen on a boat, golden and gleaming in what looks like a paradise. But "Marianne and Leonard" turns out to be a rather run-of-the-mill documentary about Cohen's journey, taking us down well-documented paths - the early support of Judy Collins, the chaotic Isle of Wight concert in 1970, a drug-fueled show in Israel where Cohen shaved his beard mid-show, his time in the monastery, losing all his money, the Phil Spector album (if you're a Cohen fan, you know all of it by heart). Broomfield is somewhat notorious for inserting himself into his films ("Kurt & Courtney," "Tales of the Grim Sleeper," “Tracking Down Maggie) and he does so here as well. Broomfield knew Ihlen (he can't resist informing us that the two were "lovers"), and, as with Cohen, Ihlen championed Broomfield's early work, encouraging him to start making films. Broomfield says he "became intoxicated by the beauty of [Cohen and Ihlen's] relationship."

But Ihlen herself doesn't really emerge into specificity, and some of the footage - particularly footage of her on her death-bed - feels like an invasion of privacy. Ihlen, dogged for years by reporters, even after her relationship with Cohen ended, tried to live quietly. It was hard to avoid publicity, though, when Cohen continued to reference her on stages around the world. Still, "Marianne and Leonard" gives the sense that the rest of her life was an "aftermath" to that powerful relationship. Included are tape recordings of Ihlen speaking, and her pain at having to let Cohen go is still raw in her voice, decades later. There are recordings of Cohen, too, recalling his time on Hydra, writing his second novel Beautiful Losers in one long burst of energy, sitting in the sun, while Marianne brought him food, surrounding him with love and comfort. His memories of her remain extremely specific, even after years of separation, and this is part of Cohen's appeal to his fans: The women in his songs are not generalized, like in so many songs. They aren't even idealized figures. They sound like real people, complex women whom Cohen knew well.

The strongest aspect of "Marianne and Leonard" has nothing to do with Ihlen or Cohen, but is the vivid picture painted of the 1960s counterculture, particularly its manifestation on Hydra. Everything was a party until the party came to a crashing halt. People found Hydra a haven, a place to escape the boredom and conformity of life elsewhere. But the survivors (and there aren't many) remember the drugs and alcohol, the broken marriages, parents abdicating their responsibilities, children growing up too fast. (Ihlen's own son could not adjust to life after Hydra and was institutionalized.) The roster of Hydra people now lost to suicides, overdoses and insanity, is lengthy. One woman, a child on Hydra at the time, says in the film that many were "irreparably damaged" by their time there. Broomfield really knows what he is doing in these sequences, getting fantastic interviews from people who were there. The most vivid character in Marianne and Leonard is the 1960s. Cohen flourished. Others were not so lucky.

Some of the interview subjects take on a life of their own, like Aviva Layton (widow of poet Irving Layton, who took Cohen under his wing early on). Her comments spark the film with her no-nonsense one-liners and sense of humor. "Poets do not make splendid husbands," she states flatly. "Open marriage was the thing then. Whatever the hell <em>that</em> was," she says, followed by a burst of laughter. She brings some insight into the sometimes-tormented relationship between Ihlen and Cohen: "She wanted to be with him, and you can't be with Leonard." Cohen's guitarist Ron Cornelius shares memories of the insanity of touring with Cohen, the drugs, the women. Cohen was not built for monogamy, nor did his era support it. He speaks openly of being addicted to sexual conquest. In "I'm Your Man," Cohen wrote:

I'd crawl to you, baby, and I'd fall at your feet
And I'd howl at your beauty like a dog in heat
And I'd claw at your heart, and I'd tear at your sheet
I'd say please
I'm your man

It's not surprising Cohen's success with women, given lyrics like that.

Broomfield's portrayal of Cohen's life and career is not as interesting as all the Hydra stuff, but it's fun to see the footage, concerts, shows, parties. Ihlen, though, remains a gleaming vision on a sailboat, a woman caught up in "free love" who found herself in actual love with a very unattainable man. It's one of the oldest stories in the book. Being a muse may be flattering, but being a muse is also lonely. As Ihlen says at one point, "My love for him destroyed me." She died in July 2016. Leonard Cohen died just three months later. 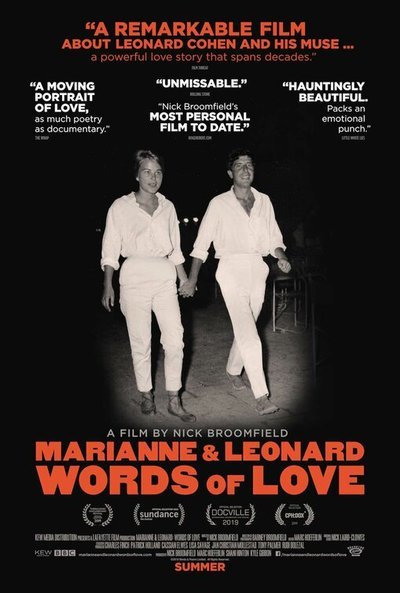 Leonard Cohen as Himself

Marianne Ihlen as Herself