“Margrete: Queen of the North” is a historical epic from Denmark that contains almost everything that one might want from such a thing—palace intrigue, familial conflict, sex, violence, jealousy, betrayal and so on. What it doesn’t really have is much of anything in the way of a point or purpose. Although it's undeniably well-made, it lacks the kind of energy that might have helped make it truly come alive, and seem like more than a historical reenactment.

Loosely inspired by actual events, the film is set in 1402 and as the story opens, the ambitious Queen Margrete (Trine Dyrholm) has managed to establish a peaceful union between Denmark, Norway, and Sweden that she rules through King Erik (Morten Hee Andersen), whom she adopted as young boy years earlier following the mysterious death of her own son, Oluf. To further solidify her position and to help stave off a potential invasion from Germany, a marriage has been arranged between Erik and England’s Princess Philippa that will help create a new alliance. On the eve of the wedding, just as negotiations regarding the dowry have kicked into high gear, things take a turn when a man (Jakob Oftebro) arrives in court proclaiming that he, in fact, is the real King Oluf and therefore the true ruler of the land.

At first glance, the claim appears to be preposterous—it cannot be mere coincidence that he should turn up just as the all-important wedding is about to commence—and Margrete believes that he's an imposter. However, other people in power are convinced the newcomer is actually who he says he is, threatening to throw both the wedding and the fragile alliance between the countries into doubt. When Margrete learns that no one actually saw Oluf’s body after his alleged death, she's forced to confront the possibility that his story is true. With only a few days before everything that she has worked for collapses around her, Margrete sends off a couple of trusted advisors to look into the story and does some nosing around on her own. Meanwhile, the increasingly frustrated Erik lets power go to his head and finds himself unwittingly being manipulated by a number of people who wish to seize control for themselves.

In terms of surface details, “Margrete: Queen of the North” is certainly of interest. Director Charlotte Sieling has given the production (filmed in the Czech Republic) a handsome mounting, while still honoring the grittiness of the period. The film also benefits from a strong, convincing performance from Dyrholm as Queen Margrete, a ruler who has devoted everything to bring peace to the land and will go to any lengths to ensure that all that she has worked for is not lost. Queen Margrete could have easily been reduced to little more than a cliché but she makes her into a real and compelling character.

Too bad that the same cannot be said for the film as a whole. While the basic outline of the story is intriguing, the screenplay by Sieling and co-writers Maya Ilsee and Jesper Fink never quite figures out how to make it compelling in cinematic terms. Outside of Margrete herself, the other characters have not been developed especially well, and it becomes hard to work up much interest in all of the intrigues and betrayals on display. By the time "Margrete" gets to its grand finale, what should have made for a shocking and powerful moment will inspire little more than a shrug from most viewers.

“Margrete: Queen of the North” has been made with some undeniable skill and I suppose that those with a particular interest in the period being covered may find it sort of interesting on some level. However, it never quite takes advantage of the elements that it's working with to the point where it is worth a look. If you are looking for a complex tale of corruption, power, and deceit, involving an empire being threatened by both outside forces and internal familial squabbling, you are probably better off staying at home and binging “Succession.” 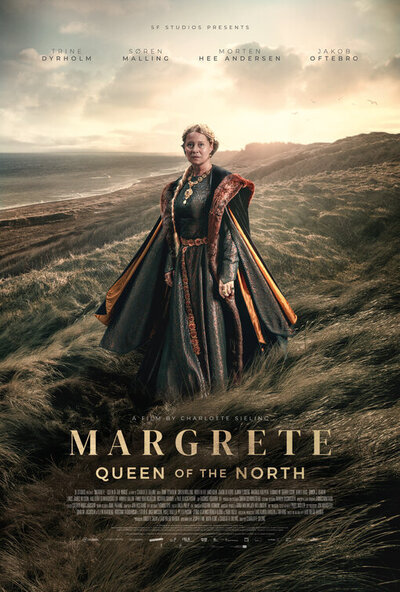