How do movies like “Marauders” get made? One assumes that every film has a creative impetus at some point in its production, but it’s incredibly hard to find one buried underneath this morally vile, incompetently made thriller. And so one has to wonder if it wasn’t a “paycheck gig” for everyone involved. Was it merely the “business” aspect of show business? Or did director Steven C. Miller set out to make an intense thriller about on-the-edge cops and deadly criminals that would rivet viewers to their seats and justify their ticket or On Demand costs? Even for how negatively I responded to the bafflingly inept “Marauders,” I choose to believe that Miller and his overly talented cast didn’t just do it for a paycheck. Even with that in mind, it’s hard to forgive.

“Marauders” opens with a scene straight out of this year’s “Triple 9,” as a series of masked men pull off a complex bank heist. They’re dressed like the protagonists from the video game “Army of Two” (impersonal/terrifying skull masks and bulletproof gear), and they’re highly-coordinated and technologically savvy. They even throw down speakers, so a Siri-esque voice can issue orders instead of the actual attackers—ex., “Do not hit the alarm or we will kill your manager.” They complete the assault, and on the way out they shoot said bank manager point blank with a shotgun. From the beginning, “Marauders” displays signs of hyperactive, inept filmmaking, the kind that uses shaky cams and quick cuts instead of actual visual compositions. It’s angry, loud and annoying.

We soon learn that the bank was owned by a high-powered figure named Hubert (Bruce Willis, doing the bare minimum he can to get paid), who hides secrets of political and business leaders in his safety deposit boxes. Of course, the criminals of “Marauders” have more complex goals than mere accumulation of wealth, which is something that FBI Agent Jonathan Montgomery (Christopher Meloni) quickly uncovers, with the help of fellow agents Stockwell (Dave Bautista) and Wells (Adrian Grenier), and local cop Mims (Johnathon Schaech). Mims happens to have a wife dying of cancer, which should add to depth to his character but just feels manipulative.

“Marauders” is such a by-the-numbers VOD-cop movie that it becomes depressing. A few scenes of plot furtherance as Montgomery tries to uncover the identity and purpose of the robber-murderers unfold, and then we get another crime, and then a bit more procedural, and then another crime, and then a conclusion. Roll credits. In between this predictable structure, we’re given next to nothing to care about. Meloni is an interesting choice for the role that essentially becomes the lead (he’s an underrated actor who more often gets supporting roles) but the writers bestow him almost nothing interesting to play, forcing anger to become his defining trait. Hence, he opens doors like he’s mad at them. Grenier looks bored and Bautista gives a supporting part more than it deserves.

And then there’s the final act, full of revelations and twists designed to shock but just rips gigantic plot holes in the rest of the film, while also forcing it into a morally dubious conclusion. What is the point of “Marauders”? One can’t take it seriously as social commentary at all, but it tries so hard to include that kind of material that it feels like it wants to be more than “dumb fun.” I’m all for a well-made action film, even of the VOD variety, that delivers the thrills. But “Marauders” forgot the “fun” part. It’s just “dumb.” 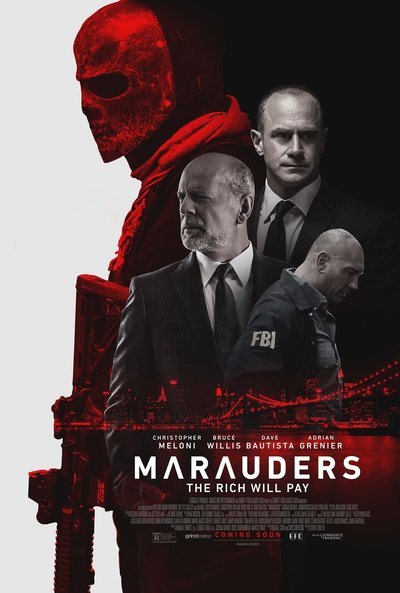