There's a scene at the end of "Mandingo" in which the young plantation master goes out to the slave quarters after his slave Mede. The master's wife has just given birth to a black baby, undoubtedly Mede's, and after poisoning his wife, the master intends to boil Mede alive. Mede builds the fire but demurs at the invitation to jump into the pot. The master shoots him, and the blast knocks him into the boiling cauldron. As he screams and struggles to escape, the master pushes him under with a pitchfork.

In the wretched potboiler (4.5 million copies in print) from which this piece of manure was made, the master goes on to boil Mede down into soup, which he pours on the grave of the unfaithful wife. One cannot say that taste restrained the filmmakers from adding this additional touch, since "Mandingo" betrays not the slightest sign of taste, but perhaps they didn't want to unduly delay the ending, in which James Mason dies not only as a character but surely in spirit.

"Mandingo" is racist trash, obscene in its manipulation of human beings and feelings, and excruciating to sit through in an audience made up largely of children, as I did last Saturday afternoon. The film has an "R" rating, which didn't keep many kids out, since most came with their parents. Besides, here in Chicago we taxpayers pay hundreds of thousands of dollars a year to subsidize a censorship apparatus operated by the police department. Any film to be shown to those under 18 must have a city permit, and "Mandingo," incredibly, was given one.

If the city believes "Mandingo" should be shown to children, then there are no possible standards left and the only thing to do is transfer the censors to the parks department, where they can supervise paper‑plate‑ throwing contests. Here is a movie which, in addition to the nauseating scene I've already described, has frontal nudity, flagellation, the auctioning of naked slaves and a fistfight in which heavyweight boxer Ken Norton kills his opponent by tearing out his jugular with his teeth.

The movie also is none too subtly exploitative of the subject of interracial sexual intercourse, which is the only kind that takes place. We never see the master's wedding night with his new bride, only the morning-after savagery when he accuses her of not being a virgin—which is correct, as she was deflowered by her brother. The plot construction is not exactly subtle. After the scene in which the mistress of Falconhurst blackmails the slave into making love, there's a jump of nine months.

What James Mason, as the old master of Falconhurst, is doing in this film is beyond me; He told one interviewer he needed the money for his alimony payments, but surely jail would have been better. His performance is adequately decrepit, and Perry King, as his son, has a few tender scenes with the young slave (Brenda Sykes) he takes as his "bed wench." But even those scenes are only a setup for the final bloodletting. This is a film I felt soiled by, and if I'd been one of the kids in the audience, I'm sure I would have been terrified and grief stricken. 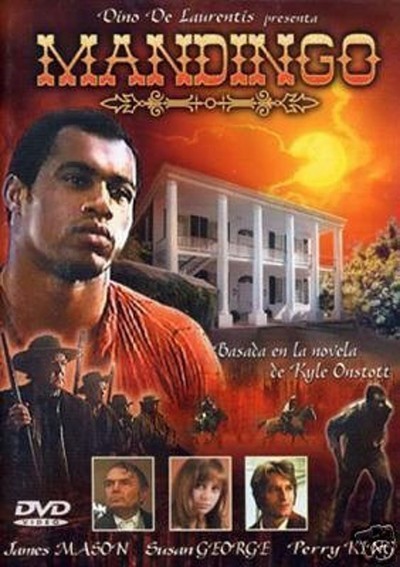