Just because you’re Isabelle Huppert doesn’t mean that every movie you take a lead role in has to be a provocative auteur opus. The French diva’s latest picture to be released in the U.S., given the not quite accurate English title “Mama Weed” from “La daronne,” which is French for something like “The Mum,” is what we in the States like to call a solid entertainment.

Directed by Jean-Paul Salomé from a script he wrote with Antoine Salomé, adapting a popular novel by Hannelore Cayre (which appeared here with its title translated to “The Godmother”), “Mama Weed” has a narrative that progresses with the inexorable logic of dominoes falling. Huppert plays Patience, who works as a translator for the narcotics division of a French police precinct. (The squad has a poster for the Soderbergh drug war epic “Traffic” on the wall of its war room.) After an eventful bust, she tells colleague Philippe (stalwart Hippolyte Girardot) that she’s had it. “It’s not work,” she insists, “it’s existential.”

Eventually though, it is work—she bristles more and more at the injustice of France’s drug war. When she finds out that one of the kids—for many of the hash hustlers are little more than kids—she’s tracking is the son of a nurse who cares for Patience’s aged, ailing mom, Patience does some mistranslating and redacting to make sure the fellow isn’t swept up in the dragnet. Eventually Afid (Yasin Houicha) does go down—but not before Patience has managed to inherit custody of a massive hashish shipment.

With the help of a drug-sniffing adopted German Shepherd named DNA and some Muslim-friendly disguises, Patience creates a new persona, “La daronne,” arranging to foist her wares on a couple of low-level guys nicknamed Scotch and Cocoa Puffs. She redoes her apartment’s basement to create an impenetrable storage space for the stuff. She pays her back rent and the money she owes the care facility that’s housing her mom. Eventually she starts using code with her building’s landlord (Nadja Nguyen) to ascertain the latter’s interest in a money-laundering scheme. The interest is there.

The interest is there, too, for Philippe, who grows more besotted with Patience even as he becomes more obsessed with catching “Mama Weed.” Patience’s ingenuity sees her leaving locker keys for Scotch and Cocoa Puffs in cookie packages in the local market; a big dress shop is the scene of a narrow, high-speed escape for Patience as Philippe and the squad move in.

Huppert imbues Patience with cleverness and a kind of abashed circumspection that makes the character’s entrance into the criminal world fun to watch. She bristles when Philippe describes "Mama Weed" as an “old lady”; maybe, she says, the nickname means not that she’s old but that “she’s a mum; a dignified woman.” She is frank in her disdain for a system that “sends kids to jail to get radicalized for three grams of hash.” She’s a rooting figure, and the movie doesn’t let her or the audience down in that respect.

While Salomé isn’t anything but a mainstream director, he’s a good one, keeping the movie percolating up to its crowd-pleasing finale and coda. “Mama Weed” has its quaint side, especially as marijuana laws worldwide get liberalized (happily), but it provides a warm buzz nevertheless.

Now playing in select theaters and available on VOD on July 23. 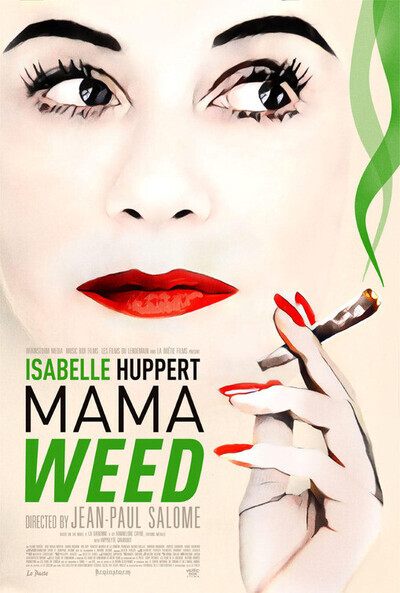