There’s a dopey twist at the end of and a lot of dead air throughout “Malignant,” a 111-minute long possession thriller about a woman who’s haunted by a vindictive killer who may or may not be her imaginary childhood friend. Admittedly, the movie’s twist could have been the basis for something lurid and fun instead of over-produced and underdone. But “Malignant,” the latest horror movie directed by James Wan (“The Conjuring”), hangs around whenever it most needs to push its pokey plot along. Prioritizing atmosphere over plot development is one thing, but loitering about such a visually uninspired space (sorry, Seattle) can be pretty frustrating, especially in a psychodrama built around an underdeveloped heroine and her mostly implied backstory.

What’s it like to be stuck inside the head of Madison (Annabelle Wallis), a tortured murder suspect who can’t remember how she’s related to Gabriel (Ray Chase), a feature-less silhouette with long black hair and a bad habit of killing people? “Malignant” doesn’t provide any satisfying answers because Madison’s creators treat her like an opportunity for obnoxious shock scares instead of a fully realized character or, better yet, the emotional anchor for a feature-length horror movie.

Madison’s consistently presented as an opportunity for tacky effects-driven violence, as in her first scene, where she’s thrown head-first against a wall by her abusive husband Derek (Jake Abel). Madison’s pregnant at the time, and Derek, who’s obviously not long for this world, blames her for previous miscarriages, which are otherwise not visualized, or built up to in a meaningful way beyond thin expository dialogue. Stuff like “How many times do I have to watch my children die inside of you” and “maybe you need to stop getting pregnant.”

Derek soon gets got: he dies by Gabriel’s wispy hands, and in a scene that looks suspiciously like a cut scene from Wan’s “Insidious” movies. Wan seems to love this style of strawman drama. First, he presents us with the canned set-up for a confrontation, then we watch him slowly resolve tension through scare tactics that make the American-produced J-horror remakes of the mid-'00s seem cutting edge. Flickering television and phone screens, unexpected faces reflected in glass surfaces, and gaunt wraiths who all seem to shop at Hot Topic. These are fine enough elements for a horror movie, but not when they’re built up to such a laughable degree, and without much visual flair or distinction. Almost every set piece or kill scene feels anticlimactic.

Madison’s friends and family members are also used as props to set up more clammy scare scenes. It’s almost as if Wan, who shares a story credit with Ingrid Bisu, and screenwriter Akela Cooper, don’t trust their audience enough to know or care about anything beyond Powerpoint-style bullet point dialogue, like when dreamboat policeman Kekoa Shaw (George Young) tells Madison’s suspicious sibling Sydney (Maddie Hasson) that “the doctor said your sister had three miscarriages in the last two years.”

Sydney doesn’t have much of a personality, but that’s presumably so that Madison can later describe her sister as the sort of “blood connection” that she’s always “yearned for,” but took for granted, despite being “right in front of me all along.” And Kekoa’s supposed to be cute, I guess, so fellow cop Winnie (Bisu) can awkwardly swoon over him: “we need to find that missing half” he says, speaking about Gabriel’s half-missing murder weapon, to which she says, “Yeah, don’t we all?” There's no follow-up to that tossed-off line, because these characters don’t seem to matter to each other beyond setting up the next shock scare.

Wan’s never been the most technically adept or sophisticated storyteller, but his weaknesses as a filmmaker are especially apparent throughout. In one especially embarrassing scene, Wan cross-cuts between Madison and Kekoa, who’s seated next to his lollipop-sucking partner Regina (Michole Briana White), as Madison tells the cops who’s responsible for all the murders.

It’s Gabriel, of course, and we know that already, so it’s hard not to laugh when the camera pushes in on Young and White as Madison explains that “the killer said he was Gabriel.” Back to them, waiting with baited death. “My Gabriel.” The strings section goes crazy on the soundtrack. Regina pauses, and shakes her head. Still in the extreme foreground: Young, now looking down and off-camera. His head takes up a third of the screen and is out of focus. “Wait, you’re saying that the killer is…your imaginary friend?” The answer to that question, and a few others await you in “Malignant,” a horror movie that is as long as it is underwhelming.

Now playing in theaters and available on HBO Max. 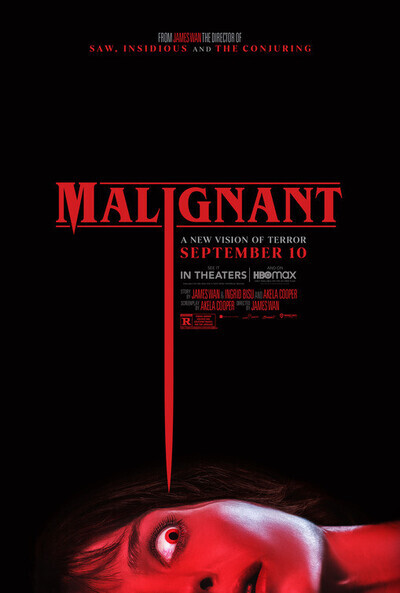 Rated R for strong horror violence and gruesome images, and for language.