A director on the brink of success and his girlfriend spiral through their flaws and past sins in writer/director Sam Levinson's two-hander "Malcolm & Marie," now on Netflix. John David Washington and Zendaya star in the drama that’s been criticized for how it takes aim at film critics, but that’s only part of the conversation, and a part that feels like it’s not supposed to make the man spewing his own issues with the way people talk about him and his art look all that great. Malcolm (Washington) is largely a self-centered asshole, the kind of guy who makes everything about him, even the life story of Marie (Zendaya), and then refuses to give her credit for it. He can’t stand it when someone he purports to love isn’t 100% supportive of his work, is it surprising that reviews by strangers drive him somewhat insane? It's definitely not a great look for Malcolm and Levinson's insecurities that Levinson takes aim at a specific publication and its critic who gave his "Assassination Nation" a bad review, but my issues with “Malcolm & Marie” go deeper than the way it attacks modern film criticism. I'm almost impressed by the way it insulates the film from bad reviews as fans will just claim critics are being sensitive. Nice play, Levinson.

Malcolm is happy. He’s drinking, dancing, and singing along to James Brown in the gorgeous Malibu house that the production company has provided for them. He’s also ranting about readings of his work from the jump, complaining about critics who place racial and political context into art in a haphazard, insincere way. He’s not entirely wrong about all of it, but there’s an aggression in his tone and prowling around his kitchen that reveals it as mostly insecurity, and I believe that's the way Levinson wants us to read it too. He says truly pretentious things like “I’m not elitist, I’m a filmmaker” as if being an artist makes him exempt from criticism while Marie seethes and smokes. She’s been here before. But she prods him a bit too, pointing out that the 'apolitical' filmmaker is making a movie about Angela Davis and noting that she doesn’t know who William Wyler is either. And then Marie reveals why she’s upset: Malcolm didn’t thank her. He made a movie partially based on her life and couldn’t even be bothered to give her credit in public.

The first 25 minutes of “Malcolm & Marie” are a strong, standalone short film. They’re mostly sharply written and Zendaya and Washington add what feels like history between the lines. I was totally with it. But I'm not convinced we learn anything more in the following 80 minutes that we didn't in the first 25. Oh, there are some great monologues—Zendaya nails each of hers in a way that almost holds the entire film together—but Levinson allows the focus and pacing of the film to get away from him. The whole thing starts to feel increasingly like the voice of a writer and not two separate characters living real lives.

Levinson and his stars do hit on interesting themes now and then, like how we use other people, especially when it comes to male artists using the women they’ve known. Malcolm seeks to hurt Marie by revealing all the other people he amalgamated into the heroine of his film, but it really shows how he’s an artist who takes more from the women in his life than he gives. The biggest problem with Levinson’s script is that he starts to circle the same drains over and over again. Are these fights intentionally repetitive? Perhaps. The point may be that couples often have to hammer home the same points, but that doesn’t necessarily make for interesting drama. Worst of all, Levinson misses the rhythm. These aren’t fights, they’re monologues. There’s a difference. And the structure adds to the overly scripted feel of it all. It starts to all sound as insecurely crafted as Malcolm’s critical complaints.

So why watch this fractured couple? Mostly for performance, although it should be noted that Levinson’s regular director of photography Marcell Rév keeps the 35mm black & white look of the film captivating and it’s fluidly edited by Julio C. Perez IV. Washington gets to break out a few new emotional registers we haven’t really seen before and is at his best when he’s allowing Malcolm to be truly awful, a man who takes out his own insecurities on everyone around him. However, this is Zendaya’s movie, and she proves again that she can add depth to everything she does. As is often the case on “Euphoria,” her quietest moments are her strongest, conveying the feelings of someone trying to decipher if the hurt she now feels means the end of a relationship or if this is just another bad fight.

Two-handers are inherently difficult, and there will be people who argue that “Malcolm & Marie” would have worked better on a stage. I don’t think that’s the issue. I think Levinson and his team found a way to make this feel cinematic. They just didn’t quite crack how to make it feel genuine. 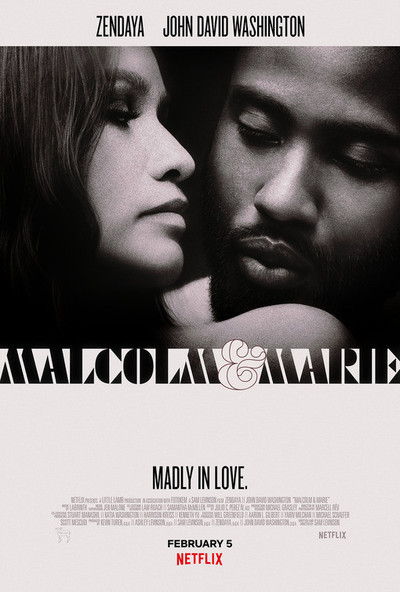