All the artistry and absurdity, glamour and the grit of the fashion industry are on display in the documentary "Mademoiselle C."

The "C" stands for Carine, as in Carine Roitfeld, who was the editor-in-chief of French Vogue for a decade until she left in 2011 to create her own magazine. Before that, she was Tom Ford's muse at Gucci in the 1990s, helping define the label's distinctive brand of daring, sexually charged design—porno-chic, as it become known, although Roitfeld would prefer to think of it as erotic-chic. I suppose it depends on how you feel about implied spanking.

Roitfeld herself, however, oozes chic from every pore in her being without any sort of qualifier. Leggy and sleekly Parisian in her high heels, pencil skirts and plunging button-down blouses, she radiates a sense of culture and sophistication. Her own personal style has become hugely influential and made her a celebrity unto herself alongside such fashion-conscious stars as Sarah Jessica Parker, Sean Combs and Kanye West, whom she counts as friends.

Director Fabien Constant is clearly a fan. "Mademoiselle C" doesn't deify Roitfeld—it's too understated for that—but it's hardly a warts-and-all depiction of this towering fashion figure. Constant himself wonders in the film's press notes whether he ever captured Roitfeld's true nature, or whether she played a role for the camera each day.

She's certainly chattier than the infamously icy Anna Wintour, the Vogue editor who was the subject of the 2009 documentary "The September Issue." But Roitfeld remains a bit mysterious; in a rare flash of deep emotion, she gets choked up while reflecting on the power of generational bonding now that she's a grandmother.

Still, because she is who she is, she provides intimate access to a luxurious world, one that's filled with inventive imagery as well as ridiculous requests. On a glossy magazine page, the vision of a willowy blonde in giant angel wings surrounded by ethereal lighting with white feathers floating all around sounds heavenly. In execution, it's a mess of air, hair and fluff.

One of  "Mademoiselle C" most intriguing aspects is how it explores the gap between fiction vs. reality, especially as Roitfeld finds her own voice and hones her own dreamlike visuals on the pages of CR Fashion Book, the publication whose launch is chronicled here.

The film also follows how becoming a grandmother for the first time influences not only her sense of self but also her work. Roitfeld's longtime partner, Christian Restoin, and their gorgeous, stylish children, Vladimir and Julia, appear briefly in the film, which fleshes her out a tad. They'd clearly prefer to be elsewhere, living their own fashionable lives, although Julia's arrival at a photo shoot with her infant daughter does provide us with the amusing image of Karl Lagerfeld pushing a stroller in all his sartorial splendor.

Among the other surreal sights "Mademoiselle C" treats us to: curvaceous Sports Illustrated swimsuit model Kate Upton on a farm, done up as a naughty version of Dorothy from "The Wizard of Oz," with a muscular male model standing next to her half-dressed in a cow costume. (A baby also pees all over a little girl in a princess get-up during this photo shoot with famed photographer Bruce Weber.) Roitfeld seems constantly inspired by the prospect of pushing boundaries and expectations, and that, in turn, is inspiring to watch.

If fashion interests you, or if merely the creative process interests you, "Mademoiselle C" will hook you and draw you in. As a director, Constant is rather straightforward. He stays out of the picture, and he knows well enough to allow the clothes—and the jewels, and the models, and the fantasy world they all represent—to speak for themselves. 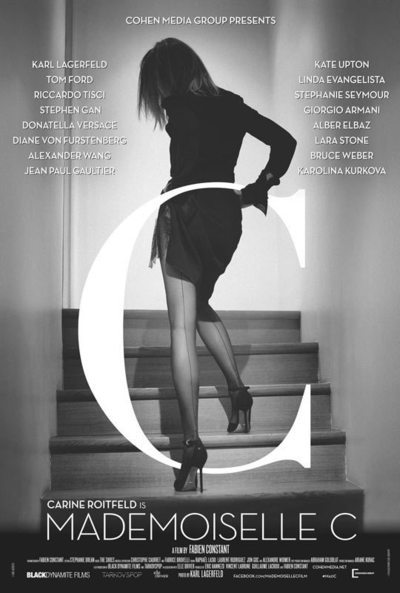 Tom Ford as Himself

Donatella Versace as Herself

Karl Lagerfeld as Himself

Carine Roitfeld as Herself