For a classic literary character whose motivations are so plain and so primal, Emma Bovary has been a tough nut to crack on screen.

Several esteemed directors have given it a shot over the years, including Vicente Minnelli in 1949 and Claude Chabrol in 1991. Finally, a woman—Sophie Barthes—has directed and co-written a film version of “Madame Bovary,” but strangely, that doesn’t result in any more richness or enlightenment.

Whereas the tone of Gustave Flaubert’s great novel—which created such a scandal when it was published in 1856—was all-knowing and almost mocking of his characters, their follies and their foolish decisions, Barthes takes a tack of emotional detachment. Mia Wasikowska is more than willing to make this flawed, doomed heroine enormously unlikable, but her choices seem impetuous and childish rather than a deeply felt backlash against stifling boredom within a loveless marriage at a time when women had zero agency over their own lives.

Perhaps the intention was to contemporize this figure, though; with her distractingly flat American accent, Emma Bovary could be Betty Draper, or a reality-show housewife, or the mom waiting in front of you in an SUV in the pickup line at school.

Barthes and co-writer Felipe Marino have significantly streamlined and mixed up the narrative, beginning with Emma’s tragic ending and working their way back to it. They’ve jettisoned the beginning of the book focusing on husband Charles’ childhood, they do away entirely with the couple’s daughter, Berthe, and they combine two male characters to create Emma’s first, tumultuous lover. Major emotional shifts come abruptly, while other sections are languid, brooding and often wordless to reflect Emma’s isolation.

This “Madame Bovary” begins as teenage Emma is packing up her belongings and preparing to leave the convent to marry the man her farmer father has arranged as her husband: country doctor Charles Bovary (Henry Lloyd-Hughes). But life in the small, provincial town of Yonville soon makes her miserable, as she spends her days alone reading or wandering in the garden while Charles tends to patients. Even when he’s home, he’s such a numbing drag that he may as well not even be there.

Emma longs for more—excitement, passion, status, love. She shows restraint at first when smitten law clerk Leon Dupuis (a boyishly romantic Ezra Miller) skittishly professes his affections for her. But she’s definitely ready for extramarital activities once the dashing Marquis (Logan Marshall-Green) makes even more overt advances. The affair emboldens her and gives her glimpse of the good life, inspiring her to spend more and more money she doesn’t have on lavish dresses and decorations from the obsequious dry-goods dealer Monsieur Lheureux (Rhys Ifans), who’s all-too happy to continue extending her credit. Marshall-Green and Ifans both do their best to enliven the proceedings, the former with sheer sex appeal and the latter with sly menace. Similarly, Paul Giamatti—who starred in Barthes’ last feature, the kooky and clever sci-fi comedy “Cold Souls”—nails the pushy patter of local pharmacist Monsieur Homais.

But as we know—either from reading the book in high school or merely from watching the first few moments of Barthes’ film—Emma’s longing for upward mobility becomes her downfall. There’s little tension as her romantic and financial calamities collide, only mere traces of tragedy. Even at nearly two hours, much-needed character development is sorely lacking.

“Madame Bovary” is never less than lovely to look at. Cinematographer Andrij Parekh’s melancholy images seamlessly combine muck and luxury, sometimes within the same image, in a way that’s reminiscent of Joe Wright’s “Pride and Prejudice” and Thomas Vinterberg’s “Far From the Madding Crowd” earlier this year.

And the clothes are gorgeous (the work of costume designers Christian Gasc and Valerie Ranchoux) as Emma’s tastes become more expensive and extravagant. Fastidiously tailored and flouncy, her ornate gowns in a wide array of jewel tones vividly reflect her transformation from pious convent girl to brazen adulteress.

But the lavish aesthetic trappings, combined with the emotional emptiness, only combine to make Barthes’ film feel like “Madame Bovary: The Fashion Show.” 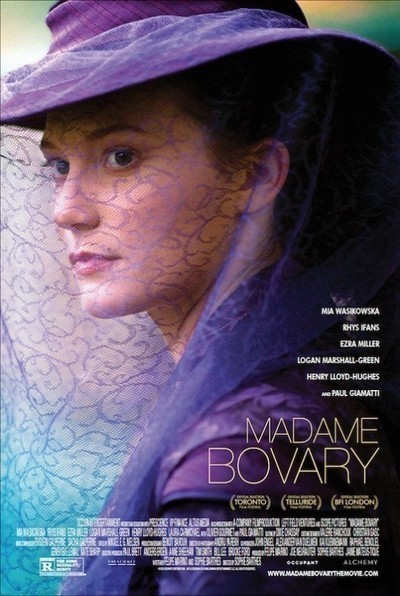 Logan Marshall-Green as The Marquis