Lunana: A Yak in the Classroom

Gentle and lilting, “Lunana: A Yak in the Classroom” moves at a hiker’s pace.

That’s literally the case in the film’s first act, a pilgrimage through the Bhutanese highlands that sees human populations dwindle as the altitude climbs. But even after its protagonist, Ugyen (Sherab Dorji), reaches the far-flung village of the film’s title, where he’s been consigned to teach the local children, “Lunana” proceeds with a slow, steady flow that complements the modest charms of its familiar fish-out-of-water narrative.

Only the second movie submitted for Oscar consideration by the small landlocked Asian nation of Bhutan (the first was Khyentse Norbu’s “The Cup” in 1999), “Lunana” emerged as a surprise contender for Best International Feature Film when Oscar nominations were announced earlier this week. Itself a story of underdog triumph more astounding than anything “Lunana” puts forth in its tranquil 110 minutes, this awards recognition shines a welcome spotlight on both Bhutan and its philosophy of “gross national happiness,” which informs the film’s narrative.

Instead of measuring development in gross domestic product, the kingdom of Bhutan—situated on the slopes of the Himalayas, between India and China—assesses its growth according to a set of conditions like culture and community vitality. Inspired by the Buddhist principle of The Middle Way, which emphasizes balance in all things, gross national happiness is about pursuing a less materialistic path to modernization, through which psychological well-being matters as much if not more than economic prosperity.

And as writer/director Pawo Choyning Dorji lays out in “Lunana,” one key area of happiness the Bhutanese government measures for this initiative is education, considered compulsory for citizens regardless of their location. It’s for this reason that Ugyen, with one year left on his teaching contract, is dispatched to the country’s most remote village. An aspiring musician who plans to leave Bhutan as soon as he’s able, Ugyen is less than thrilled about the assignment. But once his headphones run out of battery, he starts to open up to the sounds of the environment around him, from the delicate strains of birdsong to the folk songs his yak-herder guides sing as they stroll.

Before reaching Lunana, Ugyen is met by the village’s population of 56, who hail him as a visiting dignitary. It soon becomes clear that this is exactly what he represents. “I have hope that you will give these children the education they need to become more than yak herders and cordyceps gatherers,” says Asha (Kunzang Wangdi), the village chief. Ugyen’s pupils are on the same page; bright-eyed Pem Zam, a non-professional from Lunana, plays the most enthusiastic of the bunch, proclaiming that teachers “touch the future” and gradually awakening Ugyen to the truth of this.

Of course, the remote village—the name of which translates literally to “dark valley”—poses its fair share of challenges. The schoolhouse is nothing more than a wooden hut with mud walls, and Ugyen’s accommodations are similarly spartan, offering scant protection from the glacial winds. And then there’s that yak. Taking up space in the classroom so as to stay warm in winter, his name is Norbu, which means “wish-fulfilling jewel” and suggests the role Ugyen plays in helping Lunana’s children toward realizing their dreams. (It’s also a likely nod to “The Cup” director Norbu, who employed Dorji as an assistant on 2013’s “Vara: A Blessing.”)

Without access to the Internet, cell phones, or even the modern comforts of electricity, Lunana comes as a shock to an urbanite like Ugyen, who wants to pack it in and head back home almost immediately. But it wouldn’t be much of a movie if he did, and Ugyen chooses to stay after the children make clear the earnestness of their desire for a real education in this rural outpost.

Dorji shot “Lunana” on location, relying on solar-powered batteries and enlisting local villagers to take on supporting roles. Such decisions enhance the film’s naturalism while deepening its often phenomenological sense of place; so too does Dorji’s manner of presenting the majestic Himalayan scenery in fixed-position long shots, which overlook the characters from a distance so as to more fully steep them in the splendor of their surroundings. Ugyen and a herder named Saldon (Kelden Lhamo Gurung) often sit side-by-side above Lunana, from a mountainside perch where she teaches him a folk song that honors the yaks for their many contributions to the villagers’ way of life: from their milk and meat to the dung they excrete, which serves as fuel for heat. In Lunana’s blissful silence, the villagers relish what they describe as a more holistic contentment, nourished by nature and mindful of their own presence as a daily gift they give themselves and one another.

Cheerful and heartwarming as this all is, it makes for a rather simplistic paean to gross national happiness; Ugyen even wears a shirt with the slogan written across its back. Still, the film’s main tension—if you can call it that, given the equanimity with which it’s addressed—concerns Ugyen’s willingness to surrender his own vision of happiness in favor of a more communal, interdependent variety. “Lunana” doesn’t exactly mock his dreams of pursuing fame and fortune as a musician in far-away Australia, though this imagined path to fulfillment is critiqued by nearly everyone he meets.

Dorji depicts Lunana’s traditional living so idyllically as to leave little doubt where his own allegiances lie. Music is as vital to the villagers as it is to Ugyen, whose friends eventually send his guitar along with teaching supplies. This sets up a joyful scene where Ugyen and the yak herders serenade the children, leading them in a circle dance that exalts the harmony Lunana has instilled in its people while showcasing the imposing mountain terrain that makes their sense of belonging here seem all the more profound and pure.

“Lunana: A Yak in the Classroom” is now playing at the IFC Center and available on streaming platforms. 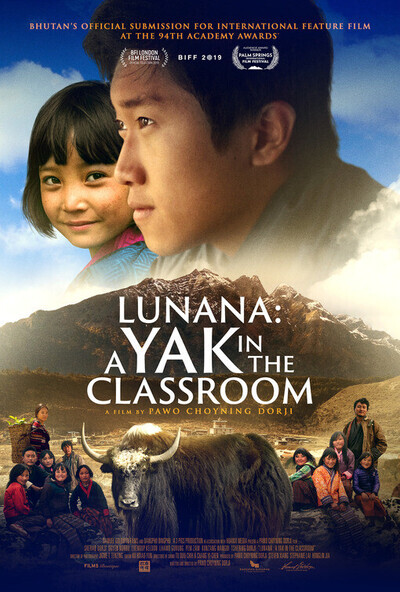