May Ryer (Brea Grant) is a self-help author whose book Go It Alone preaches self-reliance for women. Her mostly female fanbase ask her at book signings when they can expect a follow-up, but something's not right. May can't get started on her new book. This feeling of something being "off" is made perfectly clear when one night May spots a man outside the house she shares with her husband. The man appears to be trying to break in. When May, frantic, wakes up her husband Ted (Dhruv Uday Singh), Ted is more irritated by May's panic than concerned about the potential intruder. As he grabs a baseball bat to go fight off the unknown man, Ted tells her this happens every night. Every night, a man breaks into their house and tries to kill them. "This is just how things are," Ted says. May is shaken. She doesn't remember. But Ted is right. The next night, it happens again. And the next night. And the next night.

This is the unnerving premise of Natasha Kermani's "Lucky," written by Brea Grant (who also stars). What appears at first to be a typical home-invasion thriller is revealed as something much stranger, much more upsetting. "Lucky" is more than its premise. "Lucky" has something to say, and Grant has thought very deeply about the subjects of violence against women and trauma, as well as gender-based assumptions about these things. "Lucky" is told solely from May's confused insomniac point of view, and so the learning curve of the audience is the same as May's. May is slow to understand what is really going on, even though everyone around her—her husband, her assistant Edie (Yasmine Al-Bustami), her sister-in-law (Kausar Mohammed) and her editor (Leith M. Burke)—seems to know what is happening and yet refuse to tell her.

This is a frustrating story-telling dynamic, depending as it does on repetition, of the same scenes playing out over and over again. The frustration serves a purpose, ultimately, as does the repetition, although it takes some patience to endure. May goes to people for help. They all treat her like she's over-reacting, but there's something else underneath their behavior. They act like they have a secret, the key to the puzzle, and they look on May's flailing about to make sense of it with a condescending pity. Poor May, she's the last to know what's really going on.

When Ted vanishes suddenly and May can't get a hold of him, she is left to "go it alone." People offer up their guest bedrooms to her, but she refuses. She stays in the house, and every night she fights with the intruder. The fights are often terrifying, gruesome, and bloody, but the next morning the cycle starts all over again, "Groundhog Day"-style, or, like 2017's "Happy Death Day," featuring a similar time-loop. May calls the police every time, but the response is infuriatingly casual.

"Lucky" indulges in all of the horror movie "tropes" but it does so with a purpose. May turns off all the lights at night, even though it would be helpful to see the intruder when he arrives. She even falls asleep! When the man appears, as he always does, instead of running outside, she runs upstairs, where there's no way out. It's like May has never seen a horror movie! But there is a method to Grant's madness as a screenwriter. This nightmare-come-to-life scenario takes on the aspect of one of those terrible dreams where you're being chased, and you try to run, but you can't move. May is like Josef K. in Kafka's The Trial, doing her best in a confusing threatening world, where everyone else seems to have gotten some mysterious memo about "the way things are," and she was left off "the list."

When the underlying truth finally shows itself, almost at the very end of the film, everything you've seen before shuffles into awful and angry clarity. The title, too, moves into focus, showing its thematic underpinnings, in the way titles can do with really good short stories.

Kermani balances the thrills and shocks with chilling moments of stillness, where May comes close to understanding what is happening. Pieces of china come out of the dishwasher with tiny cracks. A sliver of glass is found on the coffee table. The corner of a window pane shows a feathery crack across it. These small moments, left up to interpretation, add to the metaphorical power of "Lucky." It's almost like what May thinks of as her reality is actually the dream, and over the process of the film she actually wakes up. All the broken glass around her is the façade of her denial cracking apart. 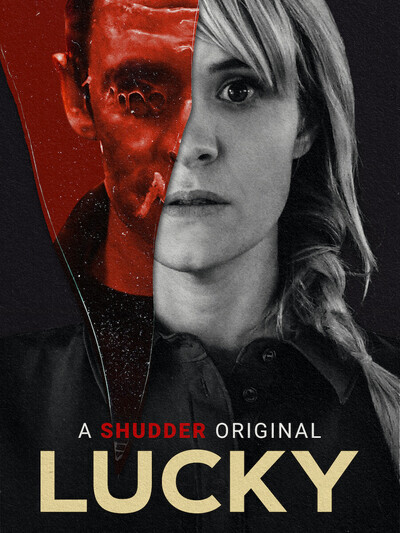 Brea Grant as May

Hunter C. Smith as The Man