“Lowlife” is the latest indie to hit theaters that Quentin Tarantino himself would describe as “Tarantino-esque.” To some of you, my usage of that term has already made you check to see if you can watch “Lowlife” within the next hour. But I can’t be the only one who is a bit queasy of more pulpy, cartoonish action figures from the underworld, coasting through a non-chronological story that yearns for equal coolness and ugliness with its bursts of violence. Not only is it a hard comparison to match with, given how much “Lowlife” owes to the likes of “Pulp Fiction” (which is a great movie), but it’s an incredibly tired influence with an endless amount of fellow copycats. “Lowlife” proves to have many of the same interests as Tarantino, but when it comes to originality, not so much.

The first character we meet in the sunny, bloody world of “Lowlife” is the underworld big dog Teddy (Mark Burnham), a Tony Clifton-looking type with even more grease. Below his fish taco spot he operates a grotesque business that includes dicing up illegal immigrants (who are dragged out of a local motel in the opening scene) and selling their organs. He also runs an underage prostitution ring. As you may surmise, “Lowlife” is a nasty movie, and this is just during the opening credits.

The other characters in this ensemble are less evil and a bit more morally complicated, but equally cartoonish. With respect to the script’s trickery, which dangled curiosity enough despite feeling so slow, I won’t spoil the story that eventually puts everyone in the same motel room. I’m not a monster.

First, there’s El Monstruo (Ricardo Adam Zarate), a locally revered Luchador who always wears his mask in tribute to his father, obsessed with the notion of legacy. But as violent as El Monstruo can be, he is emasculated by his comparably smaller size, and hopes that the son he will have with his wife Kaylee (Santana Dempsey) will be larger. His insecurity proves to be the character's most interesting attribute, less than the moments in which he screams before raging out on someone and ripping them to shreds, only to have the film cut away.

Meanwhile, in a motel not far off, a husband (Clayton Cardenas) needs a kidney, and his wife Crystal (Nicki Micheaux) agrees to use Teddy’s services. When they find out that someone they know closely is going to be the forced donor, the horrific nature of their plan overwhelms them. But for stubbornness that seems contrived beyond good business ethic, Teddy refuses to drop the deal.

Assigned with this task are two friends and former embezzlers: the amicable Keith (Shaye Ogbonna, dressed like he’s going to work) and ex-convict Randy (Jon Oswald, with a giant swastika on his face). Just as “Lowlife” details the fateful day from the other characters’ point of views, with storylines sometimes intersecting, it imbues us with the flat goings-on of these two friends catching up and then getting caught up in Teddy’s scheme.

Broken up into chapters with names like "Thugs" or "Fiends," "Lowlife" is a shallow exercise in nastiness, contriving different ways that people can be cruel to each other. This dark idea would sing much louder if the characters didn’t seem so mechanical, a facet further rubbed in by hammy performances. Even the innocent person whose fate drives the plot, and provides the life-or-death stakes that gets "Lowlife" to its gruesome ending, has the emotional value of a device.

Assembled by five credited writers, “Lowlife” works very hard to mix its many arcs together throughout their collectively wacky day; the acutely-plotted script's dialogue is more expositional than stylized as we learn what pains each character and how they're related. But the writers fall very short of making “Lowlife” particularly funny, in spite of the goofy malevolence at hand, and rely too much on bursts of violence (which are often cutaway from, in a redundant however economical filmmaking device) to get some edge. So even though “Lowlife” clearly wants to be clever, and features an ensemble that must cleared out a costume shop, the movie rarely pops.

Lacking a memorable quality aside from Kreng's rambunctious score and the visual detail that went into its blood ’n guts, “Lowlife” fails to have its own heart and soul. It’s obviously the work of a filmmaker who started out with someone else’s tried-and-true approach to storytelling, but didn't add their own distinct style. In turn, the stuff that does work or does seem original can’t shake off that Tarantino stench, and Prows gravely slacks on an element that has made his beloved Tarantino films so memorable: a dynamic sense of world-building. The cadavers are seriously very good, though. 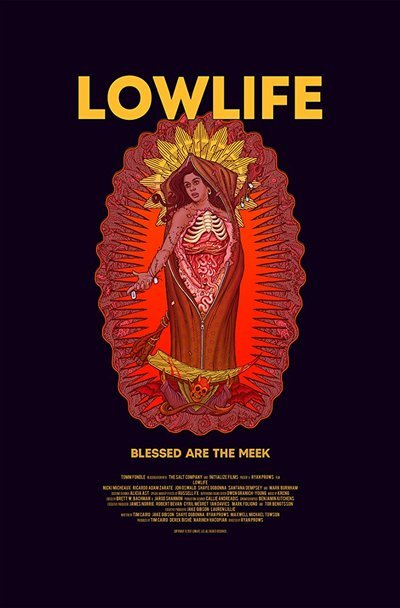