Generally, repetition is a great learning tool but a fraught narrative device. It can wear out its welcome, rendering its joke meaningless or only adding time to the length of a movie. There are, of course, some brilliant exceptions like “Groundhog Day” or “Russian Doll,” but Dean Craig’s “Love. Wedding. Repeat” is not one of them. Our characters here are not so much stuck in a time loop, as they are in a very lazy movie filled with cliches and middle school-level humor, and which starts over half-way through the events for no reason. The joke is on anyone who mistakes this movie for entertainment.

Written and directed by Craig, “Love. Wedding. Repeat” begins with an interrupted first kiss. Jack (Sam Claflin) and Dina (Olivia Munn) hit it off over the past few days during her visit to Italy, but just before he can make a move, an old friend of his interrupts and offers him an inopportune ride to the airport. Years later, on the day of Jack’s sister Hayley’s (Eleanor Tomlinson) wedding, they meet again by chance—and are also rudely interrupted by it. As the narrator billed as The Oracle (Penny Ryder) rambles on about love and chance, a group of kids wreaks havoc on the seating order of their table. Predictable chaos ensues as Jack is seated by his ex Amanda (Freida Pinto) and her new insecure beau Chaz (Allan Mustafa), Hayley’s reluctant maid of honor Bryan (Joel Fry) is seated by his filterless ex Rebecca (Aisling Bea), Dina is seated by a nightmare guest (Tim Key) who only talks about himself and a coke-addled former flame of Hayley’s, Marc (Jack Farthing), has crashed the party to ruin her big day. It falls on Jack to salvage the day and re-connect with Dina before it’s too late.

“Love. Wedding. Repeat” wants to have its cake and eat it, too. I can’t tell if the movie tried to skewer ridiculous rom-com conventions or make a failed replica, but the result is off-putting in any case. Whatever air of romance the Italian villa setting and cinematographer Hubert Taczanowski attempts to conjure up is ruined by just about everything else on screen. The crowded ensemble is rife with one-note, boorish characters who are much too clueless about human interaction to tolerate for copious amounts of time. Then, there’s the disembodied voice of The Oracle who makes us relive Hayley’s wedding day but with the table rearranged to give us a different outcome—for no discernible reason or explanation. No time loop, no rip in the space-time continuum, just because deus ex machina said so.

The movie focuses on the gaggle of insufferable English-speaking bridal guests, even though it's set in Italy and Hayley’s Italian husband’s family make up what looks like most of the party. (Maybe it’s a blessing in disguise that they’re marginalized and out of the picture.) So much of the banter, and even some of the narration, centers on dick jokes that are more sad attempts at humor than anything else. When explaining the role of chance in love, The Oracle says that chance can give love “a kick in the balls.” Dina’s unwanted party guest complains a handful of times about the state of his testicles under his kilt. Chaz is so insecure in his testy relationship with Amanda, that he engages Jack in a figurative dick measuring contest. I’m sorry to say, the attempts at humor do not improve.

Unfortunately, there’s also a half-hearted attempt at what resembles slapstick humor and a familiar comedy cliche: accidentally giving the wrong person a strong sedative. That person (in both versions of the movie’s “Repeat” part) then gets to play out the physical repercussions of their mistakes, simply playing drugged, tumbling over themselves and slurring their words. Possibly the worst so-called bit in the movie is the recurring threat of Marc playing a coke-fueled Pepé Le Pew type who won’t take no for an answer, effectively harassing and somewhat blackmailing Hayley on her wedding day. These are the most cringe-worthy scenes in a sea of feel-bad moments.

The best thing that can be said about “Love. Repeat. Wedding” is that it hates both genders equally. Nobody knows how to communicate with one another, which is weird to watch many adults fumble the simplest conversations. For instance, even as Chaz can’t stop comparing himself to Jack, his fiancee Amanda yells at him, scolds him and never seems to treat him with much kindness. It’s hard to even feel for the main characters when the entire movie could have been avoided if Jack had asked Dina for her number back in the day. You could revisit the 2012 French romantic comedy, “Plan de Table” instead of its English-language remake, but maybe that’s too much repetition for one day. 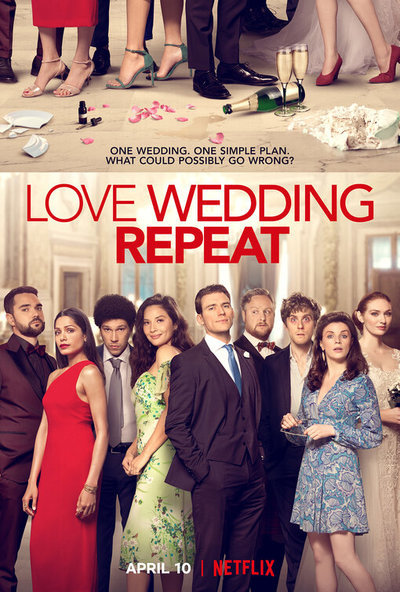 Writer (based upon the motion picture "Plan de table" by)