"Love, Simon" is a mainstream-styled teenage rom-com that uses every cliche in the book. There's the nerdy Vice Principal, the bacchanalian high school party, supportive yet somewhat clueless parents, witty voiceover from the protagonist, public declarations of love in front of the whole school, all held together by a stream of catchy pop tunes. But "Love, Simon"'s use of these cliches represents a huge first, because it is the story of a young closeted gay kid's difficult and often humorous march towards coming out. Director Greg Berlanti, who has helmed a string of hit television shows as producer and writer, uses the familiar teenage romance genre to tell an LGBTQ story, and in so doing makes these tropes feel fresh, fun, entertaining. Based on Becky Albertalli's YA novel Simon vs. the Homo Sapiens Agenda, "Love, Simon" is a radically inclusive act.

As Simon (Nick Robinson) tells us in his opening voiceover, he lives a normal life "just like you." He lives in a nice house, has two supportive parents (Jennifer Garner and Josh Duhamel) and a young sister obsessed with "Top Chef" (Talitha Eliana Bateman). He's a good student and participates in the Drama Club. His best friends are Leah (Katherine Langford), Nick (Jorge Lendeborg Jr.) and Abby (Alexandra Shipp). Nothing is wrong, except, as Simon says in voiceover, "I have a huge-ass secret." His secret is he is gay. He is pretty sure his parents would be fine with it and his friends would be okay too. He is afraid, instead, of how it will change everything, how people might perceive him differently. He also resents having to "come out" at all (which leads to a very funny sequence imagining kids having to come out as heterosexual to their devastated sobbing parents). Why is "straight the default," he asks.

When someone with the alias "Blue" writes a post on a popular local message board about being afraid to come out as gay, Simon reaches out privately, using the alias "Jacques." The two kids start a correspondence, hesitant at first and then increasing in intensity. The identity of "Blue" is the cliffhanger of "Love, Simon," and Berlanti has a lot of fun keeping us in suspense. There are many potential candidates, and as Simon drifts from one to the other, wondering, "Are you Blue? Are you?" It could be any one of them. One of the beautiful aspects of "Love, Simon" is that the intimacy blossoming between the two characters is based on how much they come to care about each other, how much they support one another's journey. The romantic feelings come out of a soul and heart connection.

Things get weird when fellow Drama Club member Martin (Logan Miller) enters the scene. He finds out about Simon's secret correspondence and blackmails Simon into helping him get a date with Abby, who wants nothing to do with him. Simon becomes a reluctant hidden puppeteer of the ever-shifting extremely-fraught landscape of various high school romances involving Leah, Nick and Abby, people who are supposed to be his best friends. His manipulations lead to enormous confusion, hurt feelings, emotional chaos, with Simon rationalizing it all to himself as doing what he has to do to protect Blue's identity. If Martin reveals the correspondence to the school, as he threatens to do, then Blue will be scared away for good. The stakes could not be higher.

Berlanti, who brought us "Dawson's Creek" and "Riverdale," knows this teenage territory extremely well. He understands teen neuroses, and cares about teenage experience, its intensities, its depths, how important romance is to the teenage kids engaged in it. There's one scene where Leah shares with Simon how she always feels like she's on the outside looking in. She says, in one of the many wonderful lines in the film, "I am the kind of person destined to care so much about one person it'll nearly kill me." This is how sensitive smart teenagers talk. Screenwriters Elizabeth Berger and Isaac Aptaker (whose shared credits include "This Is Us" and "About a Boy") have a great ear for the undulating rhythms of comedy and pathos. "Love, Simon" is filled with humor—in its characters, dialogue, and situations—but it doesn't sacrifice emotional depth. The two work in tandem.

Historically, "coming out" stories in the movies have involved their own kinds of cliches: torment, tragedy, parental/societal rage, fear of disease, and sometimes even death. Such films underline the perils of living in a homophobic world, of being "out" in an atmosphere not just unwelcoming but deadly. These stories are important ones too, and have been breakthroughs in representation. But in mainstream films, playing in a Multplex, the gay characters are still more often than not sidekicks to the hetero leads. Recent films like "Call Me by Your Name," and "Blue is the Warmest Color" show characters who are not punished for their sexuality by the world, their parents, their peers, and these films are huge steps forward. But "Love, Simon" is a mainstream film for teenagers.

I did not see the movie at a press screening surrounded by critics. I went to an audience preview, and the excitement as the lights dimmed was palpable. I noticed no surreptitious checking of cell phones during the film, only an energy of complete engagement. People were talking back to the screen or gasping in sympathy or howling with laughter. When Simon's anonymous crush finally revealed his identity, the audience erupted into screams and applause. There was a feeling of cathartic release in the theatre, unique in my experience, especially with teenage rom-com fare.

In one poignant scene, Simon's mother says to him, "You can exhale now, Simon." That's what I sensed in the screening of “Love, Simon," and that's what the film is. A long overdue exhale. 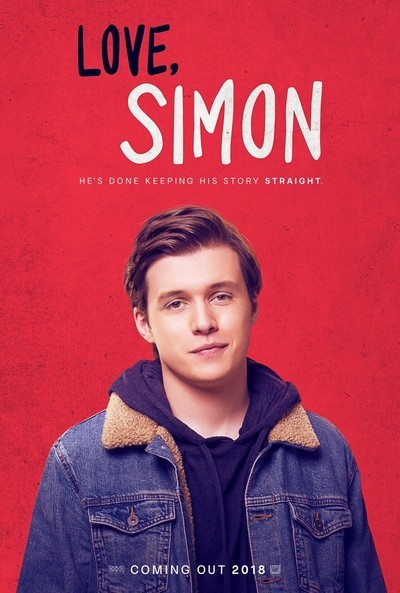