"Louis Armstrong's Black & Blues" reflects on the life and art of the legendary performer by delving into his records—not just all the ones he recorded on vinyl. Director Sacha Jenkins ("Everything's Gonna Be All White") was given access to the Armstrong estate's collected materials, which includes decades' worth of news clippings, reviews, and photographs; never-before-heard recordings of conversations that Armstrong made whenever friends and colleagues visited his modest home in Queens, New York; and most strikingly, scrapbooks of collages Armstrong made from his own materials.

The latter seem to have provided Jenkins with the template for this movie. "Black & Blues" is essentially a filmmaker's cinematic scrapbook about Louis Armstrong. He helped found and evolve jazz and break through racist barriers that had previously stopped Black performers from attaining crossover success. But Armstrong was also dogged throughout his life by accusations that he was too measured and safe in his public persona during an American century in which many other prominent performers risked their careers by taking outspoken public stands on civil rights. Wynton Marsalis, one of many commentators, admits that as a young man he rejected Armstrong's music out-of-hand because he had a perception that he was guilty of "Uncle Tomism"—an opinion he retracted after studying his virtuoso technique and learning more about his life.

Armstrong was caught in a bind. He was a dedicated supporter of civil rights in private. He donated money to causes and participated in fundraisers, and you hear him on the tapes and in late-in-life TV interviews talking about his experiences with racism. But for the most part, he either kept his opinions on those and other hot-button subjects to himself during press interviews or expressed them in a droll, read-between-the-lines sort of way. He avoided civil rights marches because, as he reasoned, getting his teeth knocked out by a cop would ultimately be a net loss for the same folks who counted on him for funding. The movie leaves it up to us to parse the complex moral calculus involved, while subtly reminding us that only an artist of prominence is ever placed in such a position. It's retroactive armchair-quarterbacking to confidently state what Armstrong should have done.

"Black & Blues" weaves in the expected film and video clips of Armstrong performing, being interviewed, and appearing at various public events and with icons from different walks of life. And there are plenty of examples of standard historical documentary techniques that seemed dazzlingly new once but have become commonplace (such as separating the people in photographs from their backgrounds to create the illusion of depth).

But much of the film feels bracingly new and personal. It often seems to be assembling itself spontaneously before your eyes, by having cut-out words from magazines appear over photographs in sync with audio taken from Armstrong's private interview tapes and other sources. The resulting images often appear to have been mounted in scrapbooks. It's unclear if Armstrong's actual collages are being reproduced or if we're (sometimes) seeing directorial flourishes or inventions (as when Armstrong tells a story and we see figures representing the participants seem to come sort-of to life, like very early animated movies or flip books).

A major part of Armstrong's success came from his uncanny knack for seeming to find the rainbow in every cloud. (His last chart-topper, and one of his biggest successes, was "What a Wonderful World.") Think of him singing or speaking, and you picture him smiling or laughing. But those laughs and smiles were multilayered, sometimes calculated, and always imbued with secondary associations that eluded the general public but were crystal clear to Armstrong's family, partners, and close friends.

The most revelatory and thrilling parts of the film are the sections where we get to hear Armstrong and his friends on tape, talking the way prominent artists and entertainers do when cameras aren't on them and nobody in the room is looking for a "gotcha" quote. Armstrong was a great storyteller no matter what venue he was in, but it's a special kick to hear him telling bawdy stories about his childhood in New Orleans and cutting loose with four- and twelve-letter profanities (which are as musical in his delivery as any phrase he blew on his horn).

There's a wonderful quote from Marsalis here appreciating Armstrong's rendition of "The Star-Spangled Banner"—a song that's an emotional and intellectual minefield for Americans who were never truly welcome in their own country—and comparing it to Jimi Hendrix's version. Marsalis concludes that Armstrong simultaneously complicated and purified the song, transmitting complex feelings to the listener through pure technique. Reclaimed it, in a way. (Another anecdote finds James Baldwin hearing Armstrong perform the anthem, then saying that it was the first time he'd ever liked the song.)

The film takes a serpentine (and sometimes figure-eight) path through its subject's life and output, using its "collage" identity to go places you might not expect. But it also sometimes leaves specific topics or period in Armstrong's career sooner than the viewer might wish, and jumps around in time so matter-of-factly that sometimes it's hard to immediately discern where we are in his story.

And yet those are all features of the film's style, not bugs. This is not a traditional "and then he went there, and then he did this" movie. It's biographical jazz that permits digressions and gives itself the freedom to jump around as it pleases. If "Black & Blues" returns to the same melody a few too many times, it doesn't diminish the overall achievement, which feels free in a way that these sorts of films rarely do. 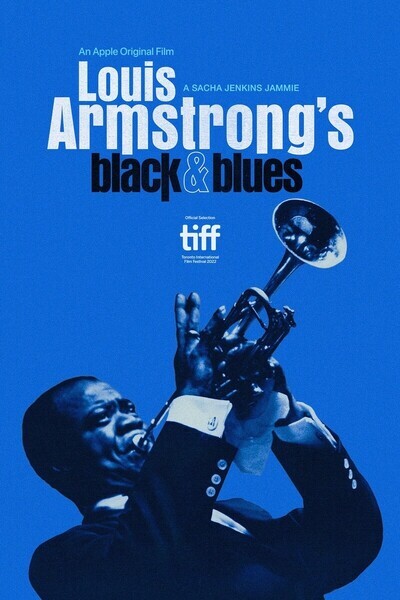 Louis Armstrong as Self (archive footage)

Wynton Marsalis as Self