Xu Lang, a stiff corporate executive with shaved head, pressed shirt, and shiny silver briefcase, has invented a chemical that enhances fossil fuels. Add a few drops of this “Supergas” to a quarter cup of oil, and the oil expands to fill its container. Now, he heads from China to Thailand to find his boss and get approval to further develop and market his miracle compound. Because this is a screwball comedy, his polished veneer will fall away as he's pushed to his wits' end.

Xu (played by director Xu Zheng) faces opposition from a smarmy, black-clad corporate rival named Gao (Huang Bo), with giant hipster glasses and alternative rock hairstyle, who wants to sell Supergas to the French. Meanwhile, Xu's dedication to work has ruined his family life. His wife wants to leave him, his grade-school daughter hates him, and he has only two days before he must return to China for divorce proceedings.

Xu's trip is plagued with technical problems that prevent him from finding his boss’ exact location. For most of the film, he only knows that his boss is on a retreat in a Buddhist temple. In Thailand, where there are thousands of such temples. Gao, however, manages to remain on Xu’s tail because of a large GPS tracker he plants in Xu’s cell phone. With access to such technology, you'd think Xu could contact his secretary back in China and get his administrator’s location, but that would be too reasonable for this movie.

These elements could make for a strong dramatic movie. That is, until Xu gets on the plane and meets Wang Bao (Wang Baoqiang), a buffoon with a bleached bowl haircut and a big heart, who manages to ruin every moment of hope with his simple-minded mishaps. Wang Bao carries a cactus, a camera, a bucket list of activities, a travel diary, and a photo of his “wife,” Chinese superstar Fan Bingbing, clipped from the newspaper. He speaks with love about his mother’s life lessons, though she seems have nothing profound to say.

He is also a Thai kickboxer, with only one move: a devastating vertical kick that he can perform only from a platform. If that is not enough, he also has a recipe for onion pancakes. And, yes, every one of these tools finds their use (or misuse) in this film. And, yes, Wang Bao keeps dropping in on Xu, sometimes fortuitously, and sometimes disasterously. "Lost in Thailand" suggests the heart of “Planes, Trains and Automobiles" amid madcap moments that recall something between Mr. Bean and Jackie Chan. Wang Bao is John Candy to Xu's Steve Martin.

As Xu and Bao travel through Thailand, the film offers cultural depictions we might expect from similar American movies. Thailand is shown as a lush land of green trees and thick raindrops. But, the Thai people themselves serve only as an anonymous backdrop for the foreground hysterics.

The film also traffics in some of the common stereotypes of Southeast Asia, including swarthy gang members carrying machetes and East Asian women tossing themselves as sexual playthings for Westerners. Still, it manages to make absurd jokes out of these clichés. More than that, the film offers glimpses of things not often seen in movies, including Songkran, Thailand’s New Year’s celebration. Of course, this water-splashing festival mainly provides setups for humor.

The story gets increasingly preposterous as it unfolds, and half the jokes are predictable. Many comedies fall short, putting wit on hold to fulfill the necessities of plot. Here, however, plot simply provides a destination and a deadline. This film races with such high energy that the humor continues to satisfy, if only because the characters are so likeable.

The gags are almost entirely physical, but the emotions are universal. From the start, it is clear that Xu will face dual crises of conscience -- over the tug-of-war between his career ambitions and his family’s needs, and his frustration with the annoying, yet sympathetic Wang Bao.

“Lost in Thailand” is China’s all-time biggest box office moneymaker, second only to “Avatar.” Some attribute its success to the escapism it offers to young people locked into a corporate life. In the screening I attended, on a wet wintery weeknight, the audience roared with laughter. A February release in America, this is the kind of movie to watch to escape the doldrums. In any case, "Lost in Thailand" should soon attract a global audience, and I expect an American remake will soon appear on the horizon. 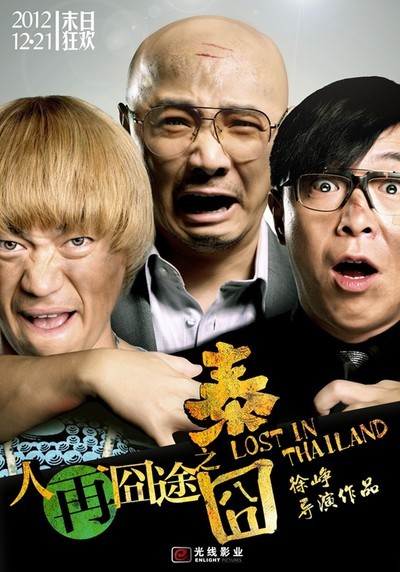 Fan Bingbing as Herself