The thing about The Grateful Dead is, if you tell some stranger that there’s a new four-hour documentary about the band, he or she is likely to respond, “Of course there is.” The legendary band is legendary in part for its devotion to duration. Long concerts, long jams on songs, a long time on the road. This documentary’s title, “Long Strange Trip” comes from “Truckin’,” a song from its 1970 album American Beauty. The band was only five years old at the time, although its ostensible leader, guitarist Jerry Garcia, had been gigging professionally since 1961. But the trip was going to get longer and stranger, grinding to a halt a quarter of a century after “Truckin’,” with the 1995 death of Garcia.

There have been challengingly long docs about classic rock bands in recent years. 2007’s “Runnin’ Down A Dream,” directed by Peter Bogdanovich, chronicled Tom Petty and the Heartbreakers and justified its length by dint of Petty’s talents as a raconteur. Alison Ellwood's not-quite-four-hour 2013 “History of the Eagles” could fly with the alternate title “Blazing Egos.”

But of all the bands that might be considered for a gargantuan length film treatment, The Grateful Dead’s scale of achievement and actual profound cultural influence make them arguably second only to The Beatles with respect to deserving such a treatment. And this movie, directed by Amir Bar-Lev, makes every minute count.

The movie is separated into six “acts.” In terms of how it looks and feels, it isn’t too different from a lot of historical documentaries. There are many talking heads, and a lot of archival footage. Rhythm guitarist Bob Weir, once the fresh-faced baby of the group, is now ruggedly white-bearded and sits in the lotus position throughout his interview. For guys who didn’t much like posing for photos, there’s a lot of good imagery both still and moving. The sound mix of the music is superb. But the movie has virtues beyond mere ultra-competence. The six-act structure is more thematic than chronologically linear. This is not an “and then X joined the band” or an “and then I wrote” or an “and then we made our difficult sophomore album” kind of account. Percussionist Mickey Hart’s several-year hiatus from the band (a parental intervention, if I recall correctly) doesn’t come up. Tom Constanten, a keyboardist for the group in its earliest heyday, isn’t mentioned or interviewed. What the viewer gets instead is a series of incredibly involving mini-movies, the first starring Barbara Meier, who was Jerry Garcia’s girlfriend in the early ‘60s and came back into his life after a long absence in the early 1990s, most fatefully as it happens. Garcia himself is at his most eloquent in interview footage from late in his life, articulating how the improvisational approach the Dead brought to its music was informed by bluegrass more than jazz: “Bluegrass is a conversational music; the instruments talk to each other.” Already an accomplished guitarist in the early ‘60s, he went a little nuts when he discovered the banjo, practicing obsessively.

As the psychedelic ‘60s emerge and evolve, the use of LSD dissolves egos within the band initially called “The Warlocks,” and inform the communal ethos that defines the Dead’s early lifestyle and its music. The movie takes the intimations of the cosmic in the music seriously. Around the point Ron “Pigpen” McKernan, the bluesman who was often the odd man out in the Dead’s furthest-out excursions, dies of cirrhosis of the liver in 1973, characteristically blunt former road manager Sam Cutler observes, “Alcoholics don’t like acid; they’re trying to shut down the doors of perception, not open them.” The band’s opening of doors extended into aural realms, with their audio engineer (and legendary acid mixer) Owsley “Bear” Stanley building a mind-blowing and increasingly impractical PA system called the “wall of sound.” You have to see it to believe it.

These multivalent tales of the Dead are awe-inspiring and thought-provoking without fail. As is the section late in the movie, about the obsessive quests of Dead fans, one of whom includes U.S. Senator Al Franken. But what starts off inspiring becomes dispiriting. The Deadhead caravan morphs into a tentacled unruly monster. Garcia, ostensibly the group leader, is such an genuine philosophical anarchist he refuses to condemn anti-social fan behavior just as he refused to bar Hell’s Angels from the backstage areas that often included whole families. (I was reminded of Vincent Cassel’s Otto Gross in David Cronenberg and Christopher Hampton’s 2011 “A Dangerous Method,” who shrugs “Freedom is freedom” when confronted with objections to his arguably damaging behavior.) And eventually Garcia falls victim to his own version of the Pagliacci joke: the engine behind a musical invention that brings joy to millions becomes depressed by the fact that he doesn’t have his own Grateful Dead. Diabetes and heroin only make matters worse.

As sad as Garcia’s end is, “Long Strange Trip” remains an exhilarating and inspiring movie. For a not inconsiderable period, Garcia, Weir, Hart, Phil Lesh, Bill Kreutzmann and various fellow travelers saw the possibilities that their talents and the times offered them, and made hay of them. I enjoy too many different kinds of music to become a true Deadhead—comparing all those concert tapes looks like a lot of work!—but I think the band was pretty great, and this wonderful movie has thrown me down a Dead rabbit hole that I’m going to be happy to poke around in for quite a while. 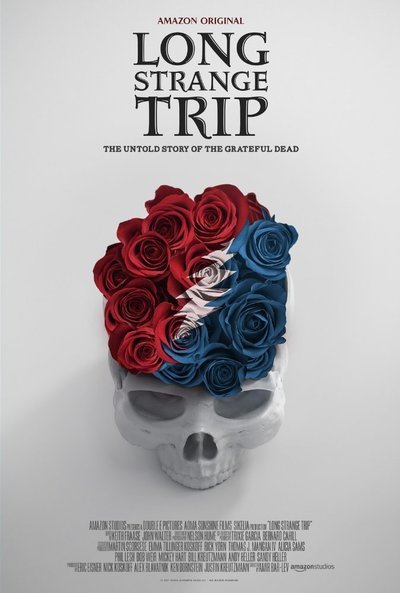 Jerry Garcia as Himself (Archive Footage)

Bob Weir as Himself

Mickey Hart as Himself

Bill Kreutzmann as Himself

Phil Lesh as Himself

Ron McKernan as Himself (Archive Footage)

Brent Mydland as Himself

Brent Mydland as Himself (Archive Footage)

Donna Godchaux as Herself (Archive Footage)

Keith Godchaux as Himself (Archive Footage)

Vince Welnick as Himself (Archive Footage)

Tom Constanten as Himself (Archive Footage)

Robert Hunter as Himself (Archive Footage)