2020 might have been the year of permanently tempering expectations, but movies like "Locked Down,” at least from the onset, make it hard to not get your hopes up. Its stars, Anne Hathaway and Chiwetel Ejiofor, are the type of actors whose energy could hold your attention in the most mundane of scenarios, even quarantine. So to be trapped in a lockdown with them, to watch them embody relatable circumstances through feverish monologues, and then join them on a story that promises a department store heist sounds like the escapist dreams Hollywood is made of. And then factor in screenwriter Steven Knight, because if anyone could make these restrictions work, it would be the writer/director of the incredible “Locke,” in which Tom Hardy sat in a car seat and navigated the worst day of his life phone call after phone call.

But in spite of the available chemistry and charisma from Hathaway and Ejiofor, “Locked Down” proves to be a bewildering mess, in part because of choices made in how to tell a story that mixes two-hander drama with a heist. The creative limits aren’t even due to the pandemic, but from Knight and director Doug Liman who make this story more stagnant than it has to be.

"Locked Down" begins in cloudy, tense circumstances, expressing the bitter mix of introspection and grief that we now know to be part of quarantine. Linda (Hathaway) and Paxton (Ejiofor) are bound to break up once this hellish lockdown is over; two more weeks and the London-based couple will get off of each other's nerves. Their relationship started with wild motorcycle rides years ago, and was put on an emotional downward slope when the well-read and aggressive Paxton was arrested for beating up someone in self-defense. Since then, their relationship has become a collection of spite conversations and sad, private actions. Paxton wants to sell the motorcycle, and Linda hasn’t even told her co-workers about the relationship. The lockdown has made them even more tense, especially as Linda deals with ugly work drama over Zoom calls, realizing how much her corporate job is a total soul-suck.

For the movie's first two acts, Hathaway and Ejiofor both give manic performances that are befitting of the period. As Linda and Paxton clash, they basically volley wild monologues that detail their neuroses about their growing distaste for themselves and each other, indirectly showing how these estranged lovers would be perfect for one another if they could just see eye to eye once again. The acting is over the top, as if Liman is letting the pandemic inspire the blocking, having them pace around and end their anxious rants on a fever pitch. It can be a compelling however campy display, like when Hathaway vents at warp speed, with self-effacing murmurs in between, about a pre-COVID business trip where she had to face herself in the mirror and did not like what she saw. The monologues can be so stagey that you half expect the two to burst into song—to do something so equally high-energy—so you feel the sinking weight even more when the film reverts back to Zoom calls that drag out the already convoluted plot.

Ejiofor goes against his type of usually holding a kind of wisdom—it’s striking to see him so antsy, so disheveled, so willfully annoying. There’s a compelling smallness to him as well, especially in playing this character who blames his actions from ten years ago to damning who he is now, a subplot that Ejiofor can only do so much with. But he has bursts of freedom, running outside and reading poems by T.S. Eliot and D.H. Lawrence off his phone to his neighbors, his “fellow inmates.” Sometimes the film’s non-Zoom handheld cinematography simply beholds him as he does this, looking up at this quarantined madman as if the words were his own interior monologue.

Knight has to give his “Scenes from a Quarantine” script a third act, so a heist plot comes to fruition mixing their two jobs. She works for the company who oversees the diamond on display at Harrods, and he has found a gig as a driver hired to transport one that costs three million pounds, albeit using a new name because of his criminal past. Paxton and Linda remark about this overlap, saying it's like an intervention of God, fate, chance, etc. But really it’s just gibberish plotting, leading to one of the more weaker heists in movie history, and not in disarming, sly fashion. You wish that Knight and Liman had tried harder with everything, or at least with the jokes, like a quagmire that arises when Paxton’s new name is revealed to be “Edgar Allen Poe.” Even calling it a heist makes it sound more thrilling than it is, and to even share the scheme would be to take away what few thrills “Locked Down” has. It’s a real test of what you want from your heists, and the people behind them.

Knight takes the opportunity of a lockdown heist to charm with some subversiveness, and it hardly works. Usually when there’s a heist, it comes with blood-pumping anxiety of getting caught, a thrill directly eschewed here with a shrug. And usually a heist is more about craftiness, from the thieves and even more cunning storytellers guiding them, but this is more about a stroll through a massive department store. The one interesting subversion is about chemistry—plotting it as one last intimate act between separating partners is a different approach, basing the tension between two thieves not in a “Thomas Crown Affair”-like lust, but a degree of disgust that could just maybe revert them back to the thrills that originally bonded them. Credit to Hathaway’s performance in particular, she constantly challenges our certainty about what she wants in the end, while keeping on Linda’s emotional armor.

The heist becomes like an extension of the movie’s cynical allotment for entertainment—that the movie for some reason has to be almost two hours, so here’s some character-padding over the course of some Zoom sessions, with brief cameos from Ben Stiller and Mindy Kaling as Linda’s co-workers to make you think this is more of a party than the actions reveal it to be. “Locked Down” in turn exemplifies this new era of Zoom-based acting can be a raw deal between actors and audience—we get to see faces that we like, talents who make us laugh, and they just have to Zoom in with characters who feel like mere impressions. Like how the growing business of Cameos works, the actors get paid for popping in with their personas, and we get the simple novelty of getting to feel like we’re sharing screen-time with Ben Stiller (“Ooh, maybe that’s his real living room!”). Even Ben Kingsley appears as the man who helps get Paxton his new name, and the funniest detail might be how he always holds his device so that you only see half of his bald head.

Take out the film’s star presence, brief and not so brief, and you barely have a worthwhile movie, and one that seems like it’s already outdated. It has hallmarks that are major spring 2020 energy: jokes about making bread, the beginnings of mask-wearing, the dread of learning that you’re in lockdown for another blob of time. “Locked Down” is a wannabe pioneer of COVID-era filmmaking, but it feels old hat compared to other movies that have already come out and used Zoom performances and select outdoor scenes. It’s like a time capsule that’s been opened too early, the movie’s simple references to real anxieties not providing any comfort but an easy recognition.

“Locked Down” proves to have a warped idea of escapism, its easygoing approach undermining all of the good things going for it. Under such restrictions, the film is certainly of the lockdown mentality of making do with what is physically available. But when sharing the screen with the promise from such grandiose talent, the little things we are meant to savor feel especially small.

Available on HBO Max on January 14. 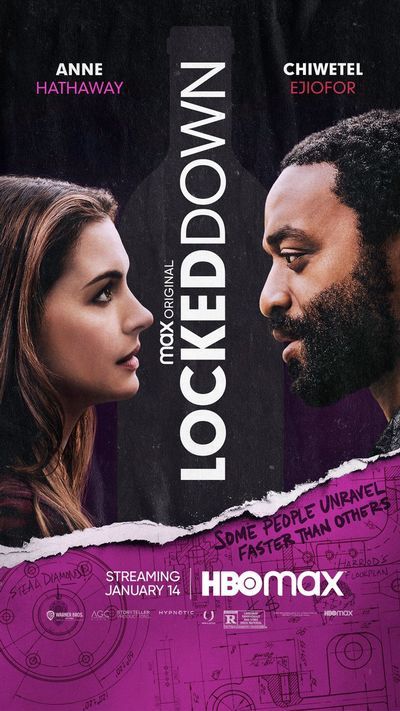