The sky is often caught in the midst of a turbulent storm. Lightning cuts through the darkness. Waves crash violently on the rocky shore. Characters turn their eyes to the gray clouds above as if searching for answers to solve the problems in which they’re mired. In "Live Cargo," director/co-writer Logan Sandler strives to tell a story that finds poetry in the commonplace by shirking narrative conventions. The emotional turmoil these people struggle to navigate is clear because they seem incapable of cracking a smile and are often on the verge of tears. But despite the care put into the story and its heavy themes, “Live Cargo” has no emotional impact.

The film opens on a tragic day in the lives of a young couple, Nadine (Dree Hemingway) and Lewis (Lakeith Stanfield), as their first child is stillborn. Sandler and co-writer Thymaya Payne choose not to explain the particulars of this calamity. Instead the tense gazes of the actors, flickering fluorescent lights of the hospital, and unmoving child in Nadine’s arms work to create a depressive mood that comes to define the entire film. Nadine and Lewis try to heal by going to a small Bahamian island on which Nadine’s family has property. She obviously has deep history here, finding occasional comfort in father-like figure Roy (Robert Wisdom) and swimming in the ocean with impressive skill. She easily finds the rhythm of this place while Lewis struggles to find his own equilibrium.

There is little solace to be found as the cracks within their relationship start multiplying. Meanwhile, Myron (Sam Dillon) struggles with homelessness and in desperation gets caught up in the dealings of a local criminal involved in human trafficking named Doughboy (Leonard Earle Howze). The filmmakers make a lot of effort to avoid treating the black residents of the island as empty caricatures or vessels for uplifting platitudes meant to assuage the leads. The music, culture and cuisine of the island is authentically rendered. The strongest aspect of the film is the cinematography by Daniella Nowitz, it's black-and-white images lending a painterly quality to the narrative that at times makes “Live Cargo” seem mythic. This subverts any expectations when it comes to stories taking place in the Bahamas. There’s no pastel or neon color palette. But this rich imagery can’t conceal that there is no emotion to be found in this story. How can a film that touches on child loss, yearning to belong, murder, and human trafficking be so hollow?

It’s clear Sandler and his collaborators are fans of Michelangelo Antonioni. More than once I thought of the molasses-slow pace and the melancholy of "L’Eclisse." Unfortunately, the filmmakers confuse a lack of dialogue with verisimilitude and the actors casting sorrowful faces as having a perspective on human emotion. The film is as beautiful and thin as a cleverly-photographed postcard.

The actors are definitely dedicated to their roles. But what causes “Live Cargo” to falter is that Dree Hemingway and Lakeith Stanfield have no chemistry; not once is there a sense that these two people share a profound history. Stanfield has proven to be a compelling actor with recent fare like "Atlanta," "Get Out" and "Miles Ahead," so it's surprising just how miscalculated his performance feels here. In trying to communicate the sorrow that is weighing Lewis down and warping his marriage, he pushes too hard, making the character come across as apathetic. Hemingway has neither the fierceness nor complexity necessary to fill in the blanks that the filmmakers don’t consider about a woman who lost her first child. There’s also a queasiness to the sexual dynamic between Lewis and Nadine that isn’t addressed. Each time he tries to have sex, she recoils. Lewis doesn’t consider how Nadine may not be ready to have another child or comfortable initiating their sex life again. But her perspective isn’t fleshed out and his desire isn’t taken to task. There is no emotional arc or complexity to these people, which undercuts whatever power the carefully crafted imagery occasionally taps into.

“Live Cargo” does tip into somewhat offensive territory by never considering or exploring the humanity of the trafficking victims. They are merely a vehicle to solve the problems between Lewis and Nadine in a particularly ridiculous way for a narrative that makes a big show of feeling naturalistic. It seems the filmmakers, in trying to avoid an exploitative narrative, fell into the trap of not creating much of a narrative at all. The movie also curiously never considers the racial and cultural dynamics of the interracial relationship at its center or the optics of Nadine grinding on an anonymous black man at a club when her relationship with Lewis fractures further. Ultimately, "Live Cargo" is a film that confuses silence with great insight, beautiful imagery with emotion and the empty with the profound. 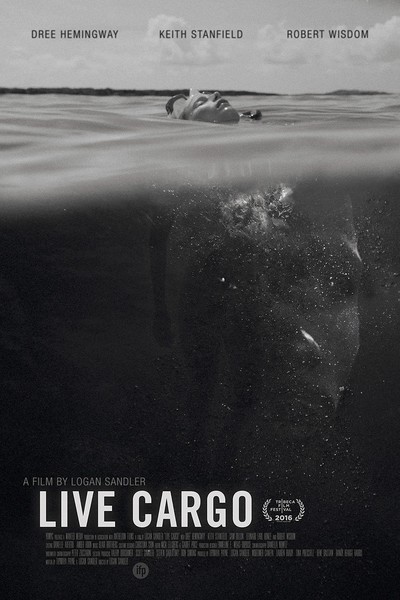