Some mediocre movies just don’t make sense; you can never understand why they went into production in the first place. The script was clearly a mess when someone bought it, it was never going to be profitable, and no one involved had the skill to pull it off. Why did they even bother?

“Live by Night” makes total sense. On paper, it seems like a can’t-fail proposition. Not only is director Ben Affleck coming off a Best Picture Oscar for his last directorial effort, “Argo,” but he started his already-impressive directorial career with an adaptation of a novel by the same author of the source material, Dennis Lehane, who not only penned “Gone Baby Gone” but “Mystic River,” “Shutter Island,” and others. The cast is talented from top to bottom, including Oscar winners and charismatic actresses to play opposite Affleck. The sprawling gangster story was given more than enough budget to pull it off, and even landed a release date that typically coincides with awards attention. So, the key question behind “Live by Night” isn’t so much “Why did they bother?” as “What went wrong?”

“Live by Night” is the story of the rise of a relatively low-level mobster named Joe Coughlin (Affleck) during Prohibition. Sorta. Kinda. We’ll get to how this epic story on the page lacked an interesting enough protagonist for the screen later. For now, know that Coughlin is on the rise in Boston, aided a bit by his cop father (Brendan Gleeson, great even in what amounts to basically a one-scene role) and in love with local mob boss Albert White’s (Robert Glenister) daughter Emma (Sienna Miller). After ripping off a few poker games, Joe decides he’s going to rob a bank and run away with Emma, but Albert gets wind of it and double crosses poor Joe, nearly killing him.

Coughlin runs to Florida, but he’s not done with the criminal underworld. In fact, he’s reporting back to White’s Italian nemesis, Maso Pescatore (Remo Girone), and essentially building an empire in Ybor, where he’s taken over the rum trade. In doing so, he meets a girl named Graciela (Zoe Saldana, who does a lot with a little) and comes to a gentleman’s agreement with local lawman Chief Figgis (Chris Cooper), who lets him do what he needs to as long as he stays in the right geographical boundaries. While in Florida, Coughlin runs afoul of the Ku Klux Klan, and meets Figgis’ daughter Loretta (Elle Fanning), who will play a major role in whether or not this Northerner builds a casino set to open just as Prohibition ends.

Crime epics—such as Lehane’s book—that cross state lines and years of plot require a confident hand with an artistic vision to guide them to the big screen. Affleck simply doesn’t seem to have much passion for the material. His previous directorial efforts displayed a sense of urgency that’s lacking here. Whatever faults you may find in his other three films, they had momentum, especially nail-biting works like “The Town” and “Argo.” “Live by Night” is almost stunningly momentum-less. It often plods from plot point to plot point. Some scenes go on far too long, especially in the final act when Affleck is trying to wring emotion from a script that doesn't have it, while others feel truncated in the editing room. The pacing is just off here, which keeps us from being engaged or immersed in the world.

Another key element that curtails immersion is a lack of grit. There’s no sweat or dirt in this world. Everything looks too finely tailored and the violence and sex lacks any sort of real pain or heat. It’s not as egregious as some recent dress-up movies (I’m looking at you, “American Pastoral”) but never once does it feel like we’re being transported in place or time. It’s a backlot with a costume budget and a design team who should have been told to scuff a floor or fray a hem here or there.

The real tragedy—and the reason my rating isn’t lower—is that there are moments and performances that work. Gleeson, Miller, Fanning, Saldana, Cooper—this is one heck of a cast that Affleck and his producers have assembled, and they find nice little notes to hit every now and then. It’s a movie with effective scenes and character choices, they’re just not linked together in any way that makes them entertaining or emotionally resonant as a whole.

Which brings us to the final and really the biggest problem of “Live by Night.” Lehane wrote an epic novel that includes Prohibition, Irish & Italian mobs, racism, religious fanaticism, addiction, and much more, taking place over years of American history. The film version doesn’t feel like it has any of that kind of ambitious scope. It is the story of a dude who got in a couple shoot-outs and made some money off rum, a footnote in the history of cinematic mob stories. Maybe the real question that no one ever answered should have been “Why should we care?” 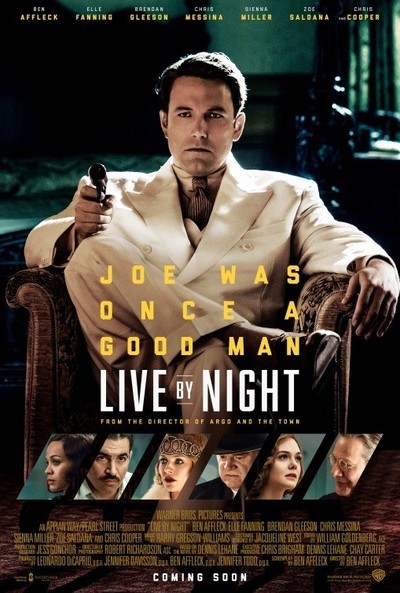 Rated R for strong violence, language throughout, and some sexuality/nudity.