Louisa May Alcott’s 150-year-old novel Little Women continues to be not just one of the most popular of all time, but one of the most influential, in part because its heroine, Jo March—fiercely loyal, impetuous, impatient, and a writer—is both eager and reluctant to find her own voice. Authors who name the book as a major influence range from Cynthia Ozick, Simone de Beauvoir, Doris Lessing, Margaret Atwood, Jane Smiley, Anne Tyler, Jhumpa Lahiri, Ursula Le Guin and Nora Ephron to "Twilight"'s Stephenie Meyer. My own mother, Josephine Baskin Minow, insisted on being called Jo after she read the book as a young girl, then followed her namesake and became a writer herself. And her grandchildren call her Marmee, because that is what the March girls called their mother.

There have already been many other versions of Alcott's semi-autobiographical story of four sisters, including a Broadway musical, a 48-chapter Japanese anime series, an opera, and films starring Katharine Hepburn, Elizabeth Taylor, and Winona Ryder. The most recent BBC version (of four) was shown earlier this year on PBS. The second major version this year is a modern-day retelling with a quartet of appealing young actresses, adapted with skill and understanding by writer/director Clare Niederpruem.

The advantage of many adaptations is that none have to replicate every page of the book. That leaves room for Niederpruem’s gently updated version, made with respect and affection, without any gimmicks. While Alcott’s March girls gathered around their mother to hear her read aloud their father’s latest letter, these March sisters gather in front of the computer to talk to their father, wearing desert fatigues, presumably calling in from Iraq.

Some of the most well known incidents of the book are omitted, which creates an opportunity to explore others less frequently included in adaptations. An early flashback is charming, when Marmee (a warm, wise Lea Thompson) puts a bill collector on hold so she can perform her part in the girls’ re-enactment of John Bunyan’s Pilgrim’s Progress. After all of the obstacles, and a sacrifice from each, they arrive in the attic to find their cardboard Castles in the Air, which they decorate with their dreams for the future. Niederpruem, a former actress and costume designer, has a good eye for detail, and the settings are engaging and perceptive.

We also see the meetings of the girls’ Pickwick Club, though its origin as a tribute to Charles Dickens is reflected only in the club members’ names. As in the book, the club puts on elaborate theatrical productions; unlike the book, this club also pays tribute to the girls’ father with military garb and chain of command.

Jo (performed with heart and spirit by Sarah Davenport) is an aspiring writer, outspoken, imaginative, and ambitious. She is dismissive of the dreams of her older sister, Meg (Melanie Stone) for a home and family. Beth (Allie Jennings) is the shy third sister, who loves music, and the youngest is Amy (Elise Jones, and later, as an adult, Taylor Murphy), an aspiring artist who dreams of being rich and beautiful. They meet the boy next door, Laurie Lawrence (Lucas Grabeel), an orphan who has come to live with his wealthy grandfather. He becomes a member of the club and a close friend, and then maybe more.

Fans of the book will appreciate the film’s faithfulness to some of its iconic moments: a Christmas breakfast with the poor, Jo burning Meg’s hair with a curling iron, Meg’s makeover for a friend’s party, Amy’s burning Jo’s notebook (there’s an almost-believable explanation for why Jo didn’t have a digital copy of her manuscript), and, most crucially, Jo’s growth as a writer, from post-apocalyptic zombie thrillers to writing from the heart about what really matters to her. She gets some guidance from Freddy (Ian Bohen), younger and more handsome than the middle-aged German professor of the book, but still there to challenge her to be her best self. “You are far more interesting than what you write,” he tells her. Learning that her own story matters is part of what makes it matter to us.

Fans should also appreciate the understanding of the book reflected in the updates, accomplished with delicacy. Jo still cuts off her hair, but for an even more poignant reason than in the novel. Purists will miss seeing all of the adventures and romantic details and object to the transformation of the crusty Mr. Lawrence and demanding Aunt March into the benign and cheery characters we see here. For devotees, the essence of the Little Women story remains, and, for newcomers, it is a sweet film that should inspire them to explore the book and the more traditional adaptations. It has a sad loss, a joyful reunion, a love story, a writer finding her voice, and one of the most endearing families in literature. 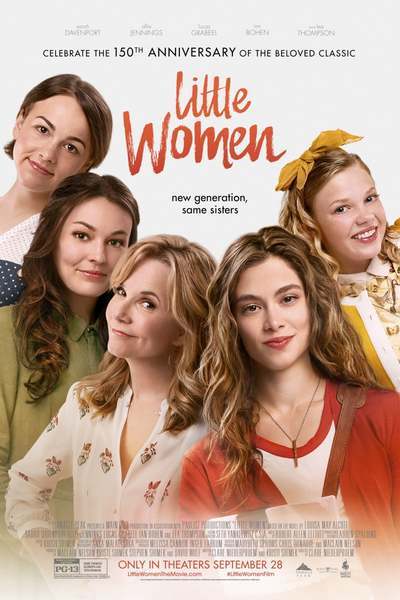 Rated PG-13 for some thematic elements and teen drinking.