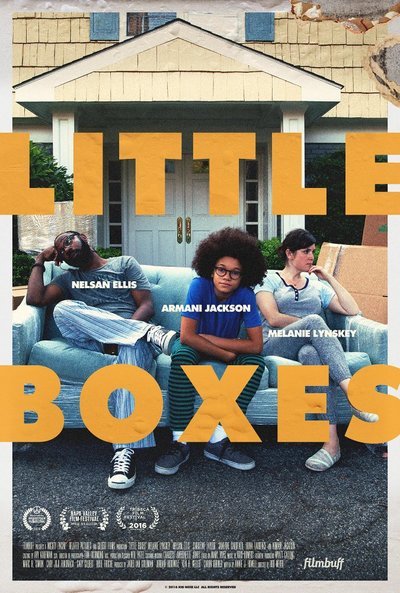 “Peyton Place,” “The Stepford Wives,” “The Amityville Horror,” “Poltergeist,” “American Beauty,” “The Ice Storm” and the complete works of John Updike. What do they all have in common? A sense of fear and loathing of that vast and insular wasteland known as suburbia.

“Little Boxes,” a modest comedy-drama that is super-eager to join that elite club but doesn’t quite meet all the membership requirements, at least exhibits a bit of audacity by borrowing its title from a popular anti-conformity folk ode from the early ‘60s that served TV’s “Weeds” so well for several seasons.

This ticky-tacky-ish spin on a much-trodden theme involves a likable though somewhat naive interracial couple (Melanie Lynskey and Nelsan Ellis) and their 11-year-old son (Armani Jackson, rocking a mushroom-like Afro) who leave the multitudinously diverse and intellectually stimulating environment afforded by Brooklyn for the lily-white small-town atmosphere of Rome, Wash., where photographer mom Gina has found a benefits-loaded teaching job at a college art department.

The opening images of Rome (whose welcome sign bears the slogan “Where Culture is Home!”) are edgily shot and edited like the start of a horror flick, complete with ambient sounds. Think Stars Hollow from “Gilmore Girls,” but without the kitschy local color, endearingly eccentric citizenry and fewer places to buy coffee.

Shortly after they arrive at their roomy new abode with its mature trees, spacious lawns, multiple bathrooms and lack of urban noise, annoyances begin to pile up. First, the movers have yet to arrive with their earthly possessions. Stay-at-home dad Mack, an easy-going jazz aficionado and published author in the midst of working on his sophomore novel, keeps suspiciously sniffing at the air in the kitchen (turns out, there’s mold lurking behind the walls). Plus, he also writes articles about food—and the gas range is inconveniently broken.

Meanwhile, cute Clark quickly finds an eager fan base: two soon-to-be sixth-grade classmates who are precocious girls—petite Ambrosia (Oona Laurence) and gangly Julie (Miranda McKeon). Ambrosia, in particular, is excited by his arrival, proclaiming, “We like totally needed a black kid. This town is SO white!” The pair entertain their new friend by showing off their inappropriately suggestive dance routine set to the music of a hip-hop performer known as 2 Bit, who we learn from Julie, “used to be a ho.” This is all a prelude to Ambrosia’s eventual attempts to put the moves on Clark at some point when they are alone in Julie’s unsupervised home.

Matters go downhill when Ambrosia’s single mother (Christine Taylor, smartly navigating a difficult role) catches her daughter and Clark semi-innocently goofing around on Julie’s bed. All this hyper-sexuality at an early age is rightfully treated with the seriousness it deserves and eventually builds to a much-needed clearing of the air between neighbors. But it also drains nearly all of the humor out of the movie. Sorrows are drowned in alcohol and cigarettes, arguments break out, an act of vandalism occurs—and assumptions and accusations are made before a truce finally is called. Not even a lively bout of karaoke involving group sing of Gilbert and Sullivan as well as off-key Spandau Ballet solo can lighten the mood.

“Little Boxes” doesn’t manage to summon as much unique insight into prejudice as screenwriter Annie Howell and director Ron Meyer probably expected to achieve. But what keeps their movie watchable is that Lynskey, Ellis and Jackson are completely believable as a loving family unit going through a rough patch concerning their sense of identity and place as they uneasily adapt to a foreign and sometimes difficult situation. We want the best for them, despite their own occasional misguided judgments about people. But we would also like a better and more ambitious film for them, too, one that doesn’t tell us something we already know and seen before. And, for those who are wondering, you will indeed hear a piano-heavy instrumental rendition of the song “Little Boxes” as the end credits roll. Too bad the lyrics are actually the best part.