“Lion” sneaks up on you as it proceeds to pluck your heart strings with its little cat feet. Then, before you know it, tear ducts will be brimming and your entire being will be awash with incredible joy but also a splash of bittersweet sorrow. At least that is what happened to those around me during the course of this incredible true story about a five-year-old Indian boy named Saroo, whose life is changed in 1986 after being separated from his idolized older brother, ending up more than a thousand miles from his home and family.

It's little wonder that “Lion” has collected quite a few audience awards at festivals since premiering in Toronto in September. Truly intelligent crowd-pleasers that avoid blatant manipulation are a rarity, but director Garth Davis (TV’s “Top of the Lake”) and screenwriter Luke Davies mostly keep any sentimental overload at bay until the very end—and, by that time, it is exactly what the audience needs and the film deserves.

Emotional triggers might arrive at several points during this decades-spanning tale of longing and loss that is also a mystery about an unknown past. For me, the killer moment was when the adult Saroo—in the form of a beefed-up Dev Patel, whose 2008 breakout film “Slumdog Millionaire” serves as a sort of companion piece to “Lion”—finally and somewhat guiltily confesses to his Australian adoptive mother, Sue, that he has been spending countless days doing research while seeking out his birth family via Google Earth.

The reason for his secrecy? He did not want to hurt the two incredibly generous and supportive people who rescued him from a Dickensian existence filled with poverty, hunger and potential abuse after being taken to a big-city facility for homeless street children. Being adopted as an infant myself, I know that feeling all too well, which is why I still refer to my mother and father who raised me simply as “my parents,” with no qualifier.

But that is topped soon after by a revelation shared by Sue, a tower of maternal tenderness and immense devotion embodied by Nicole Kidman, who is excellent despite a distractingly awful curly red wig. She uses the occasion to finally explain to Saroo exactly why she and his father, John (David Wenham, best known as Faramir in “The Lord of Rings”), decided to adopt him. Kidman, herself an adoptive mother of two, delivers her words with such nakedly honest emotion, all the Kleenex in the world won’t stop the ensuing flood.

Not that you need to be adopted to be so touched. After all, the primal fear of suddenly becoming lost and separated from those you care about most is a universal one. The first 40 minutes or so of “Lion” preys upon such anxiety, heightened by its visually poetic boy’s-eye-view camera work by Greig Fraser, in a way that anyone can relate.

What is truly amazing is that the lion’s share of the acting during this early stage is by a untrained newcomer, Mumbai native Sunny Pawar, who won the part after thousands of children were screen-tested. The kid is a natural, equal parts waif and rascal with an expressive face that perfectly reflects his state of mind from scene to scene while often not saying word. Nothing against Patel, who has grown immensely as a performer, but without the groundwork laid by little Sunny, “Lion’s ” onscreen roar would definitely be more than a bit muted.

In fact, the key relationship is the one the young Saroo shares with his adored older brother, Guddu (an engaging Abhishek Bharate), that is established right off the bat. While their hard-working single mother watches over their sister, the pair goes off to steal coal from trains to trade for milk. One night, Saroo begs Guddu to take him on his rounds as he sneaks onto empty trains for dropped money and other lost items. But they become separated after Saroo falls asleep on a station-platform bench. When he awakes, he panics after finding himself alone and boards a locomotive that suddenly begins to move and doesn’t stop until it arrives in the bustling city of Kolkata (formerly Calcutta).

Saroo can’t speak the local language—Bengali as opposed to Hindi—and he can’t even pronounce the name of his village correctly. Eventually, he is reduced to sleeping in tunnels and stealing food from public shrines. But somehow his innate street smarts kick in, allowing Saroo to survive long enough to be happily rescued from a potentially dire fate.

The later portion of the film that unfolds after Saroo is adopted can’t compete with such a compelling opening, but by then we are fully invested in what will happen to this now grown man. As Patel takes over the role, we see a bright and confident Saroo enroll in a hospitality course in Melbourne and fall for a fellow classmate (a mostly wasted Rooney Mara in supportive girlfriend mode). The one downside is when his parents also adopt a much more traumatized and distant Indian lad to be his new brother, a stark contrast to his deep trusting bond with Guddu. All it takes is a run-in with an Indian fried-dough treat known as jalebis served at a party to eventually ignite Saroo’s hunger to reconnect with his roots.

That search requires Patel to brood, stroke his beard and obsessively sit in front of a computer as his apartment walls increasingly look like a detective’s patchwork paper-trail of photos and other clues to a puzzle—not exactly high drama. But all is forgiven when his memory clicks in and his hard work pays off beautifully. Let’s just say if you are human, there is no way that “Lion” won’t move you. 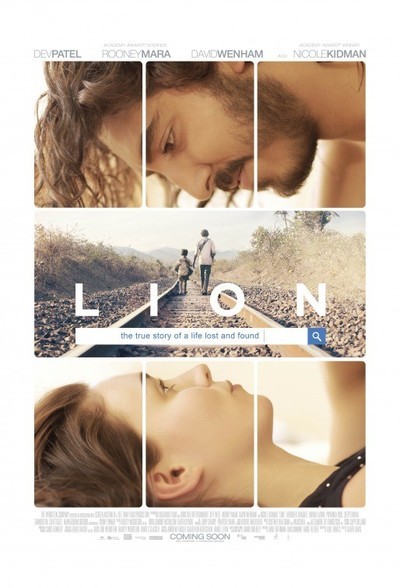 Rated PG-13 for thematic material and some sensuality.

Written (based on the novel by)