Writer/director Lauren Miller Rogen crafts stories about women who have everything, or think they do, just so she can take it all away from them in the first ten minutes of the movie and see what happens.

Rogen co-wrote “For a Good Time Call…,” in which she also starred as a determined, organized, young woman who thinks she has everything figured out until she gets dumped by her fiancé. “Like Father” has a similar premise, only more publicly humiliating, with Rachel (Kristen Bell) getting dumped in the middle of the wedding ceremony.

We first see Rachel in close-up, giving detailed instructions over her cell phone about an upcoming meeting. And then the camera pulls back, revealing that she is in her wedding dress. The processional music is about to begin, so she shoves the phone into her bouquet and starts down the aisle.

The officiant is her boss, and he speaks as warmly about her as he can, given that he has apparently been called on because she has no life outside of work. He shares some personal details about the groom, and then turns to Rachel. “If there is such a thing as a brand emergency, she would be an EMT.”

Then her phone drops out of the bouquet. The groom realizes that she will never really get away from her job and he calls off the wedding.

And then it gets worse. Harry (Kelsey Grammer), the estranged father Rachel has not seen since she was five years old, is at the wedding and saw it all. She races out and he races after her. They end up getting drunk together, and then they wake up on the cruise ship that was supposed to be her honeymoon trip.

This provides an opportunity for (1) product placement for the luxury cruise line, so pervasive the movie is almost an infomercial, (2) the expected developments: accusations, apologies, exchanging of confidences, grudging respect, growing warmth, tears, laughter, reconciliation, and a musical number, and (3) some realignment of work/life balance.

In other words, this is a safe, sometimes synthetic story of two people in pretty settings finding a way to overcome their history and connect to one another, the beats all scheduled as conventionally as in the interchangeable comfort food movies on the Hallmark Channel.

There are traces here of a more ambitious, less predictable film. I’m guessing that in some earlier version we saw more of Rachel’s client, a couple who are “hippie potato chip makers from upstate.” They seem to be from some draft of the story intended to make a point about abandoning the rat race for a more fulfilling life. And Harry and Rachel bond suspiciously abruptly with the three cute couples assigned to their dinner table on the cruise: one young, one old-timers, and one mid-life newlyweds. All are worth more screen time and should have had more substantial roles instead of too many scenes of the cruise ship’s cheesy entertainment.

A bright spot is Seth Rogen in one of his most low-key and appealing roles, probably because the director is his wife (he appeared briefly in “For a Good Time, Call…” as well). Miller deserves credit for giving his character some disheveled charm without making him into an easy happily-ever-after ending for Rachel.

Bell and Grammer are consummate pros. They cannot make this material surprising, believable, or even particularly moving, but they do their considerable best to hold our attention and are always watchable. Their scenes together are high points, even when the big speeches are thinly conceived. If the discussions about whether Rachel really needs to be on her phone at a gorgeous secluded waterfall and whether Harry has really confessed everything Rachel should know get tedious, the evident enjoyment that Bell and Grammer have in being together, especially in their silly karaoke number, make us happy to come sail away with them for a little while. 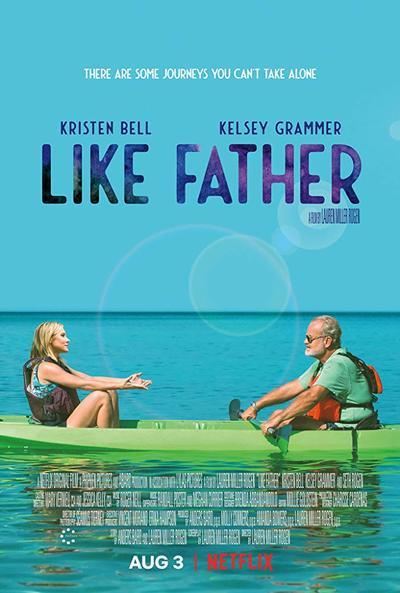