Lance Daly’s “Life’s a Breeze” is as amiable and windswept as its title promises, for better or worse. One wishes it gusted a bit more often, but the always-great Fionnula Flanagan and truly charming newcomer Kelly Thornton nearly justify the film’s more sitcomish, hackneyed scenes. Nearly. Having adored Daly’s wonderful coming-of-age-meets-fairy-tale film “Kisses,” I was hoping for a bit more of that magic in “Breeze,” and, other than the aforementioned two performances, one has to dig through too many false, forced comedy beats to find them here.

Nan (Flanagan) is a good old-fashioned Irish hoarder. The Dublin resident has never been much trouble to her neighbors and generally keeps to herself. Her unemployed son Colm (Pat Shortt) joins forces with his other family members to give Nan a gift she could never give herself—a clean house. Niece Emma (Thornton) takes Nan out for the day, and they return to a spotless home. Old Chinese takeout menus, newspapers, broken kitchen appliances and an outdated TV: all gone. So is the old mattress Nan has been sleeping on for decades. And shoving her money in because she doesn’t trust the banks. That’s right: there’s a million Euros in a mattress now winding its way through the Dublin recycling system. A wacky journey to find it ensues.

Sort of. While “Life’s a Breeze” has an undeniably sitcomish presence, it’s almost as if the realist in Daly refuses to embrace the potentially wacky set-up. And so we’re stuck with a film somewhere in the middle. It's not as offensively slapstick-y as it could have been but it's not realism either. It's caught in the boring center of those two ends of the spectrum.

From a filmmaking standpoint, “Life’s a Breeze” is something of a jumble. There’s a whimsical score that sounds like a Mumford & Sons bridge on repeat that underlines the quirky tone in rather annoying ways. And the film looks flat, enhancing its sitcomish underpinnings. It might have worked as a week-long series. “Nan and Her Annoying Clan.” When the stripper firefighter showed up for Nan’s 80th birthday, I thought for sure I was watching something originally planned for BBC.

To be fair, character beats between Flanagan and Thornton, particularly in the final act, are truly effective. Flanagan has always been a performer who can do a lot with very little, and Thornton has the kind of natural screen presence that announces someone on the film scene. She’s the one performer here who truly feels in the moment; at least partially because it feels like she’s the one character Daly truly likes. Daly’s skill with slice of life connects in the scenes between Nan and Emma, and they nearly justify the piece in just a few truthful glances. These are two interesting characters brought to life by intriguing actresses. Too bad there isn’t anything in “Life’s a Breeze” to support them. 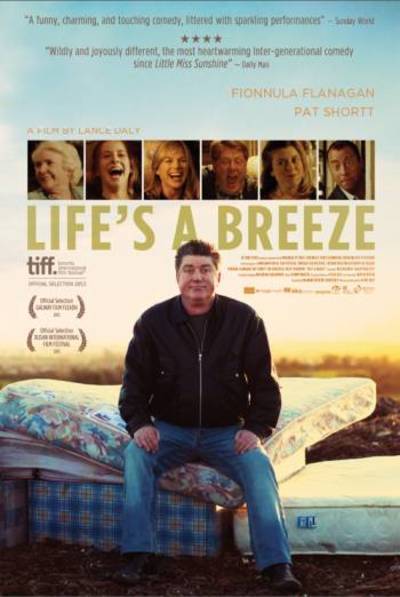