“Everyone has their story.” Director Jon Alpert clearly believes that line, said near the end of his newest documentary. The HBO producer has devoted decades of his life to three stories of people caught in the grip of crime and addiction in Newark, New Jersey. In 1989, Alpert released “One Year in a Life of Crime” on HBO, which filmed his trio around Newark as they committed increasingly dangerous criminal acts. He followed up with his subjects in “Life of Crime 2” in 1998. Now, in a manner that’s reminiscent of Michael Apted’s “7 Up” series, he has returned again for a final chapter, one that assembles footage from 36 years of documentary filmmaking in “Life of Crime: 1984-2020,” premiering tonight on HBO after a brief run at festivals, including Doc NYC and Venice. It’s a powerful piece of work that details how communities on the edge of lawlessness and poverty were overwhelmed by drugs in the ‘80s and ‘90s, leading to cycles of addiction and violence that can become impossible to escape. It’s not an easy watch, but it’s a moving one.

“Life of Crime: 1984-2020” starts with an almost unsettlingly casual approach to the petty criminal underworld. Alpert follows three people around Newark: Freddie Rodriguez, Robert Steffey, and Deliris Vasquez. These three have the perceived invulnerability of youth as they dig deeper into their own bad habits like theft, drug use, and prostitution. The early years of the film verge on what could be considered exploitation more than later years, such as when Alpert catches domestic abuse or seems to linger on a needle going into a vein. It’s an interesting study in the development of a filmmaker and a human being as the project gains notable degrees of empathy as it goes along, likely charting how much Alpert went from someone “exposing a life of crime for HBO” to someone who clearly cared about his subjects. You can see that growth in the final product as he became attached to his subjects and their plights.

Rob is the most charming of the three, a guy who starts with shoplifting and robbery but develops a pretty serious drug addiction that begins to impact the severity of his crimes and his ability to stay clean after stints behind bars. Freddie is the heartbreaking story, a guy who lands behind bars and watches his addiction take over his life, even after contracting HIV. Upon release, he tries so hard to stay clean and take care of his kids, but life doesn’t seem built to help guys like Freddie. Finally, there’s the rollercoaster ride that is the story of Deliris, once a girlfriend of Rob’s and a severe heroin addict. Even her children know how to look for track marks to make sure she hasn’t fallen off the wagon. She becomes a study in recovery until Covid-19 derails her life. How her life was impacted by Covid feels like it could have sustained its own documentary—and is rushed here in the final minutes—in that the story of how the pandemic impacted this country in ways outside of just catching the virus is only now being told.

What first is like a study in the criminal underworld becomes gradually about how much addiction controls the narrative in parts of this country. These three will often be on the right path in one segment and then Alpert jumps forward a couple years and they’re addicted again, almost unrecognizable at times. The demons always seem to come back, and it doesn’t help that the safety nets that should be put up by this country keep breaking. Rob has a good job and then gets fired because they find out he was a convict. Freddie wants to get his shit together but can’t find a place to live—he even has a parole officer who tells him that he has to live in a hotel he can't afford instead of staying with the addicts in his post-prison home. The place in which Deliris lives has a dozen dealers in the yard, almost calling her name while knowing she’s trying to get clean. Even the people who seem the most together fall apart and the ones who seem likely to break find a way to stay whole. And Alpert shows it all, capturing the near mundanity of addiction, how it can dictate existence when it's got a grip on someone. It’s really a documentary about the stranglehold of drugs more than it is about traditional crime.

These stories of success and failures become very moving. You think of all the people you pass in life and how many of them have stories like this, unpredictable lives of both crime and redemption. To be fair, some of the segments in “Life of Crime” feel oddly truncated while others go on longer than they should. There’s an editing rhythm that often involves big jumps—it really covers 1984-2002 and then rushes to the present day—and I wondered if there isn’t a series version of this that’s even stronger. With all the docuseries I’ve seen lately that stretch a feature’s worth of storytelling to hours of episodic television, it’s rare to see something that's so rich that it could have been even longer than its two-hour runtime. Yes, everyone has their story, but the question is if we’re willing to listen to them.

Premieres on HBO tonight and will also be available on HBO Max. 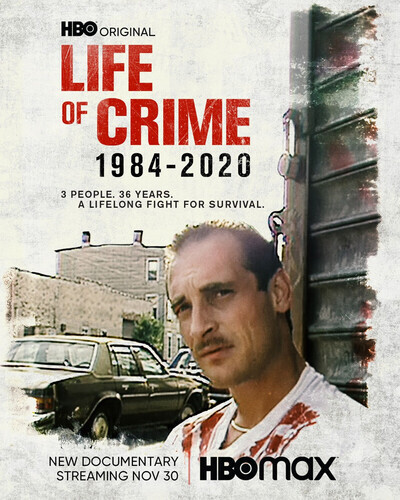 Robert Steffey as Self

Freddie Rodriguez as Self